Scrawled on doors under a gothic-revival arch at St Patrick’s Cathedral in East Melbourne – where Cardinal George Pell’s accuser had alleged he was sexually abused – was graffiti next to a dripping upside-down cross.

The night after Cardinal Pell was released from jail after the High Court ruled there was reasonable doubt requiring his acquittal of charges that he abused two choirboys in the 1990s, graffiti was also spray-painted on the cathedral forecourt. 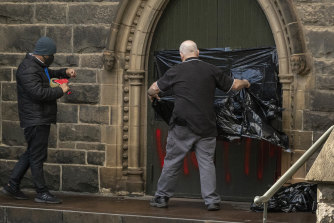 A child’s trike and ribbons were tied to the gates of the Carmelite Monastery in Kew where Cardinal Pell spent his first night of freedom.

Colourful ribbons tied to fences, an initiative of the Loud Fence movement, first began appearing in Ballarat during the Royal Commission into Institutional Responses to Child Sexual Abuse.

The movement has spread worldwide as a show of solidarity for survivors of childhood sexual abuse.

Melbourne Archbishop Peter Comensoli said "yes" when asked if he was distressed by the vandalism at St Patrick’s but said he was “also not entirely surprised”. 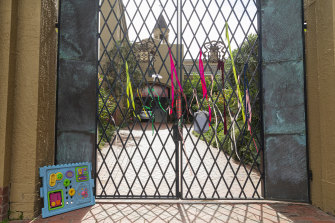 Ribbons and a child’s toy are seen at the gate of the Carmelite Monastery in Kew.Credit:AAP

“There remains such strong emotions around all of these matters,” he told 3AW.

“I think everyone is going to continue to hold their own particular position on all of this. I would hope that people in the cooler light of the evening will consider what the High Court judgment said and see that in its legal context.”

Annie Carrett, the director of the office of the Archbishop of Melbourne, said there would possibly be some extra security at the cathedral “but we are not looking to create an atmosphere of fear”.

“We will be very mindful of the pain a lot of people are going through in a difficult time,” Ms Carrett said.

She said people would not be attending church over Easter due to coronavirus and the Mass would be streamed online.

Ms Carrett said Cardinal Pell was not part of the Catholic Archdiocese of Melbourne and he would not be mentioned in the mass.

“Our mass is for our people – it is a key time in our faith life and not a time for sending other messages,” she said.

“Jesus’ resurrection will be the message that we are sharing. We will be speaking of our Easter message – this is a great joy for our people. Other matters are not part of our faith experience at this time.”