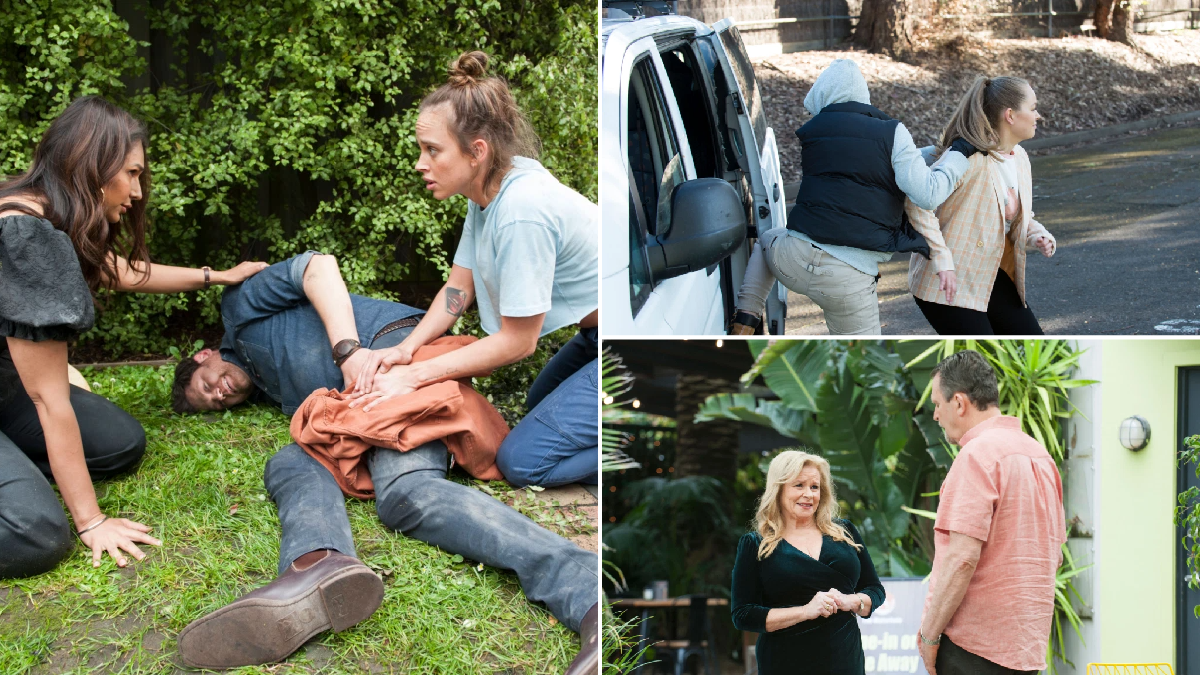 It’s a deadly week in Neighbours this week as the lives of at least three locals are in danger. Who’s most unlikely to make it through to next weekend?

Things are looking bad for Hendrix (Benny Turland) who is living in such fear of his life he steals himself a gun, but this triggers a whole other chain of events that could mean him losing a loved one – as well as the fact Kane (Barry Conrad) is still out for his blood.

Shane (Nick Coghlan) is left bleeding to death because of Hendrix’s actions – can Dipi (Sharon Johal) save her estranged husband’s life?

And Harlow (Jemma Donovan) is another victim of Hendrix’s tragic actions when she finds herself being bundled into a van and the centre of a hostage situation.

Elsewhere, Kyle (Chris Milligan) could be the cause of a near death experience for someone else when he accidentally serves deadly wild mushrooms in his special dish.

And Sheila is likely to die…of embarrassment when one of her hair-brained plans goes wrong, again.

Here’s what’s ahead in Neighbours.

Sheila isn’t ready to give up on Clive just yet and has one more plan up her sleeve. She manages to give Des the impression Clive’s intentions are not pure and Des concocts a plan to get Clive to reveal himself. He and Sheila embark on a fake date with the intention of getting Clive to reveal his jealousy, but it goes disastrously wrong. Ultimately it results in the decimation of Des’ friendships with Clive and Jane, and now it’s down to Sheila to try and fix things. She realises her relationship is a lost cause, it’s time to accept defeat.

Kane’s threats have Hendrix’s nerves on edge and he decides he has to do something serious to protect himself – he steals a gun. Jay is horrified when he finds out what his friend has done and immediately confiscates the firearm. Jay decides to put it somewhere for safe keeping and chooses the pizza oven as the best place. What will Hendrix do without the gun to protect him? And will happen when that pizza oven gets fired up? Well…

The pizza oven suddenly explodes sending Ramsay Street residents flying. But as they start to dust themselves off they realise there has been a casualty, Shane.

He’s been shot through the leg and is bleeding badly, Dipi is by his side desperately trying to save his life. He’s rushed to hospital where his family learn he needs urgent surgery. Jay is consumed with guilt and confesses to his part in his dad’s injury. Hendrix is also forced to confess to Hendrix and Chloe, who makes him face the police. But they still haven’t dealt with the problem that is Kane…

Kyle entered the Best Dish of Erinsborough in a bid to pay a loving tribute to his late dad in Neighbours, but he should have stayed the heck out of the kitchen. He foolishly bestows the task of ingredients gathering on Roxy, who forgets one key think – the mushrooms. Spotting some wild ones growing she decides those will do, and proudly trundles back to Kyle with her foraging. He snaps them up and puts them in his gravy, which proves to be an absolute hit with the judge. The judge is later hit with serious gastro problems, she’s been poisoned by something she ate at the Tram. The penny drops for Kyle, Roxy gave him death cap mushrooms to put in his food. Will he admit what he’s done?

Hendrix is starting to worry about Harlow. She disappeared after he confessed and he hasn’t seen her since. At first he thinks she’s just in a huff, but then he learns Paul and Terese haven’t heard from her either. With Kane still on the loose this means bad news. What’s happened to her? He’s right to worry – she’s been kidnapped.

Nicolette’s cooks up a dangerous plan

Nicolette is almost in as much danger as Hendrix now that she’s been dragged into the underworld of gambling. David and Aaron learn of what she’s done and are disgusted, she really isn’t suitable to be co-parenting their child. But when she learns of what’s happened to Harlow she has an idea, to get hold of the blackjack gamers and squeeze them for information. It’s a good idea, but she’s about to put herself in serious danger too.