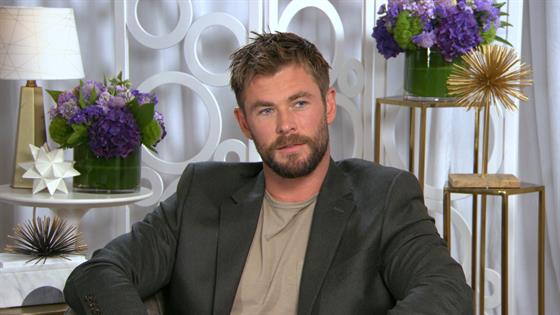 Chris Hemsworth won’t be bringing down the hammer any time soon.

On Tuesday’s at-home episode of The Late Show, Cate Blanchett revealed that she got to keep a valuable prop from the Thor: Ragnarok set: Thor’s hammer.

While catching up with host Stephen Colbert, the Blue Jasmine star told the funnyman that she has been doing a lot of cleaning while practicing social distancing, which has resulted in her finding souvenirs from her previous films.

“You know how that Thor film that was shut down in Australia? It wasn’t anything to do with COVID-19. It was because I got the hammer,” she proclaimed as she held up the Marvel superhero’s hammer. “I have Mjölnir here. And, look at how easy I can lift it.”

In addition to being the owner of Mjölnir, she showed off some of the goodies she took home from The Lord of the Rings set as well.

“I’ve been clearing out the attic and…I was looking for my ears—for my elf ears and I couldn’t find them,” she said. “And I know the kids have Hobbit feet somewhere and I thought, ‘Oh, I’d love to show them to you.’ Couldn’t find them. But I did find Tauriel’s fighting blades.” She added, “I mean, some people stock toilet paper, but I’ve got these.”

As Cate proudly displayed the blades to the late night host, Stephen couldn’t help but point out that she didn’t play Tauriel in the film. “Wait, you have Tauriel’s fighting blades?” he asked. “Why do you have Tauriel’s fighting blades? Why doesn’t Evangeline Lilly have them?” Realizing she didn’t have an answer for him, Cate joked, “Actually you did not see those. Don’t speak to Evangeline Lilly anytime soon.”

Switching gears, the duo discussed how Cate is faring since adapting to homeschooling her four children and she gave Stephen a little taste of her teaching style.

“I do have a profound respect—I always have—for teachers, but you know, I’m more like the homeroom teacher who has no particular skill, but I can corral people into doing things,” she joked. “I mean, my 11-year-old—my 5-year-old frankly, has surpassed me in her algebraic skills, so I’m not a lot of use. I’m okay with geography, but they all seem to not like geography.”