Sophie Wessex joined a counselling shift today at a call centre offering support for vulnerable children as she continued her volunteering amid the pandemic.

The Countess of Wessex, 55, was pictured chatting to staff as she met with the team at the Childline and NSPCC headquarters in London, which is a confidential service for under-19s to seek help and support.

Sophie, who has been principal patron of the NSPCC since taking over from the Queen in 2016, appeared eager to get stuck in, and was seen typing at a desk in the office before thanking volunteers for their work during the lockdown.

The pictures show the royal, mother to Lady Louise and James, Viscount Severn, deep in thought while listening to staff about their vital service and how they have coped with calls during the crisis. 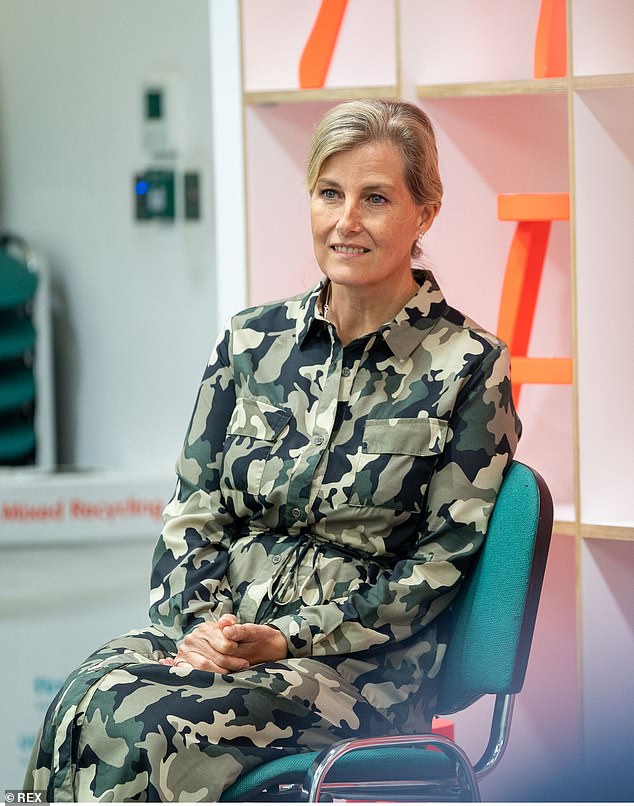 The Countess of Wessex, 55, was pictured listening to staff as she met with the team at the Childline and NSPCC headquarters in London

The royal donned a camouflage-style long shirt dress with a cross-body black bag and swept her hair up with a clip as she got to work in the office.

Since the coronavirus pandemic, Childline has been forced to alter its usual 24-hour services, with counsellors only able to take calls or online messages between 9am and midnight.

In March, Sophie highlighted some useful resources to help support and offer advice to those who are looking after their children at home during the coronavirus pandemic. 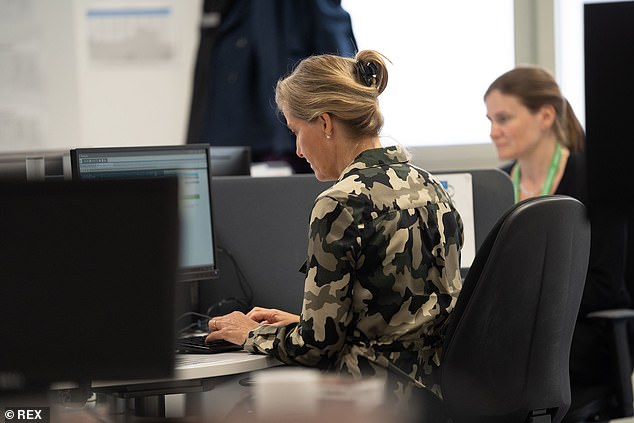 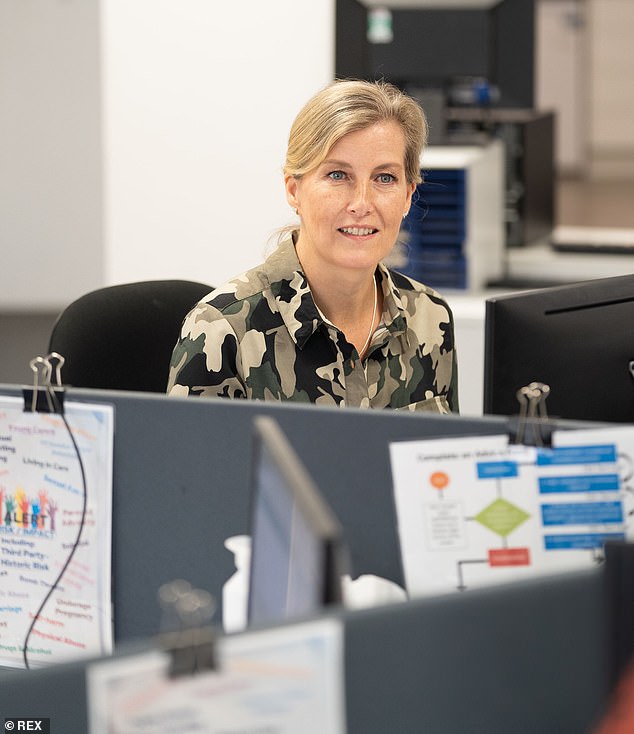 It comes after Sophie, who has been at the forefront of the royal family’s response to the coronavirus crisis, joined The Saints Foundation last Friday to help pack food and prescription parcels for the vulnerable.

Sharing the news on Twitter, the Southampton-based charity posted: ‘We were delighted to be joined by HRH The Countess of Wessex this week, who volunteered with us at @FairShareUk and on our Prescription Delivery Service.

‘A real privilege to show The Royal Family how we are transforming lives in and around Southampton.’

In a video clip shared on the social media channel, Sophie could be seen donning a high-vis jacket and getting stuck into the volunteering effort. 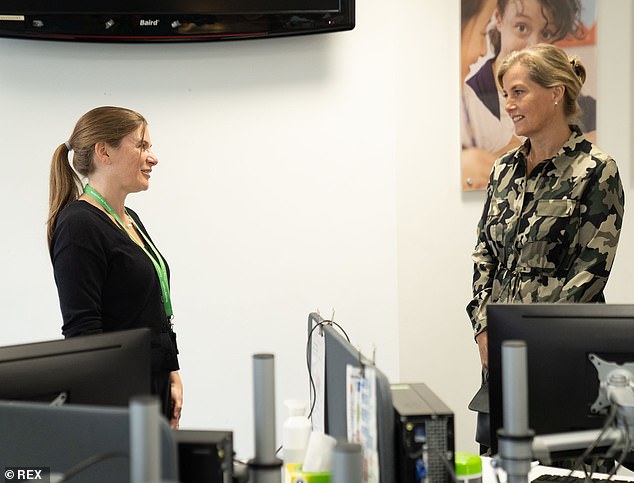 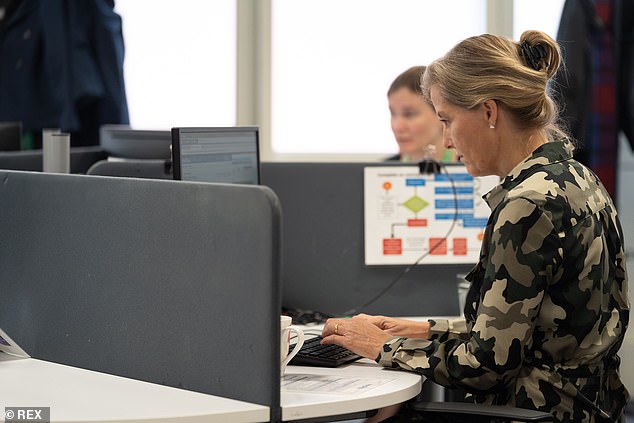 And Sophie appeared relaxed as she beamed and chatted with other volunteers and staff.

The visit came days after she opened up about adjusting to life in the royal family, speaking of her ‘frustration’ and admitting it took her a while to ‘find her feet’.

She told The Times she had to reduce her expectations of what she could actually do and ‘take a really big step back’.

‘I couldn’t turn up at a charity and go, right, I think you should be doing this, because that’s what I was used to doing in my working life,’ she said. 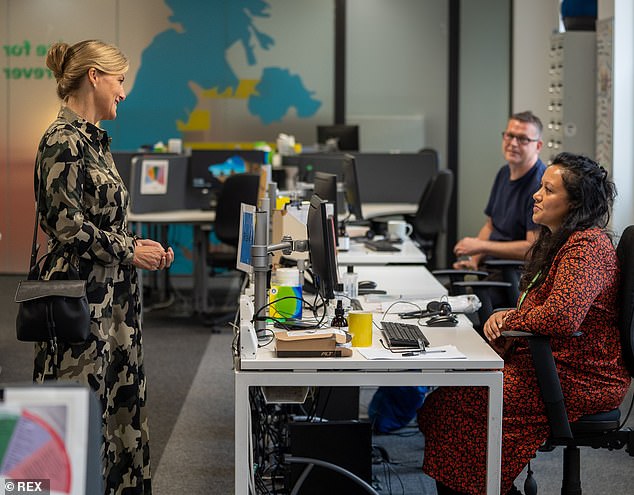 It comes after royal insiders said Prince Edward and Sophie would ‘step up’ and take on more public duties in the Queen’s absence during the crisis.

Sophie, who was once described as the Royal Family’s ‘secret weapon’ by royal journalist and author Victoria Murphy, has played a key role representing The Firm throughout the pandemic, and has been seen volunteering at a variety of causes over the last few months.

Last month, she joined the group Nourish our Nurses, which is delivering meals to key workers, before meeting staff at St Peter’s Hospital in Chertsey, Surrey.

And to mark Eid, the mother-of-two was joined by her husband he Earl of Wessex helped pack food parcels at a mosque in Woking. 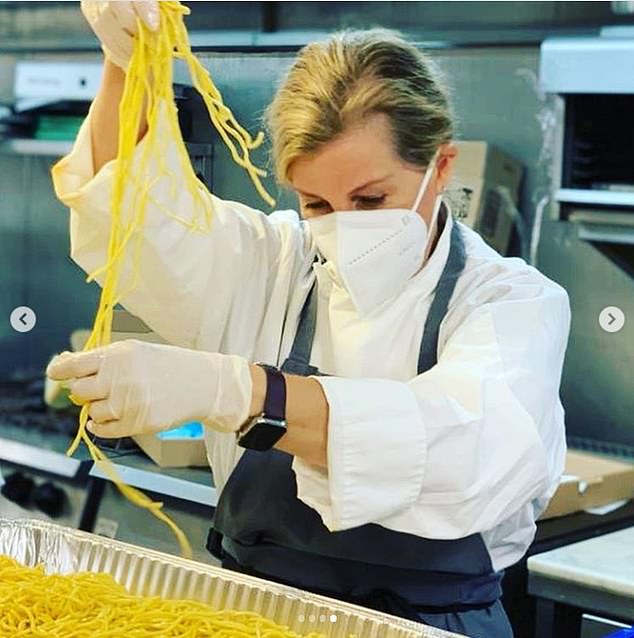 The Countess has spent the last three months volunteering for a range of worthy causes (pictured, in April making meals for NHS staff)

Earlier in the pandemic,  the royal has also volunteered alongside professional chefs making lunches for NHS staff battling the coronavirus pandemic and helped out at food banks.

Sophie has also joined video calls to various patronages, including the Thames Valley Air Ambulance, of which she is patron, to congratulate them on their work with the NHS during the crisis, and has helped publicise advice from the children’s charity NSPCC and the National Autistic Society.