Tiny shepherdess, three, who’s become a viral hit melts hearts as she tells This Morning how much she ‘loves’ her sheep Ethel

A three-year-old girl who became an internet sensation has melted hearts all over the nation after revealing how much she loves her sheep Ethel on This Morning today.

Barley, from Norfolk, who lives on a family with her mum Caitlin Jenkins and dad, won the under 8 sheep category at the greatest online agricultural show after sending in a video alongside her excitable sheep Ethel, nine.

But the adorable video entry not only won her the award, but after one of the judges posted the clip on social media, it has since received over 2 million views online.

And when presenters Holly Willoughby and Philip Schofield asked what her favourite thing about Ethel is, the tiny shepherdess adorably replied: ‘I love her.’ 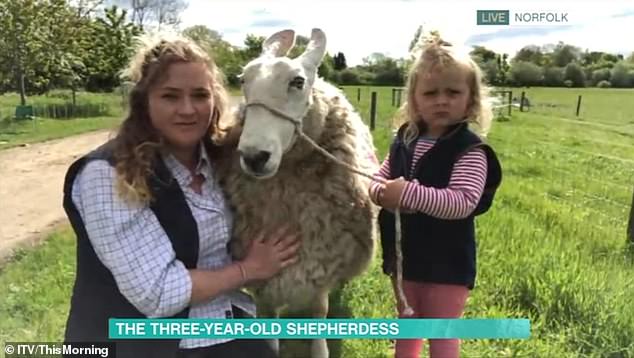 Barley, three, from Norfolk, appeared on This Morning with her mother Caitlin and sheep Ethel, nine, after her sheep-herding video went viral 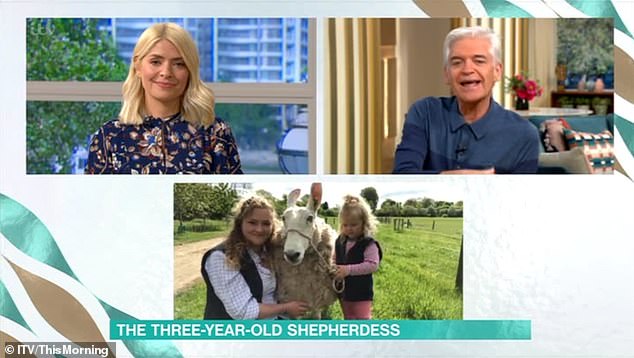 When presenters Holly Willoughby and Phillip Schofield asked what her favourite thing about Ethel is, she adorably replied: ‘I love her’ (pictured, on the show today)

In the original viral clip, Barley and Ethel can be seen going on a walk together, before the youngster orders the sheep to stand.

Then, Caitlin can be heard asking a whole host of questions, including what type of sheep Ethel is.

Barley replies: ‘White!’ before then correctly answering, “a Border Leicester.”

‘This is quite normal to us, but you know, it’s obviously got the cute factor and it’s making people smile – and they need to smile at the moment.’ 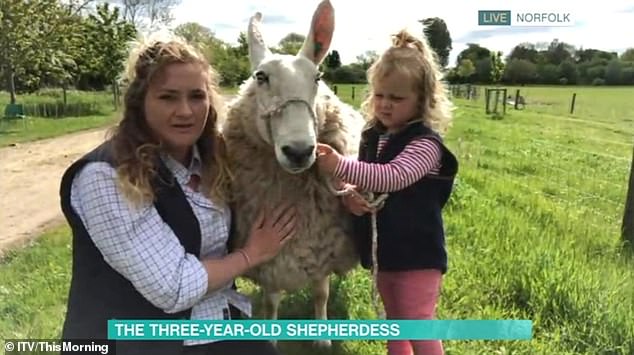 Those who tuned in were quick to take to Twitter to praise the ‘heartwarming’ moment Barley said she loved her sheep, Ethel (pictured)

And despite only being three-years-old, Barley is already an experienced shepherdess after being given her very own flock of 12 sheep for her first birthday.

‘We’ve got our own farm and we’ve got about 200 sheep but Barley has got her own flock of sheep which are Border Leicesters,’ said Caitlin. ‘She was given that flock of sheep for her first birthday.’

‘She loves the sheep. She loves helping us on the farm every day. She currently has 12 sheep in her flock and we breed them She would normally take them to the agricultural shows.’

Following the cute segment of the show, viewers were quick to take to social media.

‘When Phil asked Barley what was her favourite thing about Ethel and she said I love her, heart melting moment,’ wrote one, while a second agreed: ‘How lovely. Just watching Barley being interviewed by Phil and Holly on This Morning.

A third added: ‘Wow that sheep had big ears. Barley was so cute.’