Couple who taught themselves DIY transform an £8,000 former council bus they bought on eBay into a nomadic family home as they prepare to drive from Europe to Africa with their three children

A free-spirited couple have transformed a £8,000 former council bus into a nomadic home for their family after getting ‘sick’ of the nine to five work pattern and missing out on time with their children.

Self-taught DIY experts Thariea, 28, and River Paige, 27,  had never even hung a picture when they bought the 7.6m long ex-Bournemouth council eight-seater bus last March – with space for four additional wheelchairs and a driver.

However, they’ve since raised the roof, added six solar panels and kitted it out with modern furnishings to create the perfect family home for themselves and their children, Roman, eight, Arabella, six, and Nalu-River, 18 months, in an effort to pursue their dream of travelling through Europe to Africa when Covid-19 restrictions lift.

Self-employed children’s photographer Thariea and River who has just quit his job as a superyacht sign designer, have spent the last month living in the bus with their brood, which is parked in the drive of River’s parents’ house in Leicester. 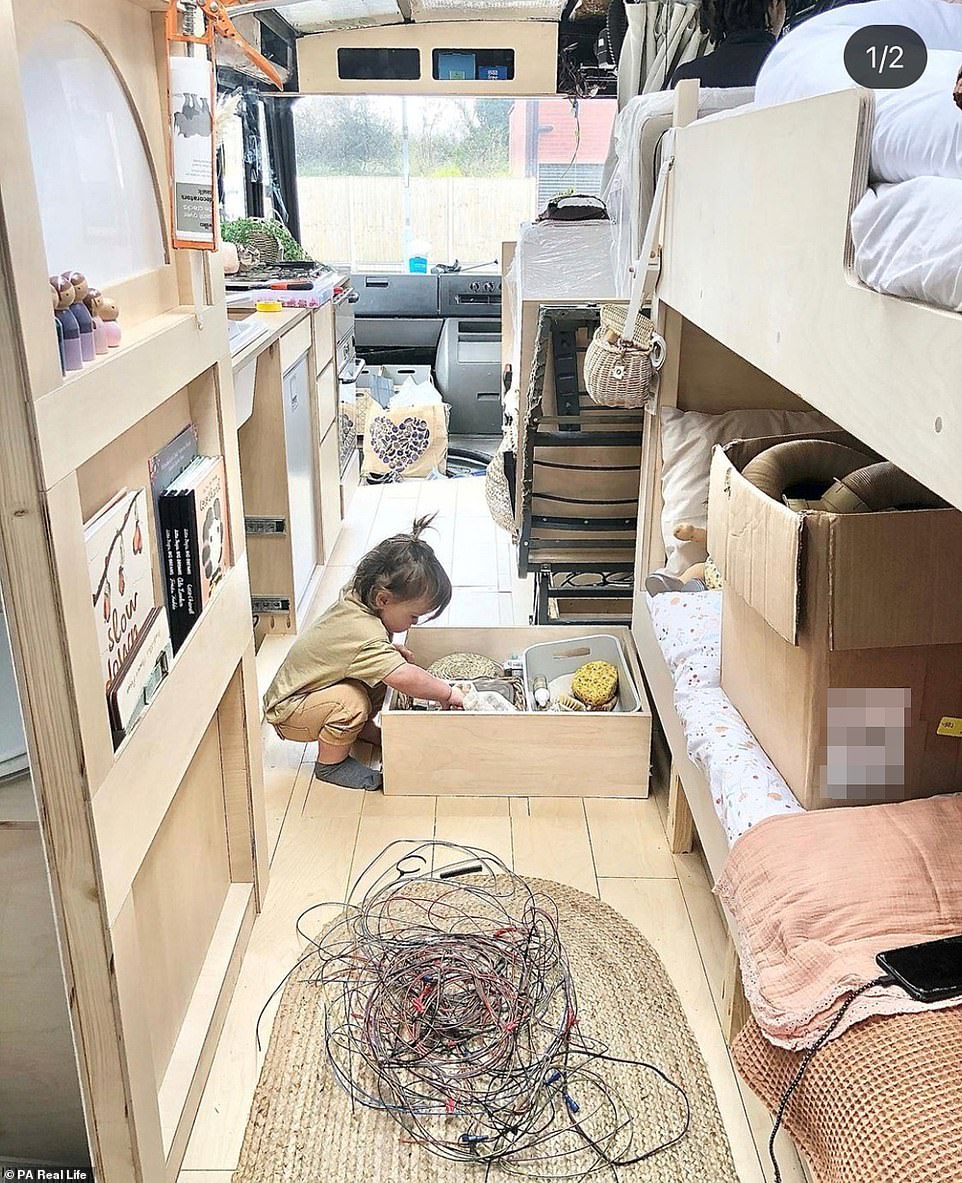 Thariea, 28, and River Paige, 27, have transformed a 2007 former Bournemouth council bus bought on eBay for £8,000 into a family home for themselves and their children, Roman, eight, Arabella, six, and Nalu-River, 18 months. Pictured: Baby Nalu-River inspects his new bus home 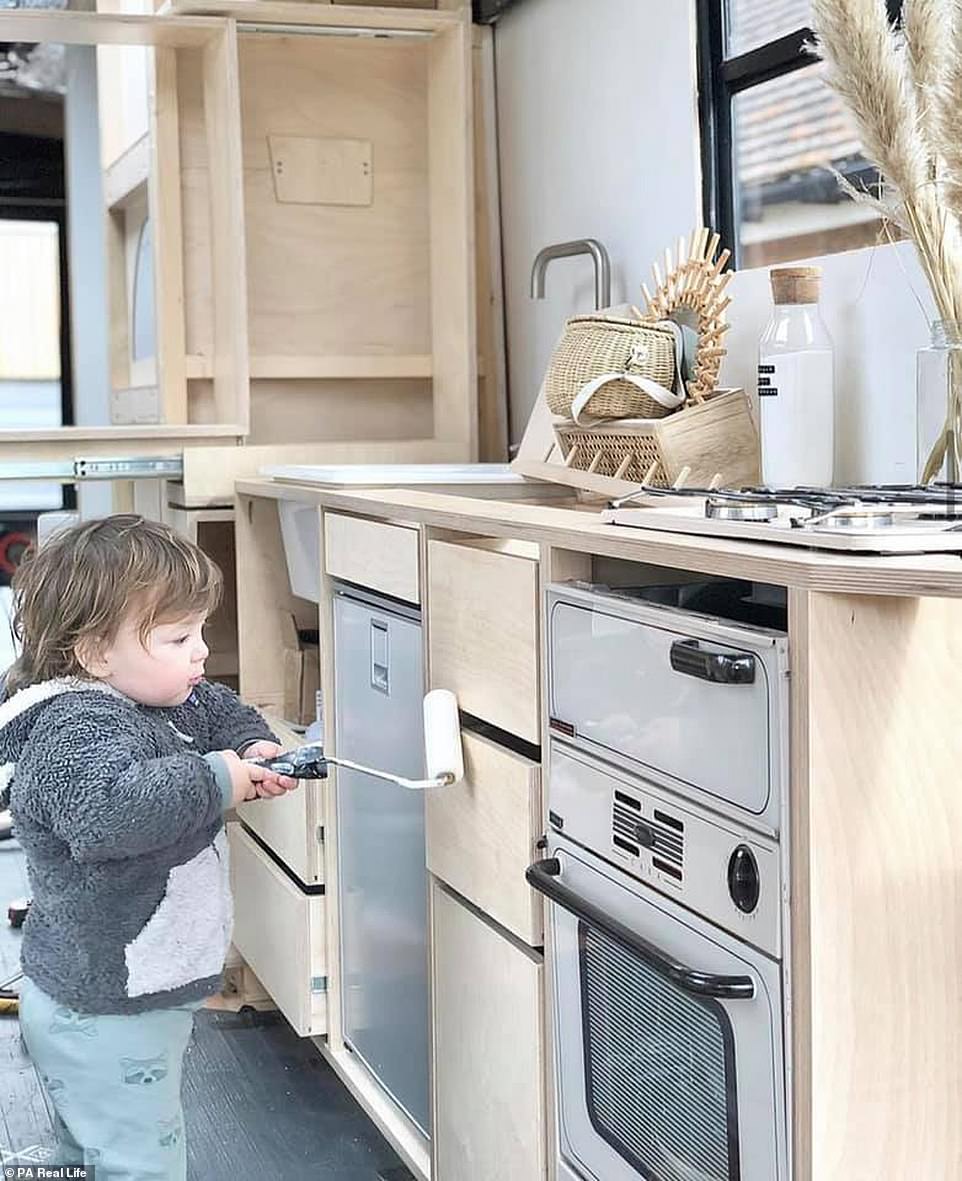 The self-taught DIY experts had never even hung a picture when they began transforming the bus, which was purchased just before the lockdown in March. Pictured: Nalu-River joins in the painting 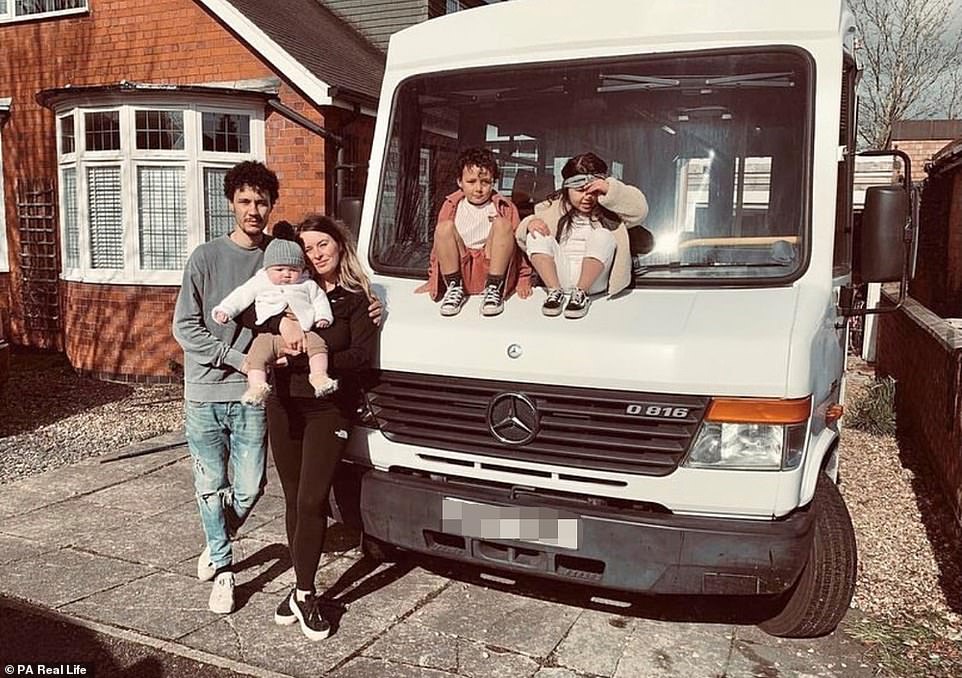 The family have been living in their new home with their children (left to right) Nalu-River, 18 months, Roman, eight, and Arabella, six, for the past month, currently parked in the drive of River’s parents’ house in Leicester 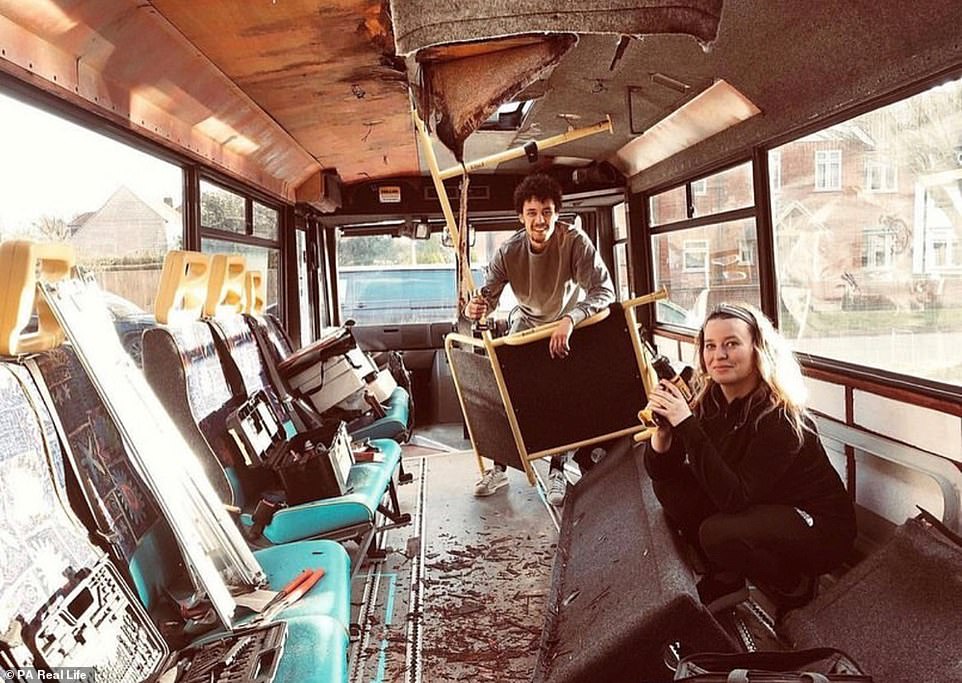 Thariea explained they haven’t finished overhauling the bus but after a one-night sleepover on March 27, the children didn’t want to leave. Pictured: Thariea and River get to work turning the bus into their new home

The couple who previously lived in a three-bedroom modern rented semi in Broughton Astley, near Leicester, explained that they enjoy living in the 2007 vehicle although they haven’t finished renovations.

Thariea said: ‘We’ve loved living full-time on the bus for the last month, even though it’s only 80 per cent finished.

‘The children were so excited that, after having a one-night sleepover in it on March 27, they wouldn’t leave! We’ve all been living in it ever since.’

The couple, who met when they were 15, had been saving to buy a house when Thariea’s dad Mark, 49, took them to a camper van festival in a Northamptonshire field four years ago and they had the ‘bonkers dream’ of having a home on four wheels.

But it took nearly three years before they put their plan into action.

Thariea said: ‘At first, although it seemed like a great way of life, we thought it was way out of our comfort zone and impossible.

‘Then we had our third child and one day early last year I texted River at work and wrote, ‘Let’s just do it’.

‘He agreed and we started looking to buy a bus and found one on eBay for £8,000 just before lockdown in March last year. 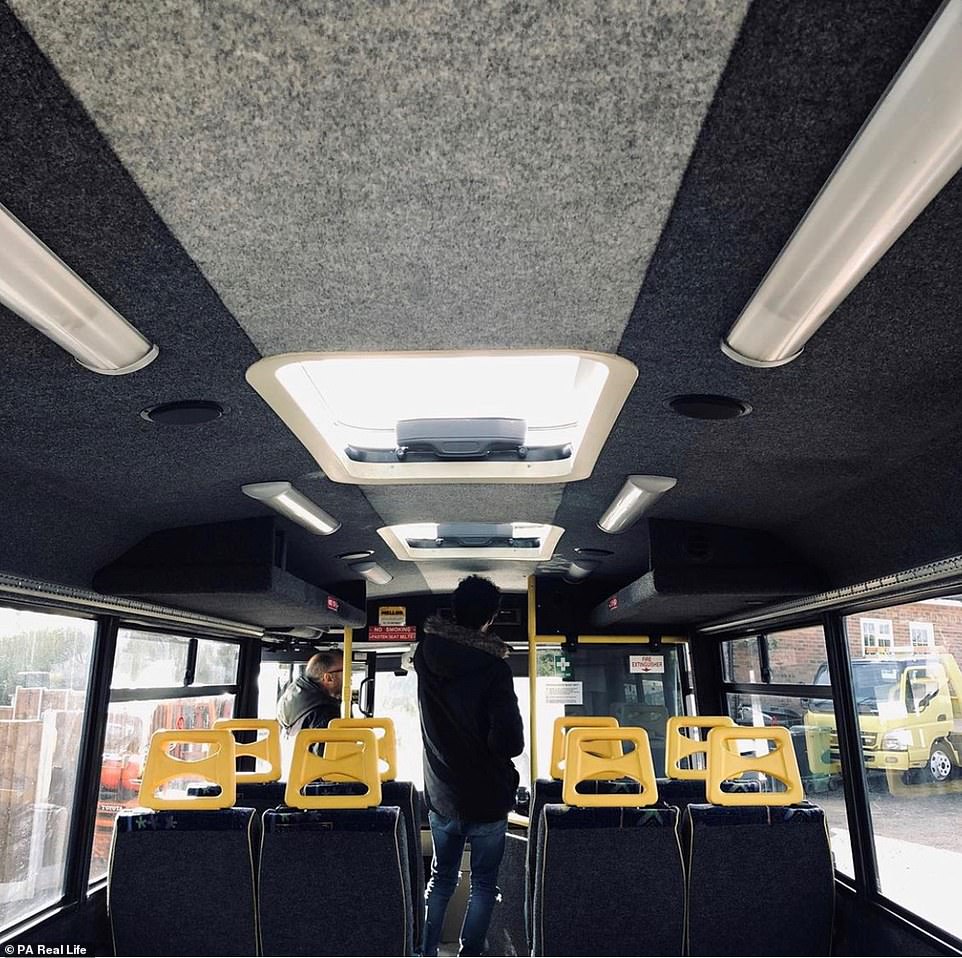 Thariea and River were inspired to pursue a nomadic lifestyle after attending a camper van festival in a Northamptonshire four years ago. Pictured: The bus before the seats came out 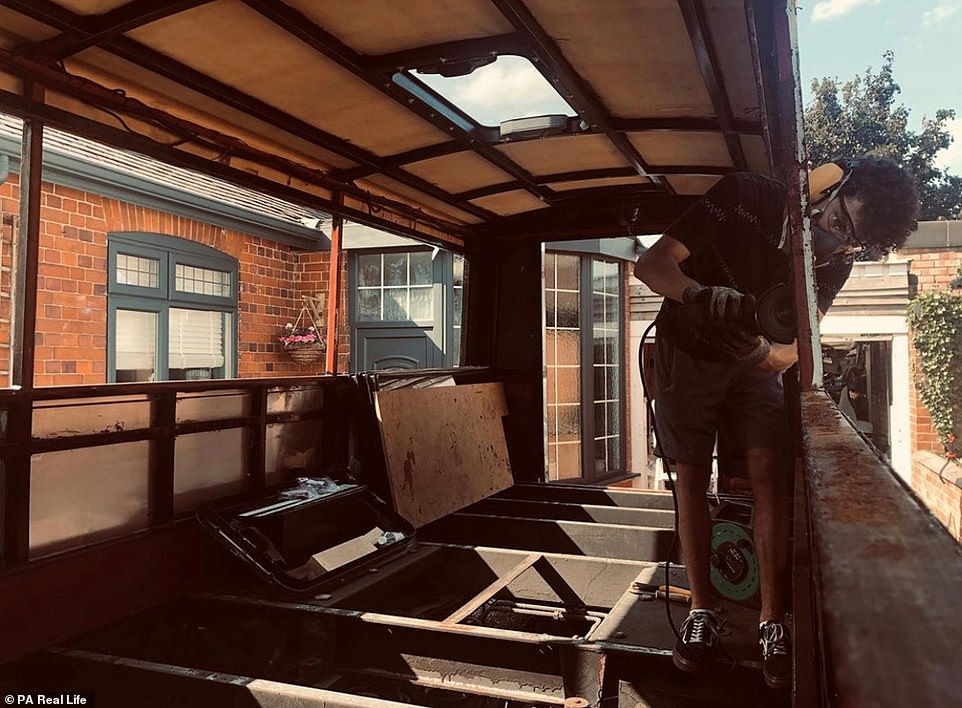 Thariea who met River when they were 15, said they decided to put their plan into action following the birth of their third child. Pictured: River working on refurbishing the bus 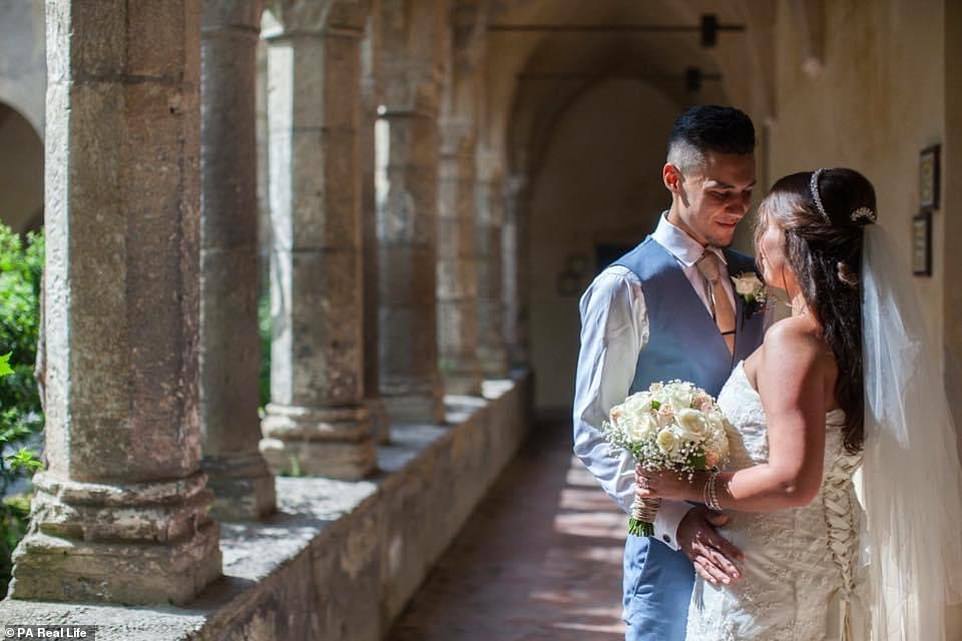 Thariea, pictured with River on their wedding day in Italy, explained that they were sick of working nine to five, while missing out on spending time with their children.

‘We decided we were just sick of every day nine to five work and missing out on time with the children. Every day just rolled into one.’

Despite having no experience of DIY, the couple took the plunge.

She continued: ‘We’ve always thought you should try and follow your dreams and not have regrets. Our view is just to give it a go.

‘We heard a saying once, “You only get 16 summers with your kids”. We wanted to have more time with them and a more spontaneous life than a house and a couple of weeks holiday each year would give us.

‘My dad was in the Forces, so travel is a bit in my blood.

‘I’ve been to Egypt, Antigua, Spain and France and other places. River has been to Nairobi and Antigua, we went together to Bulgaria, and we got married in Italy. It was after we’d had the two older children and they want to go back there in the bus. 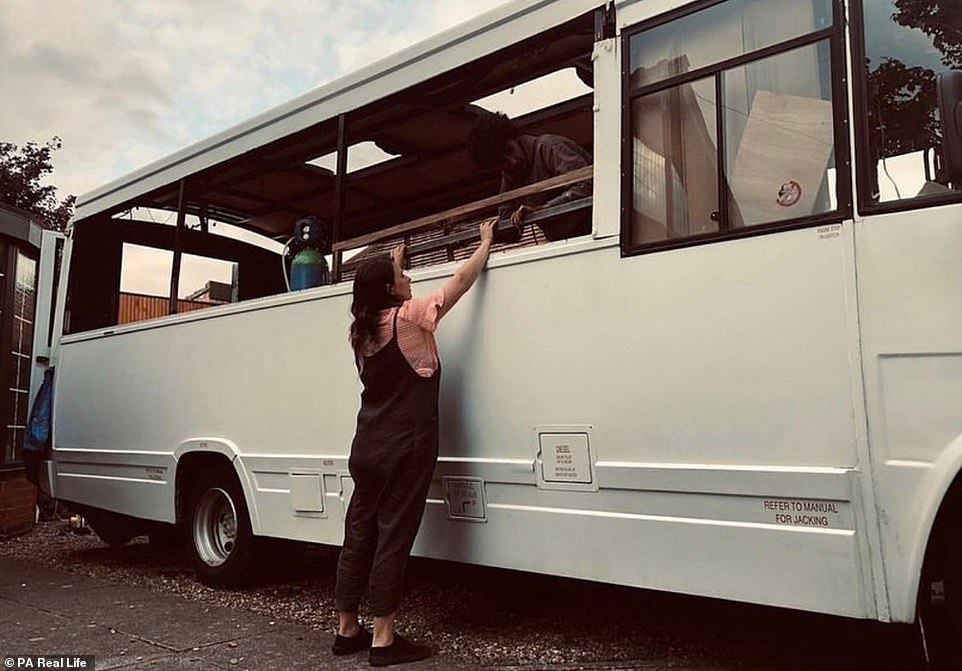 Thariea (pictured) said she and River have both visited various countries and her dad was in the Forces, therefore travel is in her ‘blood’ 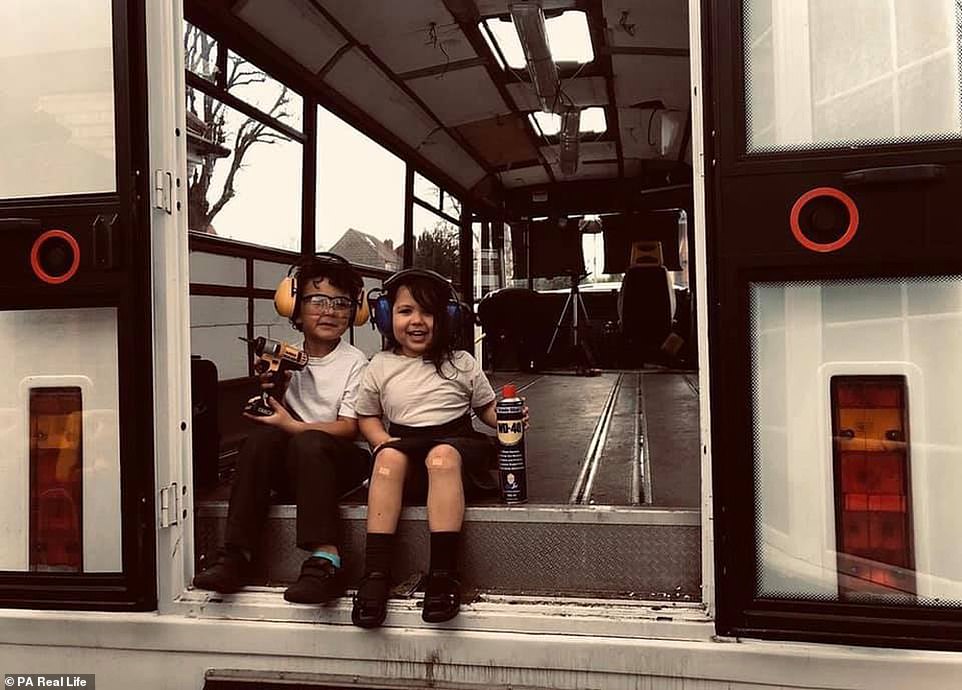 The couple moved out of their rented property and sold all of their belongings within six weeks of purchasing the former Bournemouth council bus. Pictured: Roman, eight, Arabella, six, helping with the bus revamp

‘The bus we found was a former Bournemouth council bus that had been used for disabled and elderly people and had low mileage, so we thought we’d have it and collected it from a private owner in Dartford, Kent.

‘Within six weeks, we had quit our rented property and sold everything in it and all our belongings apart from our clothes and sentimental items, and moved the bus on to the front drive at River’s parents’ where we stayed while we worked on it.’

The mother-of-three revealed their transformation of the bus has been a family effort, saying: ‘We did the conversion a little more slowly than we would otherwise have done.

‘Four years ago, River didn’t know how to hold a drill. He used to ring his dad to ask him how to put up a picture at our old home!

‘But he’s done so much research on this, as he is a perfectionist and wants everything just right. 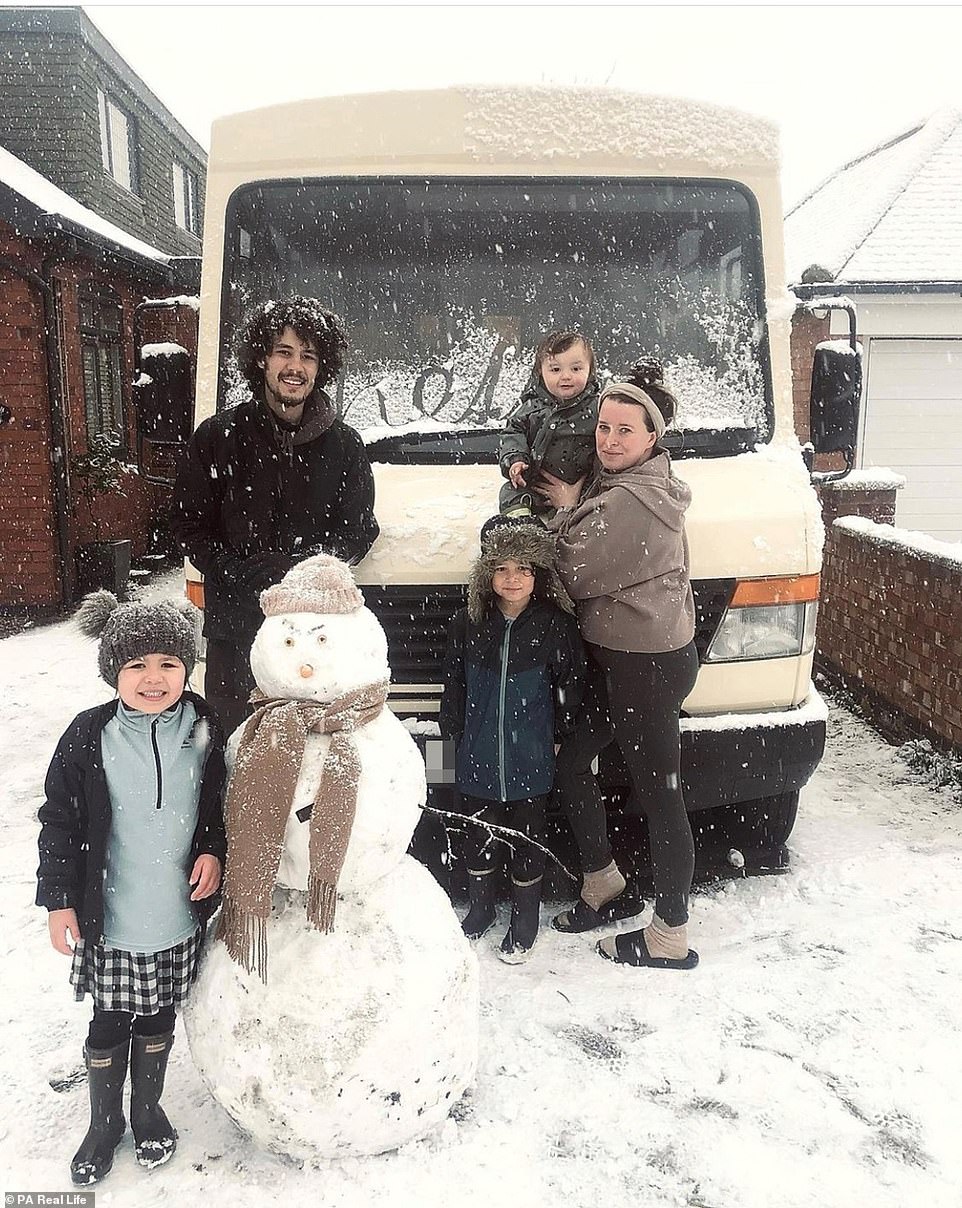 Thariea said she used Pinterest to get inspiration for the interior, meanwhile River researched the DIY skills needed to turn the bus into a home. Pictured: The family with their bus during winter

‘I’ve trawled Pinterest to get ideas to make the interior just how I want it. It’s great now to think, ‘”ow, this is our house”. We’re so calm in the bus.

‘It doesn’t make any difference to us that it may be a bit small – our blood, sweat, tears and soul has gone into building it.

‘Even the children have joined in. Roman helped measure, mark out and push insulation into cavities on the bus. They’ve all had a go at painting and sanding.’

One of the couple’s first jobs was ripping out the old bus seats and chopping off the 3.5m roof to make it higher.

Investing £13,000 in the refit, which they did in evenings and at weekends, as well as fitting solar panels, so they can produce their own power, they have spent £4,000 on the electrical system, bought a fridge, sink, cooker and heater, upholstery, and lots of materials including birch plywood – even though everything has been made bespoke by River. 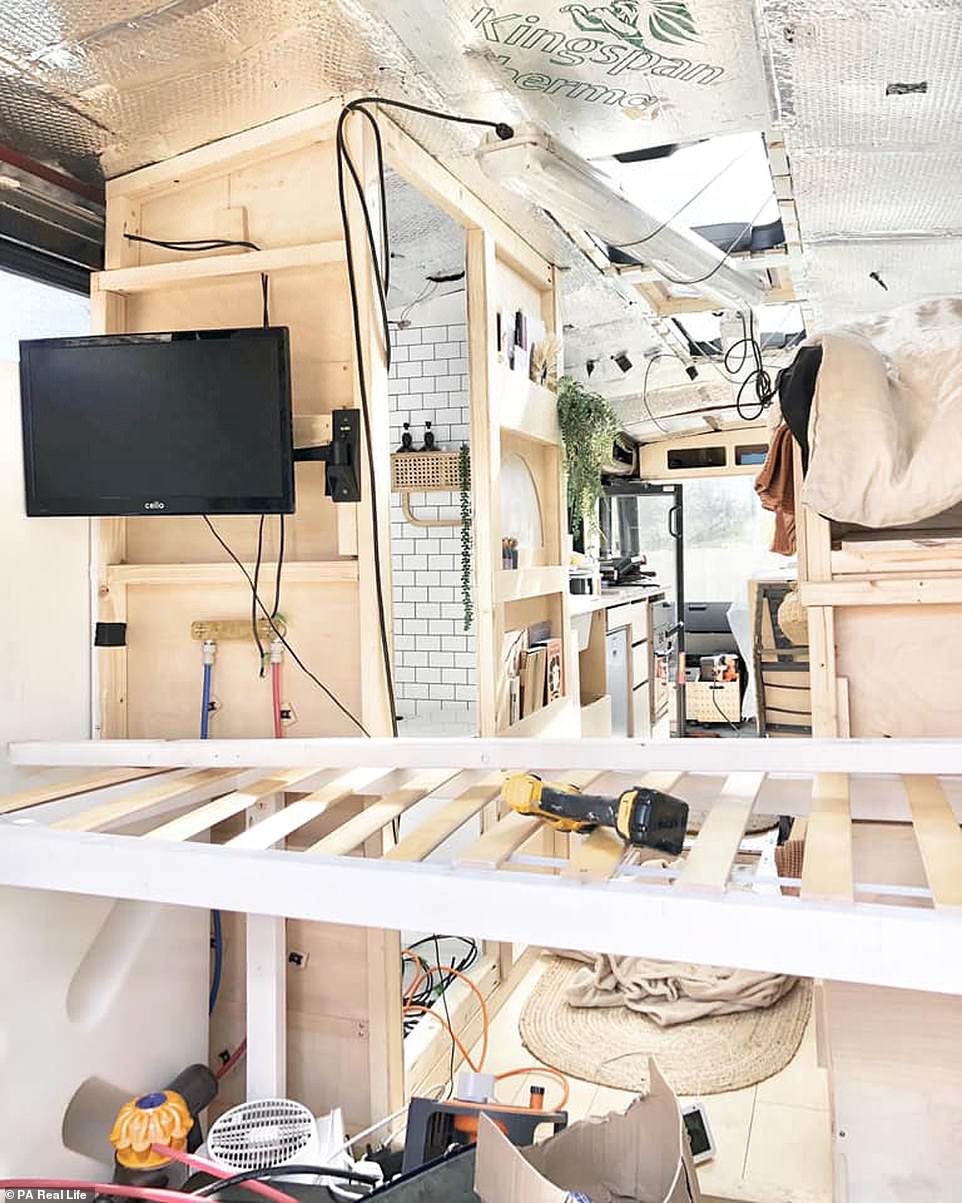 The family spent £13,000 on renovations including solar panels, a £4,000 electrical system, fridge, sink, cooker, heater and upholstery. Pictured: The Paige family bus in the middle of its revamp 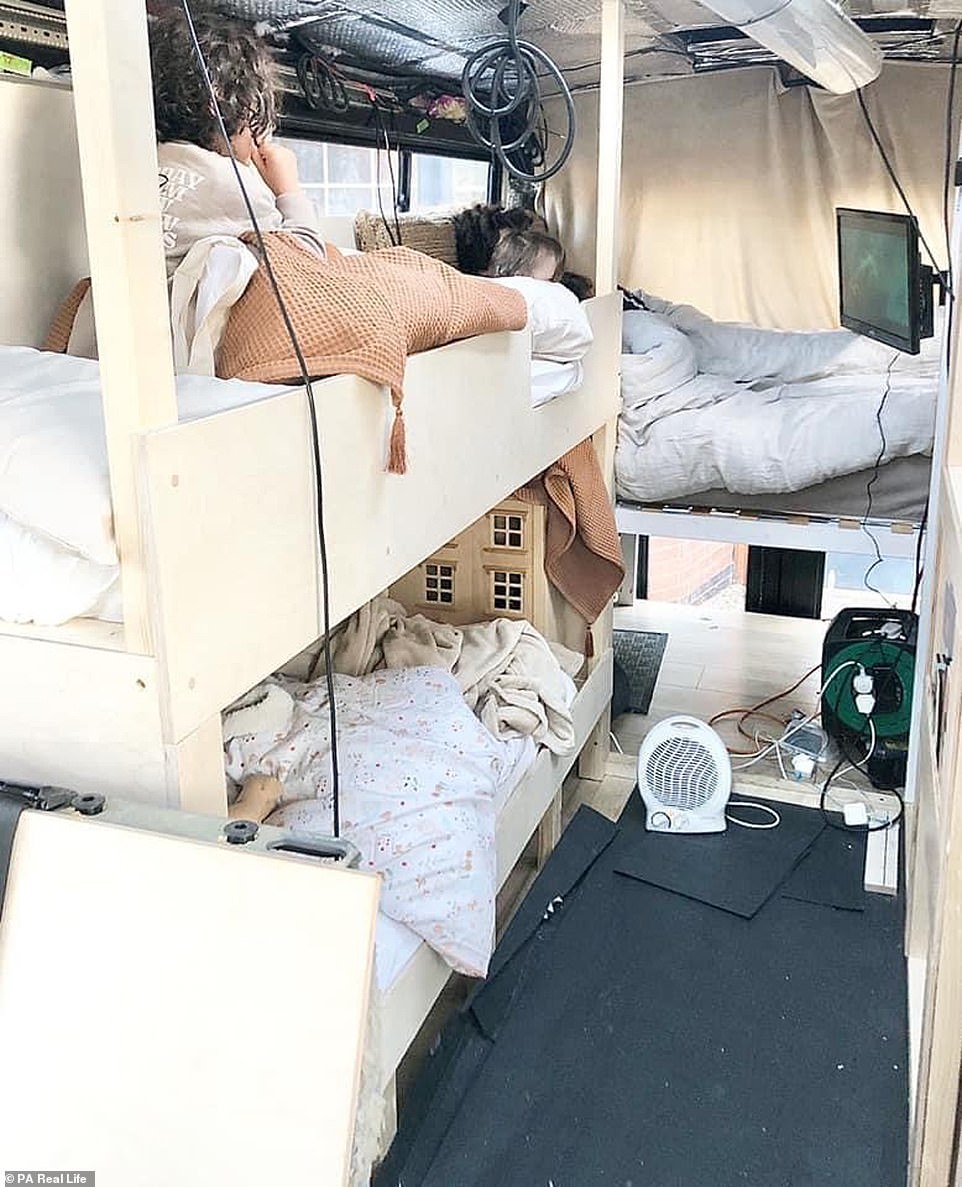 The kids, pictured watching TV in their custom-made bunk beds, love living in the bus even though it’s still only 80 per cent finished 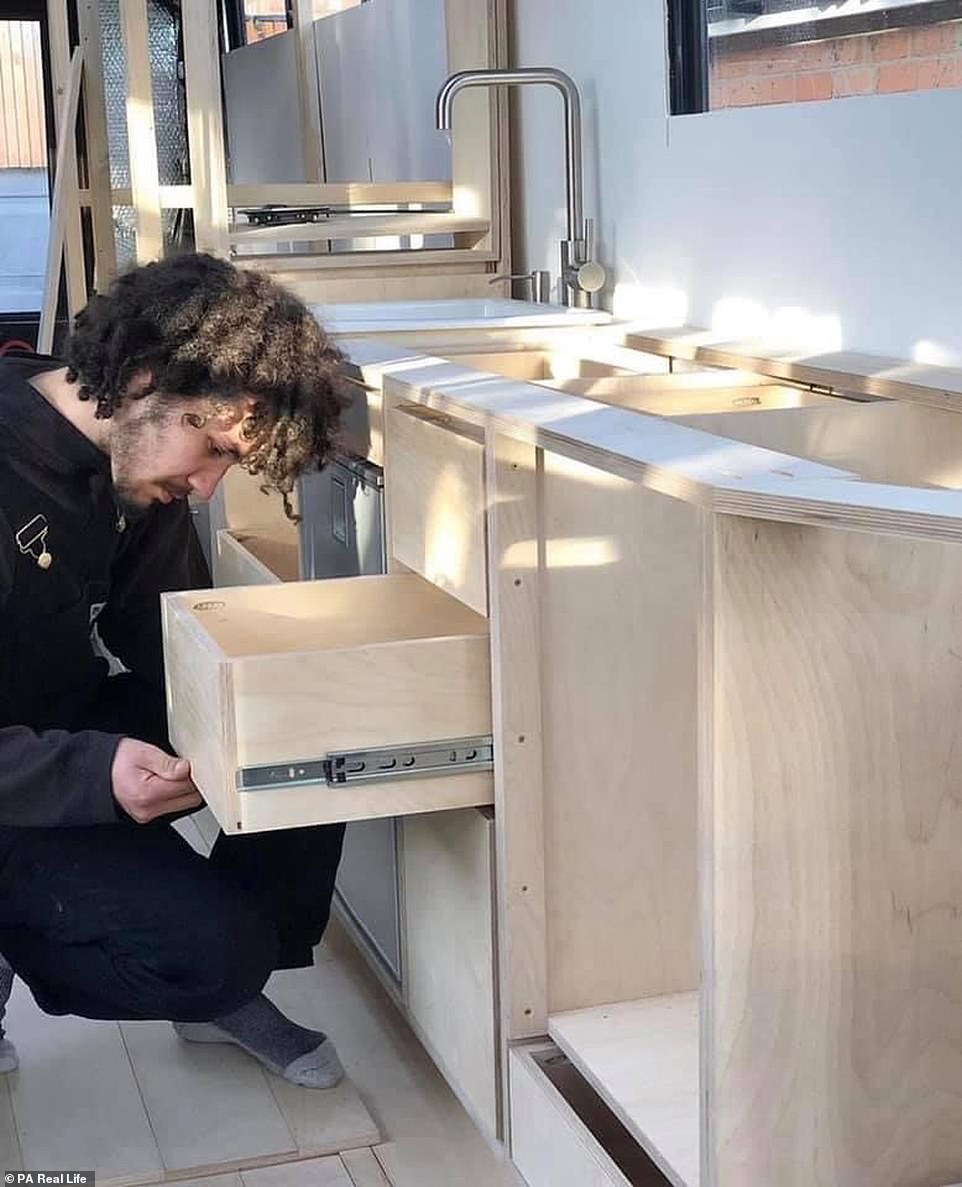 Thariea revealed they’re hoping to move on to a farm until they’re able to start travelling abroad. Pictured: River working on the refit

River sorted the electrics, plumbing and most of the re-fit, while Thariea helped out with grinding, stripping, and interior painting – and they have not used a single tradesperson.

Thariea said: ‘We have always been adventurous and loved travelling and the outdoors, and I think we are moving in the right direction of a more outdoorsy life amongst nature. Plus, the kids will be safer to run around outside.

‘We’re now looking for a farm to move on to until we actually start travelling.

‘When we leave the driveway, it will give River’s parents their space back and we can be a family again on our own, although they have been brilliant.’

The couple joined lots of travel forums to learn how best to adapt before launching their life on the road, but haven’t created a fixed plan beyond the next few months. 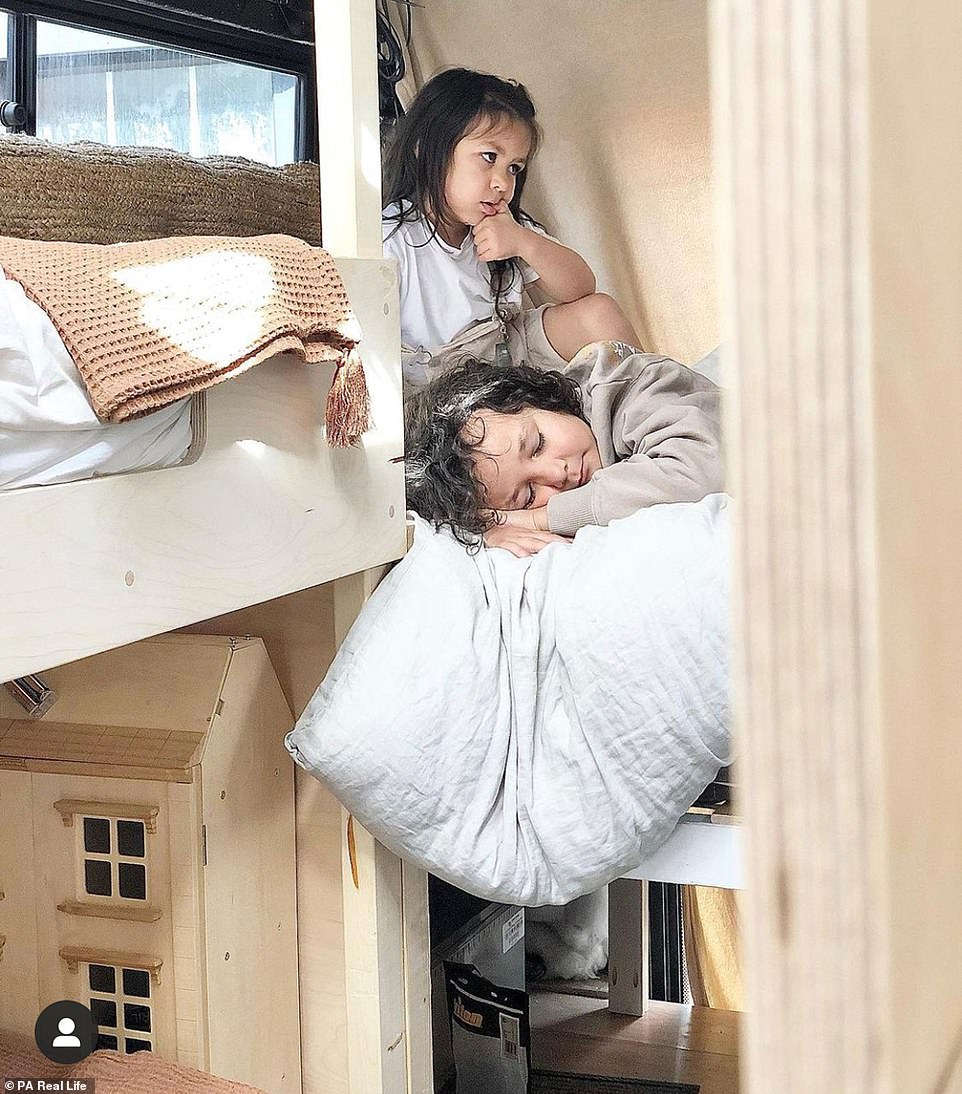 The couple’s children Roman, eight, and Arabella, six, will be home-schooled during the family travels, and although they will be away from their friends, they have arranged to send postcards and do FaceTime catch-ups 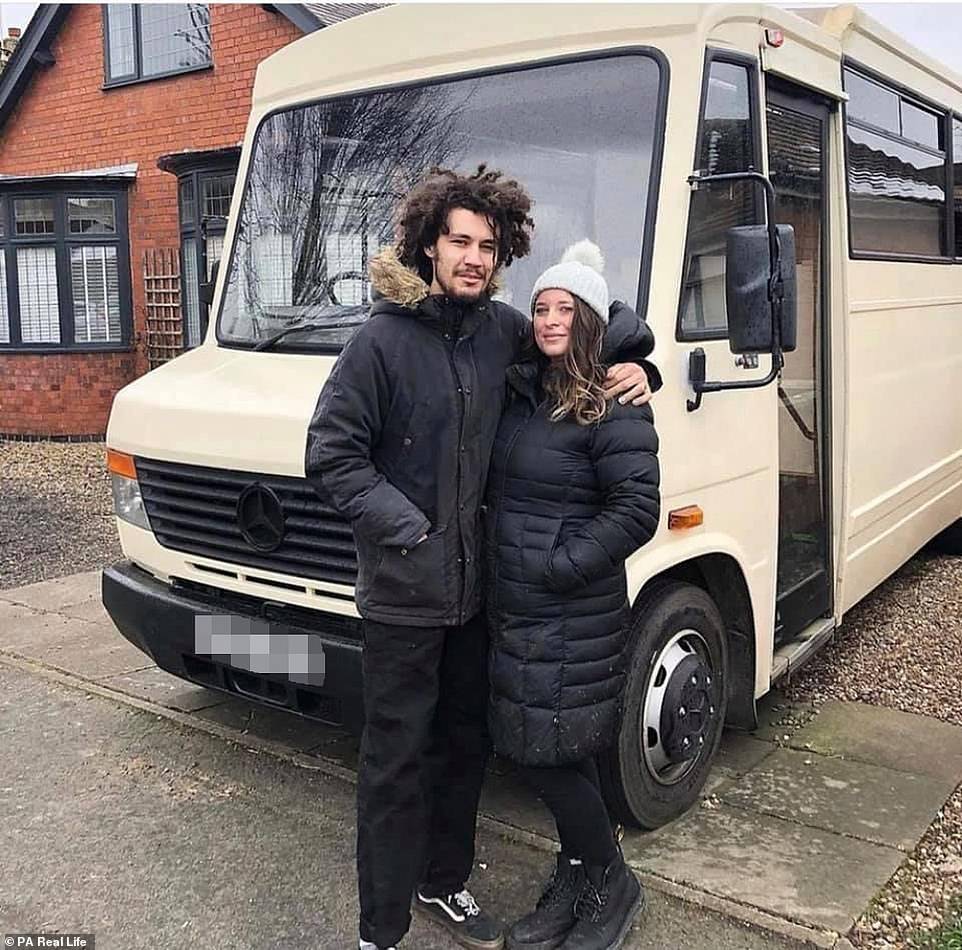 Thariea said they plan to go with the flow and stay on the road indefinitely if they find a place that they love. Pictured: Thariea and River in front of their new bus home 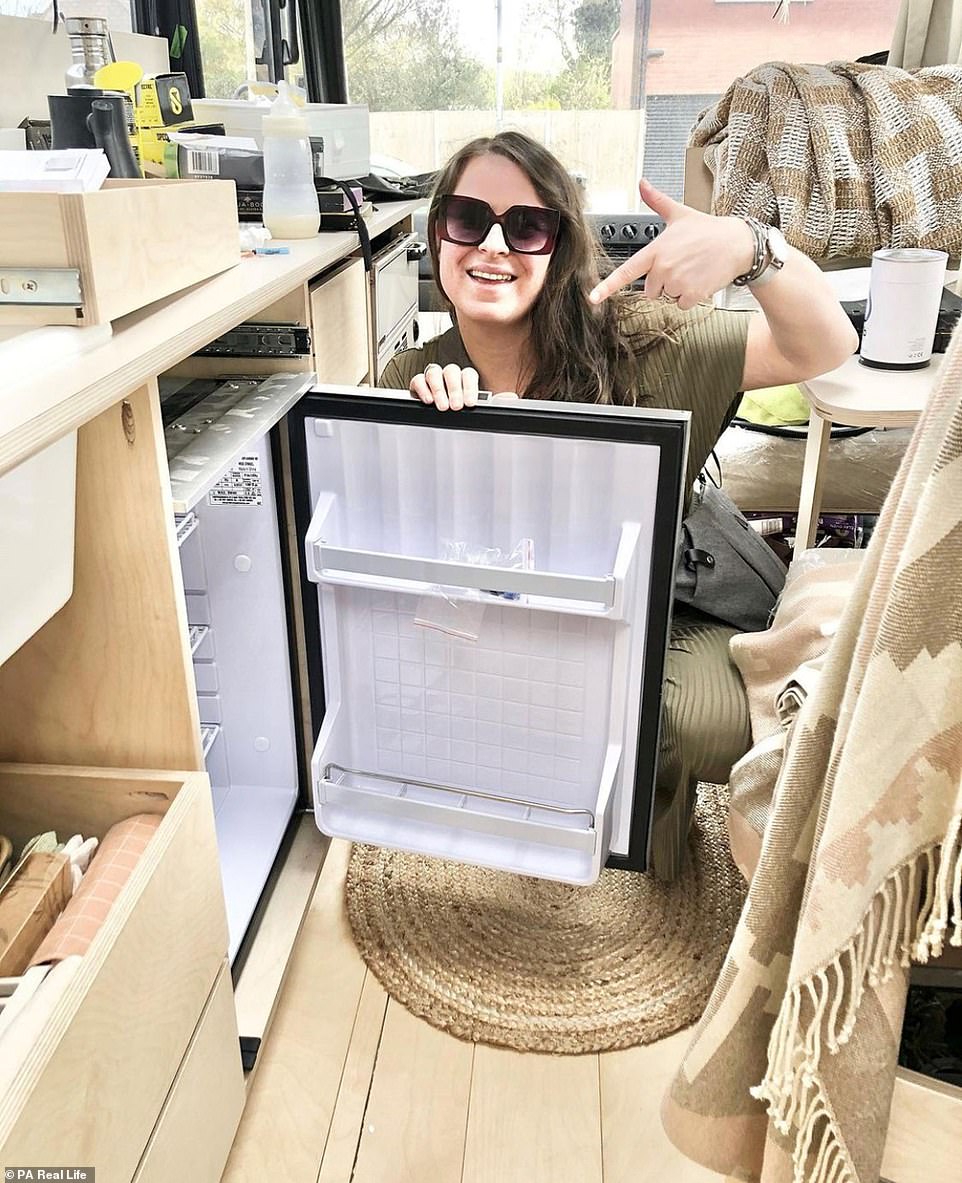 Thariea explained that they plan to take a ferry to France to start their adventure, then head to Portugal and Africa. Pictured: Thariea celebrating the fridge going in

Thariea said: ‘We’re quite easy-going and will go with the flow. We don’t want to rush and if we love one place we’ll stay.

‘To start with, we’ll take the ferry to France and then head to Portugal, before aiming to get to Africa starting in Morocco.

‘The bus should be finished how we want it in another month, but until Covid restrictions allow us to go, we are looking for the farm to move on to, just so the kids gets to experience outside life and we’re out of River’s parents’ way.’

The couple admit it took their parents seeing how serious they are about living the nomadic lifestyle for them to get as excited as their children are for the adventure. 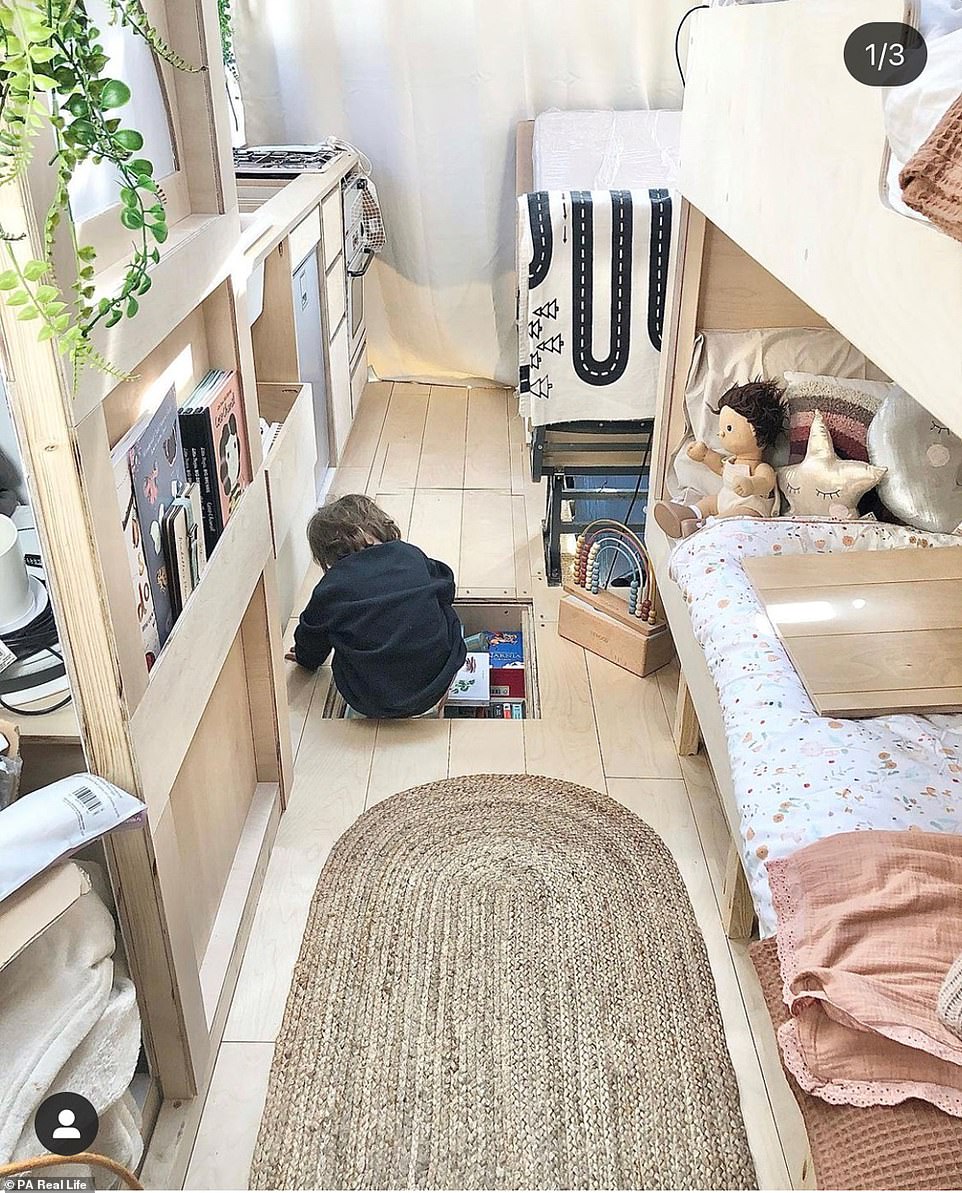 Thariea said they originally thought of travelling for a year but are open to extending the period. Pictured: Inside the bus as it nears completion 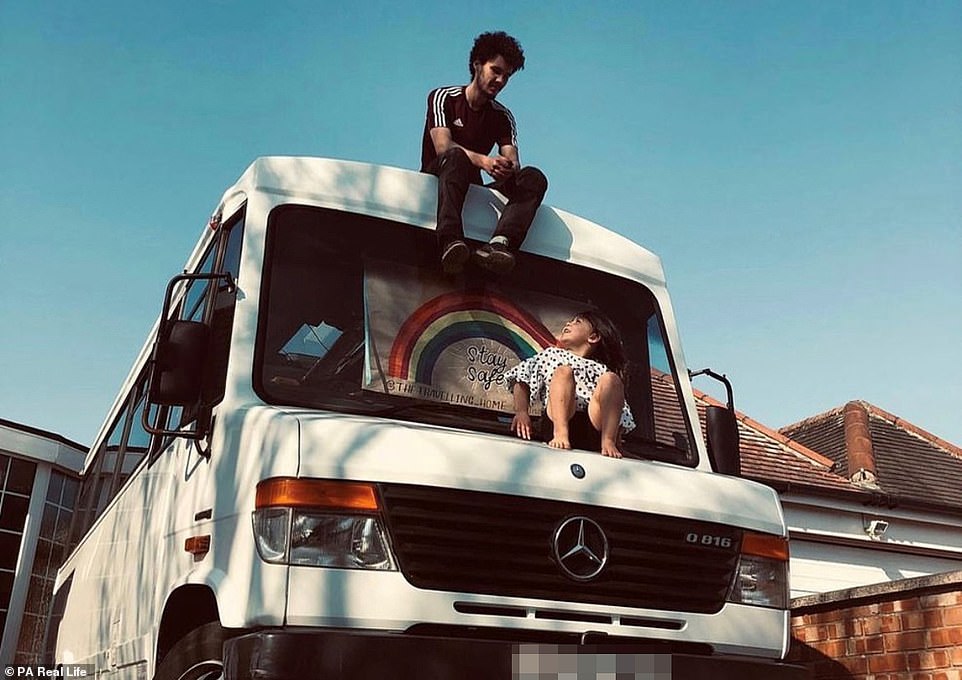 Thariea said the children will be home-schooled throughout their travels and able to FaceTime their friends. Pictured: River taking a break from the refit with Roman

Thariea said: ‘We were keen for the kids to go back to school for a bit when they were allowed to again recently, because they had missed so much of their education and had missed their friends.

‘We will be home-schooling them while we travel and, although they will be away from their friends, they have arranged to send postcards and do FaceTime catch-ups.’

And the couple will be teaching their children about the sites they see as they travel.

She continued: ‘We may well go to Greece and Rome. Roman has been studying the Romans and Greek mythology at school, so he will be able to experience it rather than just seeing it in a book.

‘They will actually learn to write letters, which children don’t do any more – although I’m not sure what they’ll put on the address apart from ‘Our bus, somewhere in the world’.’