Humpback whales are being sighted in giant pods of a scale never recorded before off the Australia coast as conservation measures help restore numbers thought to be approaching those of pre-whaling days.

The mammals have also been filmed using bubbles to stun or corral their prey such as krill, the first time such behaviour has been documented in Australian coastal waters. 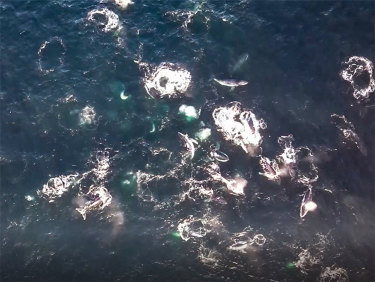 ‘We were blown away’: Macquarie University’s Rob Harcourt was among those to encounter one of the humpback super-groups off the NSW South Coast last year.Credit:Brett Dixon

During September and October last year, scientists, whale-watching operators and recreational drone pilots captured six observations of the so-called super-groups of humpbacks off the NSW and Tasmanian coasts, according to research published this week in the Aquatic Conservation journal

Those pods ranged from 20 to 90 whales, and had previously only been documented in the southern hemisphere off South Africa. 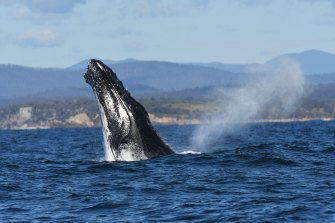 One of the humpback whales in a large pod off Cuttagee Beach near Bermagui on the NSW South Coast.Credit:Rob Harcourt

Areas off the south coast of NSW and eastern Australia were “pretty much hot spots” for humpback whales, particularly for those on their southward migration in the spring, Dr Pirotta said.

Typical sightings of migrating humpbacks are one or two animals, and so to be amid the super pods off the South Coast was remarkable, said Robert Harcourt, a professor of marine ecology at Macquarie University and another of the paper’s authors.

“We were blown away by the numbers of whales out there feeding,” he said. “We saw large aggregations of whales over several days.” 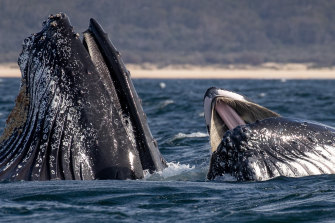 Humpback whales surfacing off Merimbula, on the NSW South Coast. Humpbacks have baleen, a type of filter instead of teeth that allows them to capture krill and other small fish.Credit:W. Reynolds

The paper said it remained unclear whether the formation of super-groups was linked to changes in the type or density of prey available, either along the migratory route or in the feeding grounds of the previous summer. “It is also possible that the increased population size following recovery make large group sizes while feeding more common,” the researchers said.

While the super-groups might attract the public, Professor Harcourt warned would-be whale watchers in boats to steer clear. “You wouldn’t want to go into one if you didn’t know what you were doing,” he said. “You could easily get flipped.” 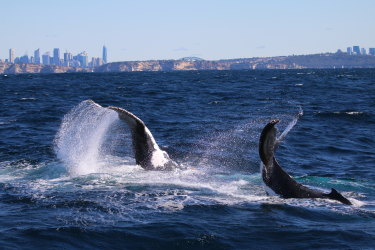 Humpbacks off Sydney in July 2020: numbers of the giant mammal are growing rapidly and are believed to be approaching pre-whaling days.Credit:Vanessa Pirotta

Boats are required to stay at least 100 metres away from whales and 50 metres from dolphins. No more than three boats are permitted within so-called caution zones of 300 metres of a whale at any one time, according to Australian guidelines.

Humpback whales had recovered much faster than other species, including blue whales, which had been detected forming large groups off the California coast, Professor Harcourt said.

Sperm whales, for instance, had not shown signs of any increase, post-whaling times, he said.

One possible consequence of the congregation of so many humpbacks in one area is that their known sociability and intelligence are being put to co-operative use. 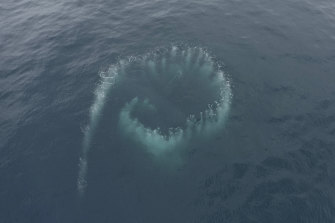 Humpback whales create so-called bubble nets to corral their prey. This image was taken off Tasmania in 2020.Credit:Wild Ocean Tasmania

“The prey species targeted during these events remains unknown; however, observations from reliable observers suggest that both schooling fishes and krill were targeted by the whales,” the paper found.

Dr Pirotta said humpbacks are the only whales known to work together in such a way.

“The possible cultural transmission of behaviours may also indicate links and the potential presence of individuals from other southern hemisphere populations, highlighting the need for appropriate widespread population protections,” the paper concluded.