Better than the real thing: Scientists create synthetic red blood cells that not only carry oxygen around the body but also administer drugs and detect dangerous toxins

Scientists have created synthetic red blood cells that can perform all the functions of the real thing and more.

Tests in mice and chick embryos showed that the artificial cells were able to carry oxygen and squeeze through capillaries just like the biological versions.

The functions give them a broad range of medical applications, scientists said, which could pave the way for improvements in treating diseases such as cancer. 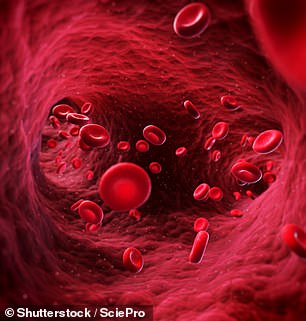 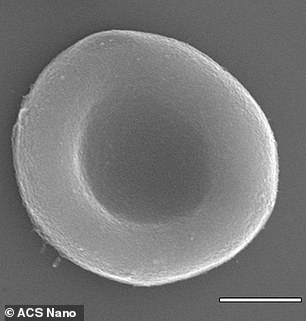 Scientists made the artificial cells by covering donated red blood cells with a thin layer of silica, and then a layer of polymers with positive and negative charges.

The silica was then carefully etched away and coated in natural red blood cell membranes.

The study, published in the American Chemical Society’s journal Nano, said they found these unique ‘cells’ retained the biconcave shape of the biological version.

They were then loaded with either haemoglobin to enable them to carry oxygen, ATP biosensors for detecting toxicity, an anticancer drug or magnetic nanoparticles.

The results showed that these loads enabled them to carry out the normal tasks of a red blood cell, using haemoglobin, or additional tasks.

The ‘cells’ also circulated within mice for 48 hours. This high time was achieved as they were camouflaged against white blood cells by proteins on their surface.

Without the defence, the artificial cells would have been gobbled up.

ATP biosensors were used to detect toxicity as concentrations of the enzyme, which carries energy, fluctuate depending on the amount of toxins, making it a valuable indicator. 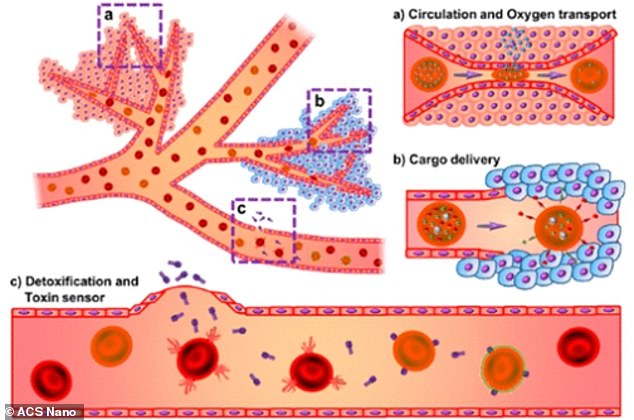 This diagram shows the artificial cells, coloured yellow, in action while circulating in the blood stream. They offer hope for treating diseases such as cancer

The research was carried out at the University of New Mexico, Sandia National Laboratories and the South China University of Technology.

It is a major development in the field, as previous studies have failed to mimic every function of a biological red blood cell.

Future studies are planned that will explore their potential in medical applications, such as cancer therapy and toxin biosensing.