SARAH VINE: Months of lockdown have left us flirting with disaster

According to a new study, humans are losing the knack of flirting with each other.

An inability to use chat-up lines, humour and eye contact are contributing to the rise in the number of single people, with more and more of us simply incapable of deploying the tactics required to signal attraction.

I must confess I’m a terrible flirt. That is to say, I’m terrible at it. I’ve always found the potential for embarrassment or rejection too off-putting. 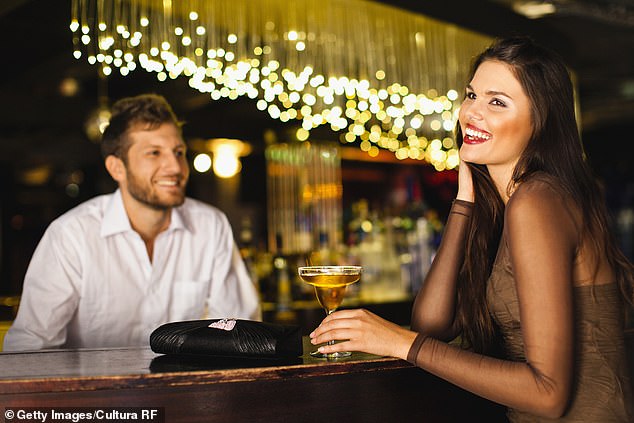 An inability to use chat-up lines, humour and eye contact are contributing to the rise in the number of single people, with more and more of us simply incapable of deploying the tactics required to signal attraction. Picture: Stock

Successful flirting requires a degree of physical self-confidence and I’ve never really had that, not even when I was younger and theoretically less unattractive.

Setting aside my own neuroses, however, I do think there’s more to this than simple insecurity or emotional paralysis. Communication between the sexes has never been more complex, and there are a variety of factors at play.

In recent years, sex and sexual politics have become so inextricably intertwined that it’s hard to know how anyone goes about finding a mate.

In the age of #MeToo there are so many behaviours that, certainly in my day, would have been considered harmlessly flirtatious which are now not only unacceptable but very likely to land a person in serious hot water.

Unless you’re the sort of knucklehead who just doesn’t care, it must seem almost impossible to go about the business of signalling attraction without being fearful of overstepping the mark in some way, however inadvertent.

Who knows these days what might constitute a sexual micro-aggression. A wink, a smile? The offer of an umbrella on a rainy night? The touch on an elbow as you help someone to their cab?

God forbid someone should put their hand on someone else’s knee. You just never can tell where boundaries lie, not least because they always seem to be shifting. 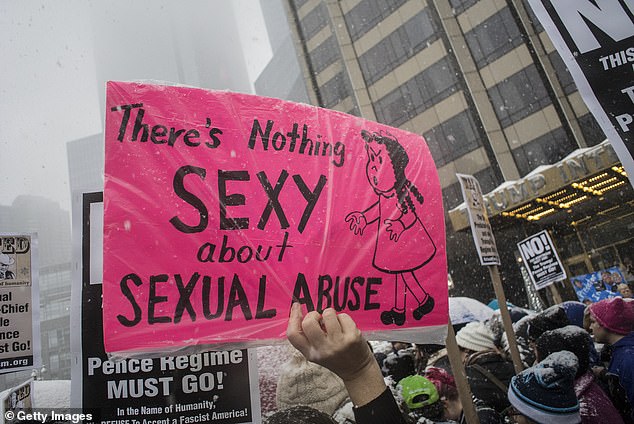 In the age of #MeToo there are so many behaviours that, certainly in my day, would have been considered harmlessly flirtatious which are now not only unacceptable but very likely to land a person in serious hot water. Pictured: #MeToo rally in 2017

But this is one of the problems with flirting: it is, by its nature, a subtle and ambiguous art. In fact, some might argue that the very uncertain, unclear nature of the interaction is part of the joy of it.

There is excitement, danger, in not quite knowing where you stand with the other person. Which, in a world where you practically have to fill in a consent form in triplicate before it’s safe to proceed to first base, makes things rather tricky.

More recently, though, another obstacle has presented itself: lockdown. If communicating the language of love was hard before, it’s nigh on impossible when half your face is hidden behind a mask (on the upside, though, you don’t have to worry about bad breath).

As for Zoom, no one wants to gaze up their beloved’s nostrils as they search for the mute button, especially not when they’re frozen in all their hirsute glory.

Social distancing lends itself more to semaphore than to the art of seduction, and at two metres they are more likely to assume you have something in your eye than catch that subtle wink.

Assuming you do manage to acquire your target, even now might not want to risk sharing a park bench or a hot drink in case the Covid Gestapo catch you (and they really don’t do flirting). 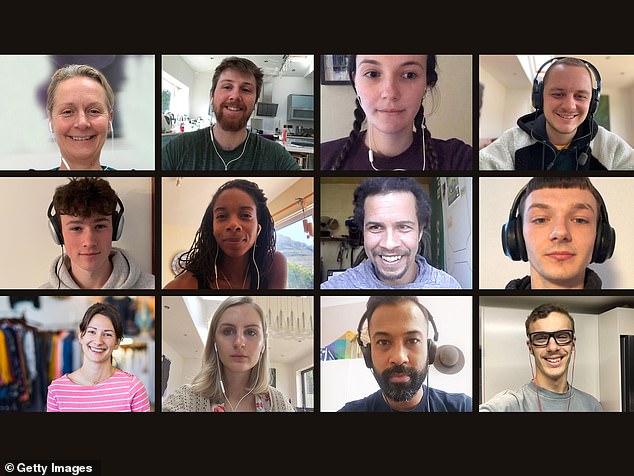 As for Zoom, no one wants to gaze up their beloved’s nostrils as they search for the mute button, especially not when they’re frozen in all their hirsute glory. Picture: Stock

The truth is, the longer we remain physically locked up, the more people are becoming emotionally locked in, and forgetting how to flirt is just a part of it. Humans are social animals who thrive on contact with others. Deprived of that contact, we don’t quite know how to function.

And it’s surprising how quickly it all unravels.

When all this began, I spent my evenings in a flurry of text messages and FaceTime calls. Now, one year on, I find even having a phone conversation with a friend exhausting. It’s almost as if I’ve forgotten how to socialise.

It has been so long since I sat next to a stranger at a dinner party, or had any sort of conversation other than ‘what’s for supper’ or ‘damn, we’ve run out of wine again’, I’m honestly not sure I can remember how.

That’s why we have to lift this lockdown. It’s not just that we all need a haircut, or that the economy needs restarting. It’s that we all need to be able to feel human again. Now, before it’s too late. 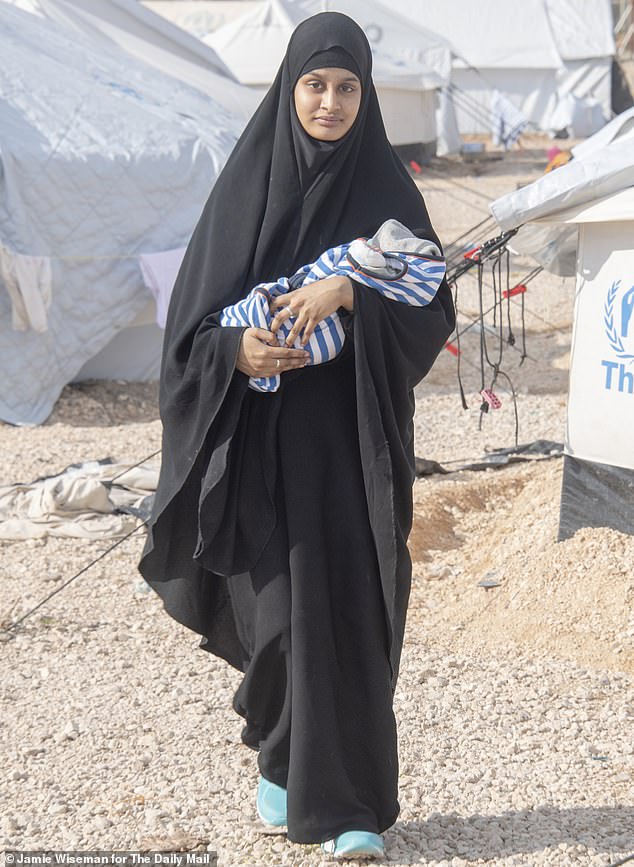 But how do we know that underneath it all she’s not still the same person who, in 2019, showed zero remorse for her actions and even condoned the Ariana Grande concert bombing?

I’m afraid it’s going to take more than a blow-dry and a makeover to convince me.

Unintended consequences of testing schoolchildren: I’ve had to buy my son thermals because he now has to spend so long outside in the freezing rain waiting in line to be swabbed.

I can say with some confidence that he doesn’t have Covid. Pneumonia, on the other hand . . .

I don’t doubt the decision by several EU states — including Italy, where my parents are languishing, locked up and unvaccinated for over a year now — to halt the AstraZeneca vaccine is purely political. They messed up their rollout so, to deflect public anger, they are trashing ours.

The hope, I imagine, is to create such a panic that people start refusing it, then they don’t look so bad.

Once again, it’s proof that all the EU really cares about is self-preservation — and that it will stop at nothing, even the potential deaths of thousands of its citizens, to achieve it.

We’ve become so used to seeing explicit pop videos, hardly anyone bothers to comment any more.

But Megan Thee Stallion and Cardi B’s stage antics at this year’s Grammy Awards do, I think, merit some pause for thought. 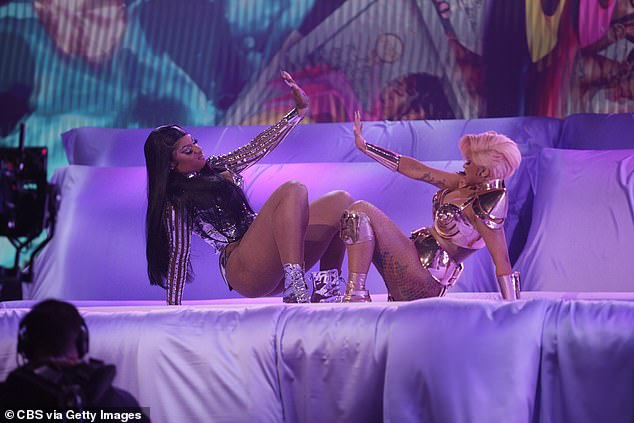 Megan Thee Stallion and Cardi B’s stage antics at this year’s Grammy Awards do, I think, merit some pause for thought

Even by their own already very risque standards, their performance was extremely explicit — uncomfortably so in places, especially for a mainstream audience of millions, many of whom will have been underage.

I understand that they wish to present themselves as sexually liberated, and of course that has always been what pop music is about.

But there is a difference between being a strong, confident woman — Beyonce, for example, who notched up the most awards in the history of the Grammys — and this kind of grubby, and in my humble opinion demeaning, top-shelf behaviour.

Good to see Prince Philip returning home after almost a month in hospital. Yet some people have criticised him for not wearing a mask as he left.

The man is 99, for heaven’s sake. He’s been vaccinated and he’s just had a heart operation. If that doesn’t qualify him for a medical exemption, I don’t know what does.

DON’T PAINT ME AS RACIST

Having accused the royals of racism towards his wife in last week’s Oprah interview, apparently Prince Harry spoke subsequently to his brother and his father but, according to the Sussex camp, the talks were ‘not productive’ because they failed to ‘acknowledge the problem’.

In other words, Charles and William refuted the claim. And quite right too. Why should they be forced to admit to something they say isn’t true? 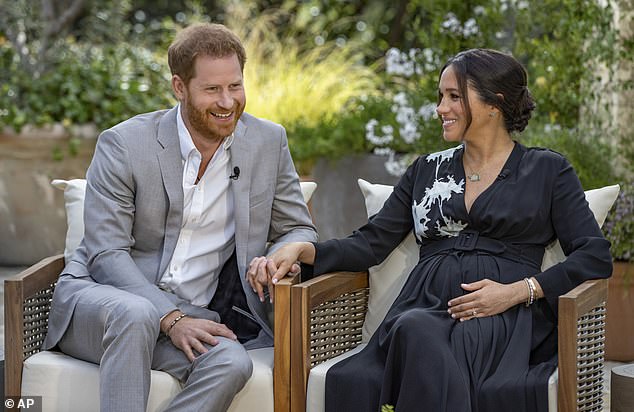 Having accused the royals of racism towards his wife in last week’s Oprah interview, apparently Prince Harry spoke subsequently to his brother and his father

On a much more minor note, last week American Vogue jumped on this particular bandwagon by accusing me of using a ‘racist’ term — ‘niggling’ — in an article I wrote about Harry and Meghan’s engagement pictures back in 2017.

But, as has been explained several times and at great length in this newspaper — and also in a letter to the editor-in-chief of Vogue, Anna Wintour — the word in question, ‘niggling’, is a) not racist and b) was not in the actual article but in the headline, which I did not write or have any part in writing.

And yet they persist. On Saturday, in response to the Daily Mail’s complaint about the accusation — which as far as I’m concerned amounts to libel — they simply repeated the lie, saying ‘our editors concluded that Sarah Vine’s word choice was indeed surprising’. I think this is what is known as ‘confirmation bias’.

But just because we want something to be true doesn’t always mean it is. And repeating a lie doesn’t make it true. It just makes you an even bigger, nastier liar.