Off to a flying start! Glamorous virtual racegoers including Charlotte Hawkins dress up to mark Royal Ascot Ladies’ Day from home as the meet continues behind closed doors (but at least they avoided the rain)

They might not be able to attend in person, but that hasn’t stopped Royal Ascot fans from pulling out all the fashion stops to recreate the glamour of Ladies’ Day from the comfort of their own homes.

The third day of the five-day meet usually sees the most eye-catching and elegant fashion on show as thousands of style-savvy revellers descend on the Berkshire racecourse.

But the current coroanavirus crisis means the action is taking place behind closed doors for the first time in 100 years, with even the Queen, a racing enthusiast and firm fixture at Royal Ascot, staying away to watch on TV from Windsor Castle.

However the circumstances haven’t stopped ‘virtual racegoers’ from flaunting their finest raceday ensembles on social media – using the hashtags #StyledWithThanks and #hatsfromhome.

Today looks set to be the most fabulous yet, with TV presenter Charlotte Hawkins among the first to share her look on social media. As usual, dresses and fancy fascinators are the order of the day for many – although at least this year they don’t have to worry about their outfits being ruined in the rain. 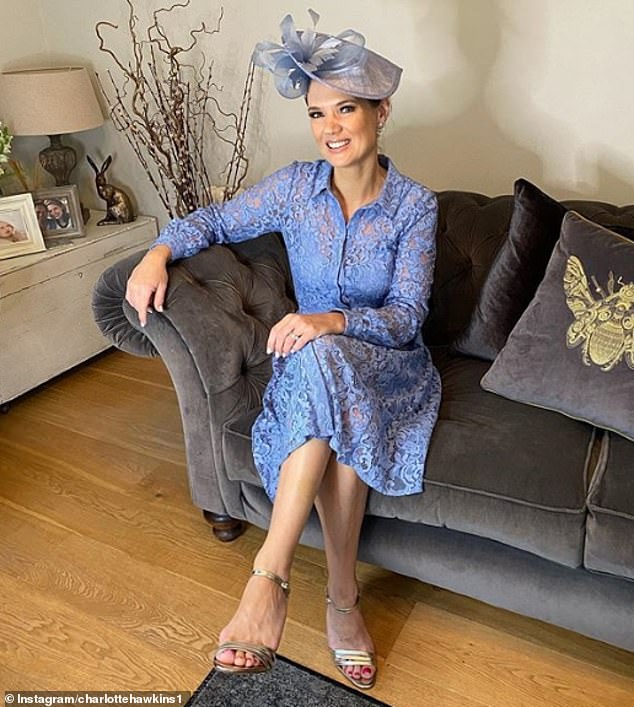 True blue: TV presenter Charlotte Hawkins was among the first to share her Royal Ascot race day look on social media, pictured. In a photo shared on Instagram she joked the stunning indigo lace dress and matching fascinator is ‘standard’ work from home attire

Monochrome magic: Dresses and fancy fascinators are the order of the day for many  – although at least this year they don’t have to worry about their outfits being ruined in the rain 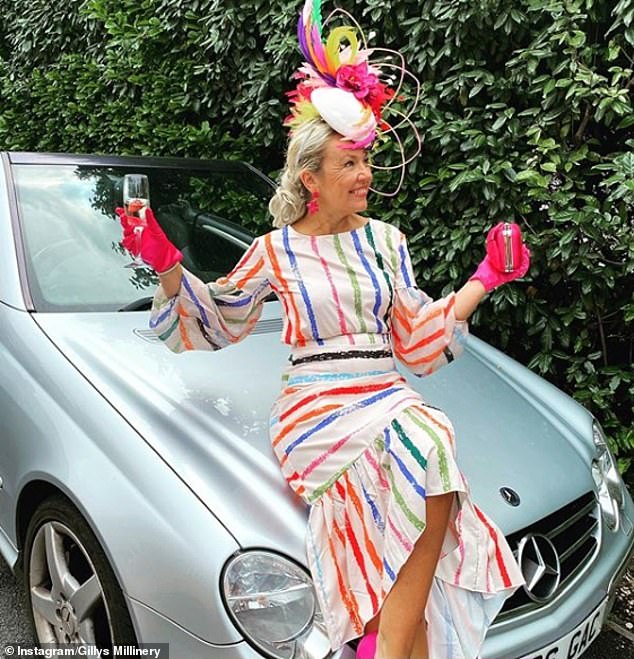 Splash of colour! The style maven behind Gillys Millinery brightened up the morning in a striped dress with hot pink accessories. She joked in the caption: ‘Nothing to see here!’ 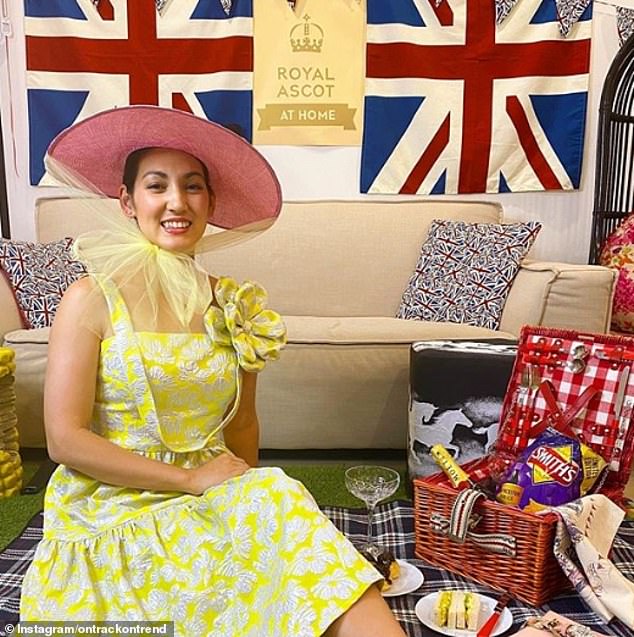 All participants are being encouraged to donate £5 to the campaign fundraising page in a bid to help spread the #StyledWithThanks message in recognition of those working on the frontline of the global Covid-19 crisis.

They are being encouraged by race organisers to donate to four front-line charities – The National Emergencies Trust Relief Fund, NHS Charities Together, The Care Workers Charity and the Berkshire Community Foundation Coronavirus Fund.

Yesterday the Queen had plenty of reason to celebrate after one of her horses, Tactical, claimed victory in the Windsor Castle Stakes, although she is sure to have felt a tinge of disappointment that she could not watch the victory in person.

Trainer Andrew Balding said: ‘It’s obviously a great thrill for all of us to have a royal winner at the Royal meeting.

‘On race days we tend to give the Queen a ring in the morning and give her our thoughts. We did that this morning, so she was well informed.’

The win will have been the icing on the cake as the Queen followed proceedings closely from home, her bloodstock adviser John Warren said. 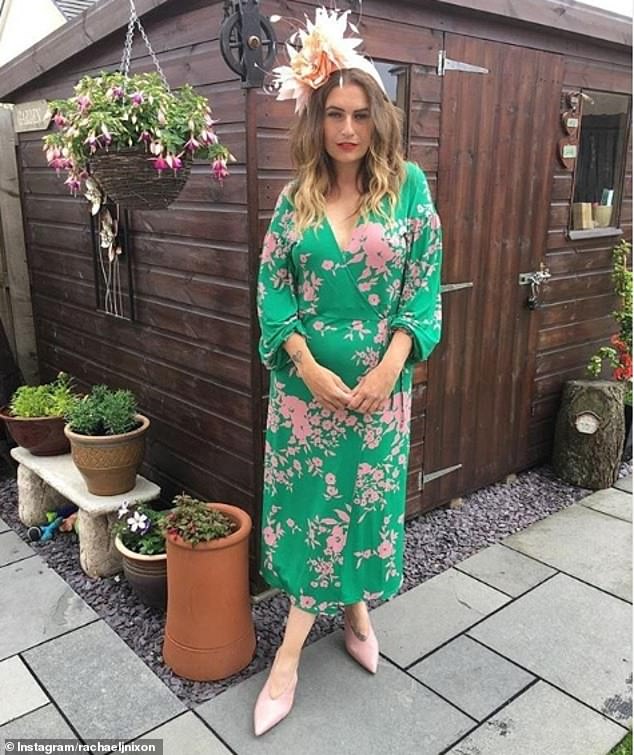 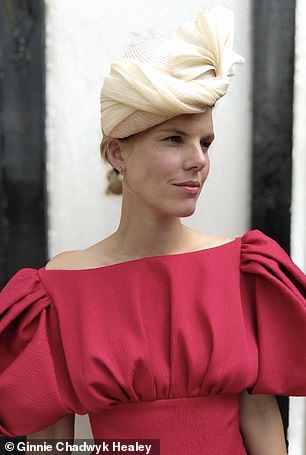 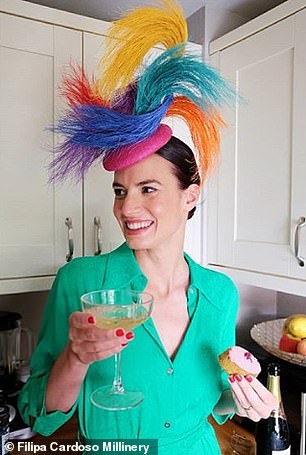 Hat’s off to them! Presenter Ginnie Chadwyk Healey wears Camilla rose millinery and an Emilia Wickstead dress (left) and the creator of Filipa Cardoso Millinery in one of her designs (right) 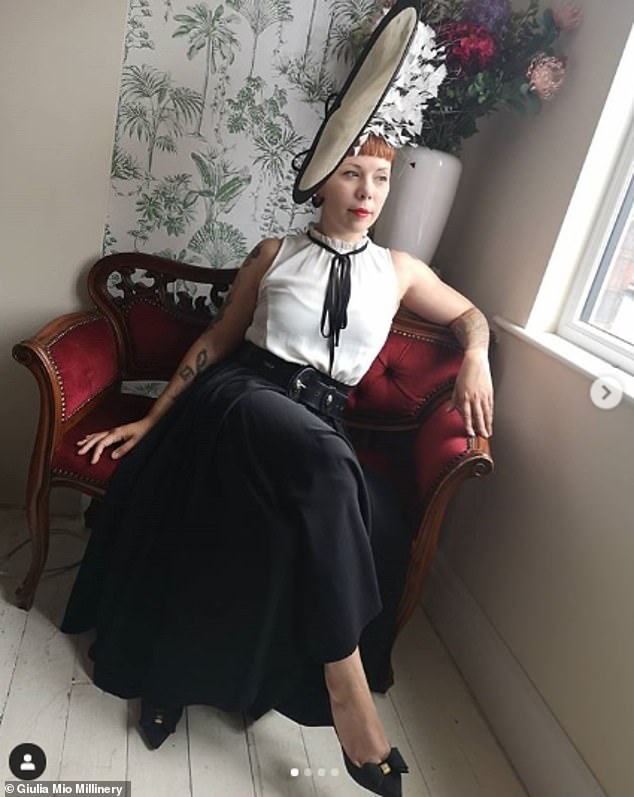 Classic combination: The creator of Giulia Mio Millinery, based in Leicester, strikes a pose 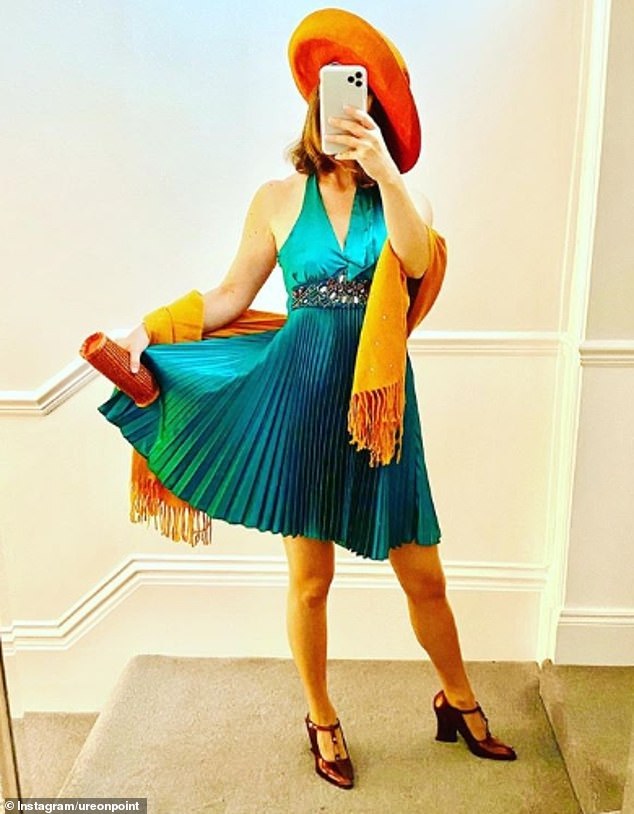 Bright and beautiful! Social media user Olivera put together a colourful ensemble for the event

He said: ‘Throughout the conversations the Queen was saying how delighted she is to produce a two-year-old winner at Royal Ascot.’

Mr Warren described the monarch as ‘very pragmatic’ and someone who ‘doesn’t get frustrated lightly’ but said there will most likely have been some disappointment on her part at not being present for the win.

It is the first time in her 68-year reign that the Queen has not attended the event in person.

He said: ‘It is obviously a great shame Her Majesty isn’t there to enjoy the buzz of having a runner, but she has studied every bit of it today, watching the races. It’s the icing on the cake to have a winner for her.

‘I think the Queen, every day of her life, follows racing one way or another when she can. She will have read the Racing Post and known very well the important, fancied horses. She always dedicates half an hour or so to the information every day, so she’s very well tuned in and racing is her tremendous pleasure.

‘The Queen doesn’t get frustrated lightly – she’s very pragmatic and takes everything in her stride. I suspect deep down there may have been a tinge of disappointment she wasn’t there, but that was completely overridden by having a winner and breeding it.

‘I suspect she got a warm inner feeling from pulling this one off.’