Time for a change. Following his recent arrest, Jersey Shore star Ronnie Ortiz-Magro is taking a step back from the world of reality TV.

“After talking to the team at MTV, we have mutually agreed that I will step away from the show while I seek medical treatment for mental health issues that I’ve ignored for too long,” the 35-year-old Bronx native wrote in an Instagram Story on Thursday, May 13. “My [No. 1] goal now is facing my struggles head on.”

Hours earlier, the reality star’s attorneys, Scott E. Leemon and Leonard Levine, told Us Weekly their client is “currently seeking medical treatment for psychological issues that he has ignored for a long time.”

While the Celebrity Fear Factor alum noted on Thursday that the “process will be difficult,” he’s ready to finally heal. “My [No. 1] priority is to get healthy and be the best man and the best father I can [be] for my daughter,” his Instagram Story continued. 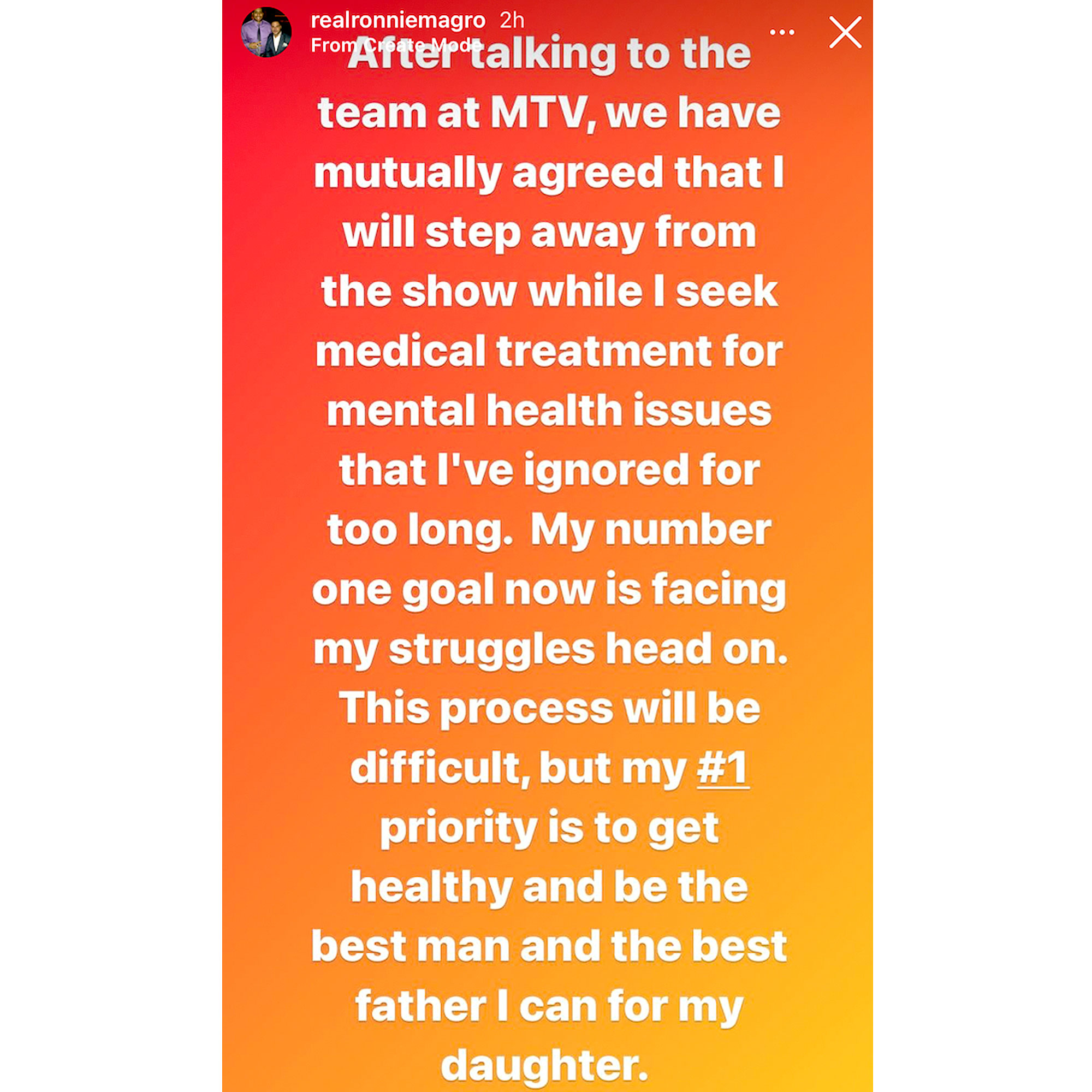 In April, Ortiz-Magro was arrested and released on $100,000 bond in Los Angeles. At the time, a source revealed, “His 3-year-old daughter, [Ariana], was with him as it was his turn to watch her this week, but she is in safe hands now.”

According to the insider, the incident did not involve Ariana’s mom, Jen Harley, from whom the Famously Single alum split in 2019. The Los Angeles Police Department later confirmed to Us that Ortiz-Magro’s booking fell under “intimate partner violence with injury with priors,” referring to his previous arrests.

Ronnie Ortiz-Magro’s Ups and Downs Through the Years

Harley, 33, retrieved Ariana from Los Angeles soon after her ex’s arrest, returning to her home in Las Vegas with the little one in her arms. “Last time I’m ever making this drive,” she wrote in an Instagram Story last month. 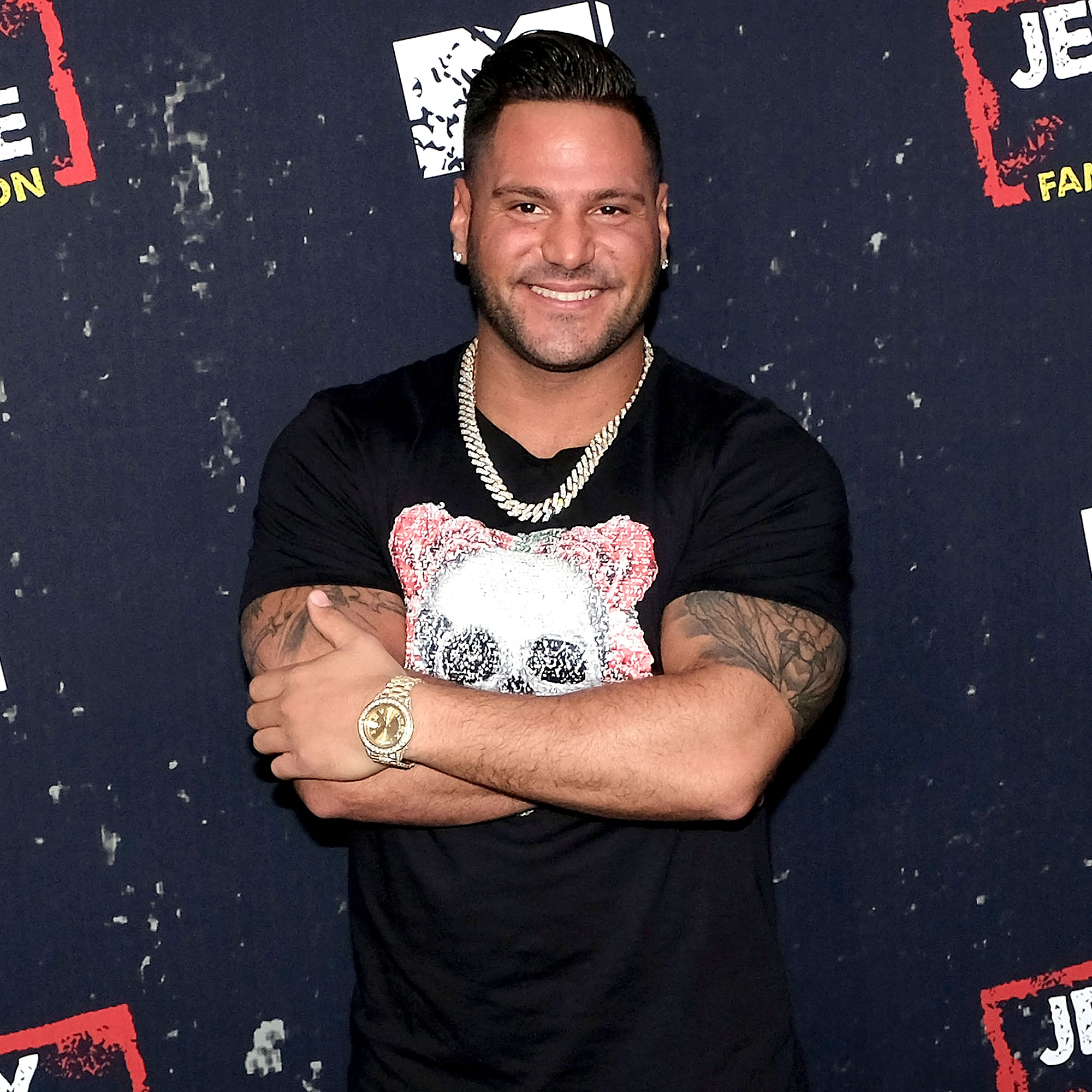 Days after the incident made headlines, Ortiz-Magro broke his silence via social media, claiming to feel “grateful” for his “real friends” amid the drama. “You learn who really cares about you when your [sic] down and out and than [sic] you see who doesn’t! But I guess they call it the weeding process,” he noted in an Instagram Story, describing his ups and downs “as lessons.”

This wasn’t Ortiz-Magro’s first run-in with the law. In November 2019, he pleaded guilty to seven misdemeanor charges following an alleged altercation with Harley. At the time, he was put on a three-year probation as part of a plea deal, which also included community labor, a fine and a 52-week domestic violence class. Given her former flame’s history, Harley has seemingly been wary about their child’s safety.

“Jen has been concerned about his behavior in front of Ariana and it’s been an issue she’s been worried about,” a second source told Us following the April arrest. “She knows he always has this pattern and that he does not change.”

Rob Wilcox, a spokesman for the Los Angeles City Attorney’s Office, recently told Us that Ortiz-Magro’s probation violation hearing is set for June 29. The MTV personality’s lawyers, however, asserted that “criminal charges were not warranted against Ronnie” after the incident.

If you or someone you know are experiencing domestic violence, please call the National Domestic Violence Hotline at 1-800-799-7233 for confidential support.