National anxiety over the next phase of the pandemic has reached a point where some Australians believe an early election is the best way to settle the politics, give federal leaders a mandate and steer the nation out of crisis.

“We would love to see an early election,” says one business leader who is frustrated at the way populism rules the debate over the policies needed this year and beyond. 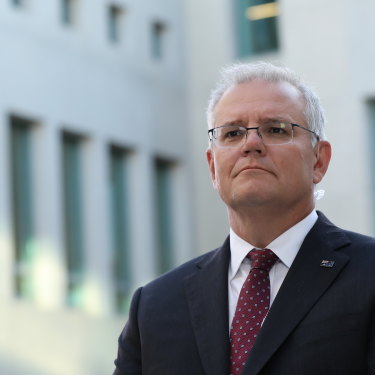 Prime Minister Scott Morrison does not want to calm the farm. He wants to talk about the forest fire next door.Credit:Dominic Lorrimer

Fear of the coronavirus seems stronger than ever despite the country’s extraordinary success against COVID-19. That fear has the power to decide the next election. So much power, in fact, that no political leader will take the risk of swimming against the tide.

Those who have to deal with political leaders have to be careful about what they say, but they know they will be forced to wait until after the election before they find out when the federal government will open the international border. The sooner the election, the sooner everyone knows the answer.

Scott Morrison sees this national mood and knows how to put it to use. He has adjusted his message to Australians in the past two weeks to warn of greater dangers ahead, to the point where he seems to stoke the fears.

Four months ago, when the country emerged from summer lockdowns and border closures, the Prime Minister thought the risks were subsiding. Confident that vaccines were on their way, he said COVID-19 could present a similar risk to many other viruses already in the community.

“What I’m saying is that the risk environment is reducing,” he said on February 5.

Not any more. Morrison now argues the pandemic is a greater threat than it was one year ago. “The pandemic is raging. The pandemic is morphing. It’s changing every day,” he said last Tuesday. “I’m not going to take risks with Australians’ lives.”

When Virgin chief executive Jayne Hrdlicka called for a road map to open the borders but made her unwise remark that “some people may die” from the pandemic, Morrison made no attempt to acknowledge her case for a clear plan to open the country. He slapped down the remark as “insensitive” and said it was difficult to “have any truck” with what she was saying.

So Morrison does not want to calm the farm. He wants to talk about the forest fire next door.

A clear majority wants this caution. The Resolve Political Monitor, published by The Sydney Morning Herald and The Age on Tuesday, shows overwhelming support for border controls at a time when 3.4 million people have died from COVID-19 worldwide.

Asked about the federal budget assumption the border will stay closed until the middle of next year, 44 per cent said this was about right and 33 per cent said it was too optimistic. Only 9 per cent thought it was too pessimistic. Those who want a faster plan to open the border are clearly in the minority.

The same survey, based on responses from 1622 voters online in the five days after the budget, also showed majority support for the overall budget strategy, with 62 per cent agreeing with the priority of stimulus spending. Only 17 per cent prefer action on deficits and debt.

The government has its own surveys showing similar concerns, which helps explain why Morrison said he was “not overly troubled” by the results.

This is true of other results in Resolve Political Monitor, too. The survey reveals what the government knows. The Liberal Party’s polling is finding the same reluctance to open the border. Morrison reflects the mood of the focus groups with his new tone.

Morrison has been testing his new message since the May 11 budget, when Treasurer Josh Frydenberg outlined $74.6 billion in new spending on aged care, tax cuts, mental health, skills, disability services and more. Day by day, he has honed the message to be ready for the election.

And the Coalition went into campaign mode this week. Morrison went to Lilley in Brisbane for instance, held by Labor on a margin of just 0.64 per cent, and Dunkley in suburban Melbourne, held by Labor by 2.7 per cent.

The visits to Coalition seats also took Morrison to Deakin, Goldstein and La Trobe in Melbourne, Bass and Braddon in Tasmania and at least five seats in Queensland: Bonner, Brisbane, Flynn, Forde and Longman.

Morrison still strikes some observers, especially women, as too belligerent and arrogant at times. He has floundered on social issues over the past few months. Some expert observers, distant from Canberra but familiar with its ways, think he has been off his game since Brittany Higgins went public with her allegations of rape in Parliament House on February 15.

Now, with a budget to sell, Morrison is back on safer ground. Again, the Resolve Political Monitor shows why. When voters are asked about policy issues, they generally favour the Coalition as the better party to run the country.

Asked who is best to manage the COVID-19 situation, 46 per cent name the Coalition but only 20 per cent prefer Labor. The government’s support is up from 42 per cent in the survey one month earlier.

On economic management, 46 per cent name the Coalition as best to manage the issue but only 20 per cent name Labor. The result one month ago was much closer: 43 to 21 per cent.

This is a different sort of budget bounce for a government. It is not the jump in primary vote that observers usually watch for. That core support was largely unchanged for both major parties in the latest survey. Resolve director Jim Reed says the result is “way too close to call” in two-party terms.

And the Coalition goes to the election with a majority of one in the lower house, a starting position with no political capital to spare. Morrison has to craft his message to capture the national mood.

On vaccines, he wants older Australians to take the AstraZeneca jab but is not going to force the issue in a way that provokes a backlash. It’s a free country, he says. And he is right. The government is in no position to dictate this personal decision when more supplies from Pfizer and Moderna are due to arrive. But this is one area where Morrison’s warnings about the pandemic could deliver a policy gain by convincing people to roll up their sleeves.

On borders, he is deliberately vague. The government suggests it will open the international borders in the middle of 2022. This is central to the federal budget, which is a policy document authored by ministers. But Morrison presents the date as merely an assumption.

On quarantine he is passive. He waits for state leaders to come to him with proposals and chooses some, such as the plan for a new facility in or near Melbourne, and rejects others, such as the sketchy proposal for Toowoomba. The last big federal initiative, to expand Howard Springs in the Northern Territory, was finalised in December. Morrison seeks to avoid the risk of making quarantine a greater federal responsibility.

Even so, the government neglects the Australian employers and communities that need a road map to open borders. Margy Osmond, the chief executive of the Tourism and Transport Forum, says anyone who depends on tourism is in “diabolical” trouble and the daily political doorstops, with ideas like vaccine passports, are not helping.

“There are too many different communications circulating all over the shop,” she says. “There is a desperate need for some sort of national unity.”

Yet national cabinet is back to meeting once every month. There is no sense of the urgency that led Morrison to put the peak group on an “operational footing” just six weeks ago.

While Morrison seems too cautious for some business leaders, he is in tune with scientists on the continuing risks.

“The PM is correct the pandemic is changing,” says Mary-Louise McLaws, an epidemiologist at the University of NSW. “Pandemics shouldn’t be viewed from a linear perspective as there are many facilitators that do not have equal impact and some that have more impact than the sum of each.”

Those factors include the vaccination rate and the variants overseas. Getting things wrong, says McLaws, could quickly throw Australia into another wave of infection.

Just as Australians want to play it safe, so does Morrison.

For the moment, the political imperative is to keep people anxious until their votes are counted. The path to policy certainty runs through the ballot box. No wonder some want to get there as fast as possible.