Netball Australia interim chief executive Ron Steiner has warned Super Netball could be placed back into a hub to ensure the competition goes ahead as the COVID-19 situation in Victoria remains uncertain.

Super Netball executives held a series of crisis talks this week following a tumultuous round five, which saw the Giants forced into five days of hotel quarantine after border restrictions changed while the team was on a flight to Perth. 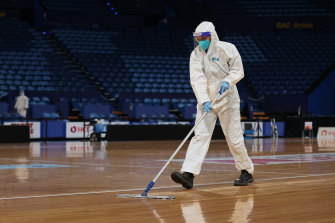 A staff member in PPE cleans the court following the round five Super Netball match between the Fever and the Giants.Credit:Getty

“[A return to hub life] is an option and as for the location, there are also a number of options. We are looking at what is the most logical one from a travel point of view and a logical one for accommodation.

“Some people say you should have more certainty but I think we want to provide the respect to players and team to give as much information as we can possibly share, so we are minimising the uncertainty.”

The most likely scenario would be a hub in either Queensland or NSW with the competition running until August 29. Last year, the entire Super Netball season was held in Queensland.

Melbourne-based teams the Vixens and Magpies were able to leave Victoria ahead of the lockdown last week but have been given no certainty for next week’s fixtures. 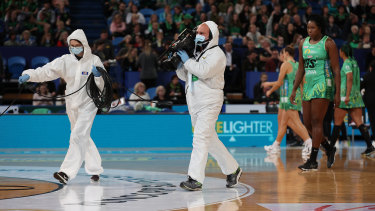 Two members of the media walk across the court wearing PPE during the round five match between the Fever and the Giants. Credit:Getty

On Friday, Victoria recorded four new cases with chief health officer Brett Sutton revealing sequencing on two of the original West Melbourne cases had been identified as a new Delta variant, which is considered to be more easily transmissable.

Steiner said just putting the two Victorian teams into their own hub was also a possibility, but the move may not be enough to satisfy some state governments, such as Western Australia, to receive exemptions to travel.

Preparing for the NSW derby this Sunday, Swifts star Helen Housby said the players hoped the situation in Victoria would not see them return to strict protocols like last year.

“We are obviously fingers crossed not looking to go back into a hub and would probably try and do everything possible to make the season happen in another way but you don’t really know what’s around the corner,” Housby said.

“We are capable of anything, last year showed that. But fingers crossed it doesn’t go the way it did last year.”

Swifts coach Briony Akle said the NSW derby was the club’s biggest game of the season to date.

With the Giants on the top of the ladder in their best start to a season since 2017, Akle said the matchup will be a challenge for the Swifts to prove they are still the no.1 side in the state.

“This rivalry is pretty intense now … sometimes it can get very heated out there on court,” she said. “It shows the passion both sides have, it shows netball at the top level is pretty brutal and what our athletes put themselves through.”

The Swifts will take on the Giants at Ken Rosewall Arena on Sunday.