Researchers identify 13-million-year-old bacteria in permafrost samples collected in the Swiss Alps, which could be used in bioreactors to break down plastic waste

Researchers in Switzerland have discovered a trove of new bacteria in the country’s thawing permafrost that could be useful in breaking down plastic waste.

A team of researchers from the Swiss Federal Institute for Forest, Snow and Landscape Research (WSL) collected samples from the permafrost on Schafberg mountain in the eastern Alps.

According to WSL’s Beat Frey, the team has so far identified 10 new species of hypothermic bacteria from these samples, as well as a new kind of yeast, 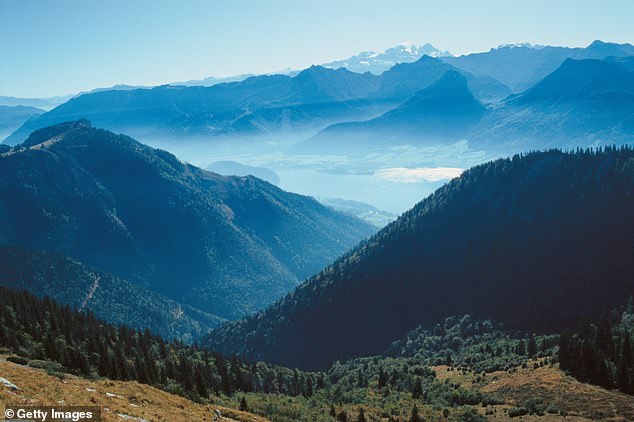 Frey estimates that there might be over 100 more undiscovered bacteria species in samples they haven’t yet analyzed, according to a report in SwissInfo.

‘We never expected this,’ Frey said in an interview. ‘If we find 1,000 species, around 300 of them are species that only exist in permafrost.’

Frey believes some of the new types of bacteria could be used in bioreactors to help break down plastic waste to free up space in landfills and lessen pollution.

In the past, teams from WSL have had success using microorganisms for other environmentally beneficial purposes.

One past project used enzymes from permafrost bacteria in laundry detergent, making it effective at lower water temperatures, something that could reduce energy usage if widely adopted.

According to Frey, permafrost covers an estimated 5% of Switzerland and contains a much more diverse mix of microorganisms than typically found in other parts of the country.

The new bacteria shows some promise in helping to break down plastic waste, and researchers say permafrost in the Swiss Alps could be a ‘gold mine’ for new microorganisms

The Schafberg samples, which were taken from an altitude of around 9,800 feet, and are believed to be around 13million years old.

According to Frey, the Swiss permafrost ‘could become a gold mine for humans,’ but there’s also a chance that the team could discover some unwelcome new microorganisms alongside.

It’s possible there could be just as many undocumented viruses lying dormant in the permafrost, which could prove to be dangerous.

According to Frey, the benefit of permafrost is that it leaves most microbial life, virulent or benign, in a kind of sleep state, but ‘[t]he big question is what happens when they wake up, due to climate change, for example?’

WHAT IS PERMAFROST AND WHAT HAPPENS IF IT MELTS?

Permafrost is a permanently frozen layer below the Earth’s surface found in Arctic regions such as Alaska, Siberia and Canada.

It typically consists of soil, gravel and sand bound together by ice, and is classified as ground that has remained below 0°C (32°F) for at least two years.

It is estimated 1,500 billion tons of carbon is stored in the world’s permafrost – more than twice the amount found in the atmosphere.

The carbon comes in the form of ancient vegetation and soil that has remained frozen for millennia.

If global warming were to melt the world’s permafrost, it could release thousands of tonnes of carbon dioxide and methane into the atmosphere.

Because some permafrost regions have stayed frozen for thousands of years, it is of particular interest for scientists.

Ancient remains found in permafrost are among the most complete ever found because the ice stops organic matter from decomposing.

A number of 2,500-year-old bodies buried in Siberia by a group of nomads known as the Scythians have been found with their tattooed skin still intact.

A baby mammoth corpse uncovered on Russia’s Arctic coast in 2010 still sported clumps of its hair despite being more than 39,000 years old.

Permafrost is also used in the study of Earth’s geological history as soil and minerals buried deep in Arctic regions for thousands of years can be dug up and studied today.