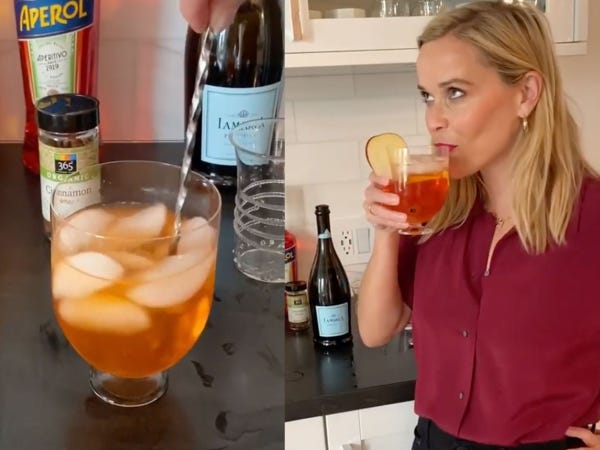 Reese Witherspoon drinks a green smoothie for breakfast every day, but she also enjoys a cocktail once in a while.

And the "Little Fires Everywhere" star took to Instagram on Tuesday to share the recipe for her favorite fall drink.

My Fizzy Apple Cider cocktail recipe! Perfect for fall and pairs well with just about any dance move 💃🏼🍂🍎

All you need to make the drink at home are: apple cider, Aperol, club soda, and prosecco.

Witherspoon demonstrates how to make the drink in her video, but provides no specific measurements with her recipe — so add as much or as little as you please.

She begins by pouring about half a cup of apple cider into a glass with ice, and then throws in a shot of Aperol.

Witherspoon then attempts to open the fizzy club soda, which ends up exploding all over her kitchen floor.

But the "Big Little Lies" star remains unfazed. She pours a bit of club soda into the glass and gives the drink a stir before topping it off with some prosecco and taking a quick sip.

Last but not least is the final and most important ingredient: dancing.

After doing a little jig, Witherspoon adds an apple slice to the rim for garnish before taking a big sip.

"Perfect for fall," Witherspoon wrote in the caption. "And pairs well with just about any dance move."

Witherspoon's cocktail has the nod of approval from NYC mixologists

New York City mixologists Aleksey Reznikov of The Garrett and Gregory Lucas and Parker Boase of Liquid Lab NYC all agreed that Witherspoon's cocktail looks great — although they have a few tips that could make it even better.

Lucas and Boase recommend adding a splash of lemon juice to help "balance out the cocktail."

"It would definitely add a brilliant tart finish to the drink," they told Insider.

The pair said you can also skip the club soda entirely and just add Champagne for a "classier kick" that will still achieve the same texture.

Reznikov said it's also important to make sure you don't use more apple cider than Aperol in your drink, and recommends adding at least three ounces of prosecco with "a heavy splash of seltzer to cut all the sweetness."

Witherspoon's followers love the drink too

The drink has already been a huge hit on Witherspoon's Instagram, racking up nearly 324,000 views at the time of writing.

Witherspoon's drink also caught the attention of some of her famous friends.