Voting for the 21 seats on the Victorian Bar ends on Wednesday and revolution is in the air.

The “Vote For Change” joint ticket, which is standing for all 21 Bar council seats, is increasingly confident that it will triumph in the record field of more than 60 candidates. This would spell doom for Wendy Harris QC’s dream of a tradition-breaking second term as president.

It has been quite the year for the Bar’s 2192 fee-paying members, many of whom have seen work dry up after the lockdown shut down the courts. Spending and reform at the Bar has been a hot potato. At the recent annual general meeting the cost of the dinner for Attorney-General Christian Porter and others hosted by outgoing Victorian Bar president Matt Collins QC at his South Yarra home last November was finally revealed – after a transparency campaign for most of the year. The suppertime soiree cost $11,000 for about 60 people.

Also, Harris was rounded on for her “old dogs” reference to reform critics, which infuriated many but sounded like a bit of fun to us. Critics have been complaining about the cost of several consultancy reports into Bar operations.

Harris has tried to institute reforms to the Bar’s Essoign Club and Readers’ Course, but many have been given a frosty reception. Her attempt to emulate Collins, who was president for two years, with a second term, must have miffed vice president Simon Marks QC, who would have expected to replace her next year. Marks is now a member of the rebel alliance and if it continues its present trajectory, he might still do so. 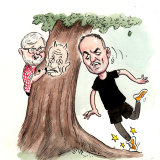 Former prime minister Kevin Rudd’s extraordinary petition for a Royal Commission into News Corporation and media diversity isn’t the only thing to smack News boss Michael Miller in the face when he was least expecting it.

The executive chairman was out running in bushland a few weeks ago on the NSW south coast. In keeping with his cautious approach to life, Miller had a careful eye on the trail lest he trip up on the uneven ground. Too careful, it seems. Miller ran slap bang into a tree that seemingly materialised out of nowhere.

Miller busted up his leg. He was spotted on Sunday performing parental duties attending a kids basketball tournament at Waverley College in Sydney’s eastern suburbs while sporting a moon boot and crutches.

Speaking of KRudd’s petition, it was curious to see Labor frontbencher Andrew Leigh tabling the document in parliament on Monday despite the opposition apparently having no position on the call for the Royal Commission.

No position? That’s certainly not what it looks like, Albo.

But how’s this for a position: Leigh himself has written no less than nine opinion pieces for NewsCorp papers in the past two years. A lot like Rudd himself, Leigh clearly isn’t so averse to the so-called Evil Empire when it suits him. As recently as September, Leigh was published in Melbourne’s Herald Sun – NewsCorp’s highest-selling daily paper – and Brisbane’s Courier Mail taking a swipe at the government in a think piece titled “Fairness is another casualty”. In March, he had another outing in the Victorian tabloid – that time, a navel-gazing exercise on the pandemic titled, “Let’s take this chance to rebuild our solidarity”. In January, he was again opining in the same papers on ways to lend a helping hand to bushfire relief. And so it goes.

One immediate beneficiary of Joe Biden’s victory over Donald Trump in the US presidential election is none other than former finance minister Mathias Cormann.

CBD’s Paris sources now assess the Belgian-born Cormann as a “good chance” for his dream job of running the OECD.

Up until now, the front runner has been Kiwi-born Christopher Liddell, Assistant to the President and Deputy Chief of Staff for Policy Coordination at the White House. Liddell was previously an executive at General Motors and Microsoft. But the times no longer suit him. Working in Trump’s office has suddenly gotten pretty old pretty quickly, and as a conservative Liddell can’t rely on New Zealand’s support. As CBD reported, Cormann flew out from Perth on Sunday and will spend the next couple of weeks pressing the flesh in Europe, no doubt ably helped by his old Senate buddy, George Brandis, the Australian High Commissioner to Britain. Best of luck. For the lucky chosen one, the five-year term as secretary-general of the world finance organisation starts next June.