Blasband says she “feels” for her former costars for not having “the strength to walk out with me.”

The stars of the original “Real World: New York” recently reunited for a Paramount+ “Homecoming” series filmed over just six days amid the coronavirus pandemic. One of the cast members, however, couldn’t even make it that long after things started getting real — and walked out.

On last Thursday’s episode, Rebecca “Becky” Blasband quit the series following a discussion with Black costar and activist Kevin Powell about race. The two were revisiting an argument they had on the original, 1992 series, in which Blasband said she believed America was a melting pot of opportunity and discounted Powell’s assertion that the scales had always been tipped in her favor as a white person.

As Blasband’s defensiveness escalated throughout the new, 2021 conversation, she eventually decided to tap out of the show altogether. 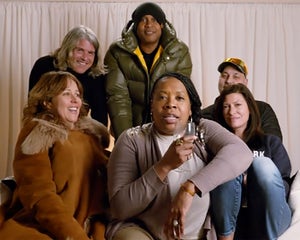 “I left the Real World Homecoming Series because it is a lie. I had been there before, they told me this time would be different,” she wrote in an Instagram statement over the weekend. “I realized quickly that it is not the platform for important human discussion on sensitive issues. In my exit interview, I expressed exactly this. The producers, of course, cannot air this.”

“I do not write this in my defense as I need no defense. Never have I raised a racist word. Not committed a racist action against people of color,” she continued. “But when critical thinking goes out the window you can point to this kind of media. It is a kind of brainwashing. Edited, characterized, lacking in depth.”

“In this country we believe in ‘the American dream.’ This also has become a lie. And you wonder why our country is in such disarray,” she concluded. “I do not regret leaving. Nor will I raise a word against my cast members, only that I feel for them, that they did not have the strength to walk out with me.”

In the second episode of the reunion series, Powell apologized for calling Blasband a “bitch” back in 1992 and stressed the importance of listening during these tough conversations about race. Blasband said she believed that, when it comes to racism, there’s a difference between “people who may not know what you’re going through and people who are using their power to keep you down or to hate.” She also felt it was “hurtful and heartbreaking” to be told she was part of the “white system.”

As Kevin stressed the importance of listening and educating oneself as the conversation continued in the third episode, Rebecca’s defensiveness continued as well as she asked to “take the politicizing” and color out of the situation. Noting that what she was about to say was “gonna sound racist,” she added she “lost [her] skin color” while participating in an Afro-Brazilian dance class.

He then asked her to acknowledge her privilege, before she accused him of “attacking” her. Eventually, Norman Korpi told her she would look terrible when the show aired — not wrong — before telling her to simply zip it.

Becky later spoke to Julie Gentry off-camera, telling her she felt “really used” to make a point about race. After the two pulled off their mics, Becky packed up her things and got ready to leave. As she exited — without warning anyone — she told her costars, “This is bullshit, I’m not into it. Goodbye. I don’t want to be part of this anymore. It’s not real.”

In her final confessional she added, “The conversation hadn’t evolved and it’s because people want to fight. I’m not in the fight. I think he’s trying to make a statement that he needed to make because of the times we’re in and make me, not the scapegoat, but the person he was going to fight against. To all of them, it’s been real.”