A well red queen! Letizia of Spain recycles a crimson two-piece from Zara as she and King Felipe VI present the prestigious Cervantes literary prize to poet Francisco Brines

Queen Letizia Queen of Spain isn’t shy about rocking high street pieces in her royal wardrobe, and today she showed off her style credentials in an eye-catching two piece from Zara.

The mother-of-two, 48, and her husband King Felipe VI travelled to Oliva, near Valencia, to present Spanish poet Francisco Brines, 89, with his Cervantes Prize 2020.

Brines won the Miguel de Cervantes Prize for Literature in the Spanish Language 2020 and the sovereign had the special attention to deliver it to him in his home, due to his fragile health.

The Cervantes Prizes are traditionally handed out during an annual ceremony in Alcala de Henares on 23 April.

Letizia commanded attention for the occasion in the orange tunic with an asymmetric hem, teamed with matching trousers – a look recycled from her 2019 visit to Argentina.

Queen Letizia of Spain commanded attention in an orange tunic with an asymmetric hem, teamed with matching trousers from Zara – a look recycled from her 2019 visit to Argentina – as she arrived at the presentation of the Miguel de Cervantes Prize 2020 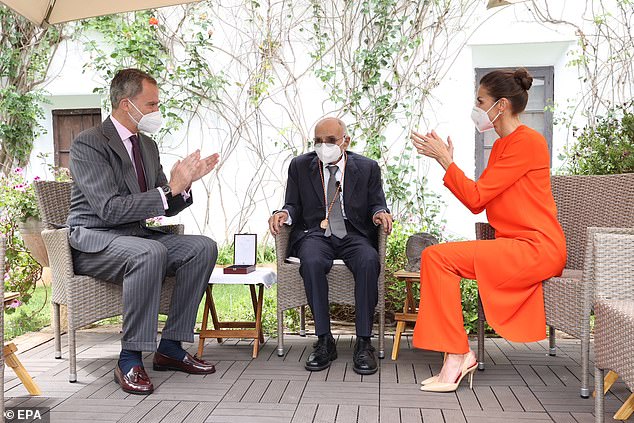 Felipe VI and Letizia, both wearing masks, presented Brines, centre, with his award and applauded him

Opting for the monochrome look, she accessorised with a chic clutch in a matching shade, and teamed the ensemble with towering nude slingbacks.

Her brown locks were styled in a neat bun, and she scaled back on accessories to keep the focus on her statement top.

She was wearing little jewellery, save from a pair of small golden hoop earrings and her favourite ring.

She brought the drama with a smokey eye and mascara bringing the attention to her hazelnut gaze, and a touch of blush to compliment her natural glow. 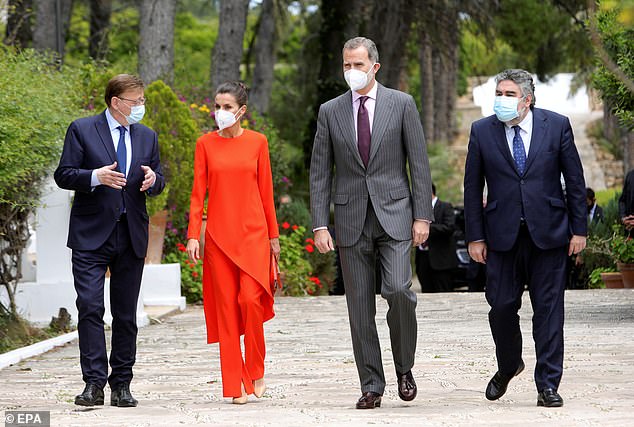 King Felipe VI looked smart in a grey suit with a pink shirt and burgundy tie.

The pair were both wearing white facial coverings in keeping with Spain’s Covid-19 rules.

It was because of the pandemic that Francisco Brines couldn’t travel to receive his prize during the official ceremony, in spite of being awarded the most prestigious literary honour in the country.

The award, which is the highest recognition awarded to the creative work of Spanish and Latin American writers, comes with a money prize of €125,000 and is granted by the Spanish Minister of Culture. 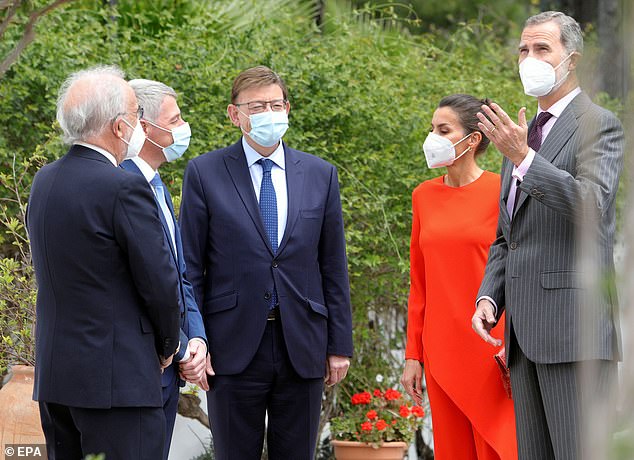 This year, it was awarded to Brines for awarded him the prize for “his poetic work that goes from the carnal and the purely human to the metaphysical, the spiritual, towards an aspiration for beauty and immortality,’ a statement read.

‘He is the intimate poet of the 1950s generation who has delved most deeply into the experience of the individual human being in the face of memory, the passage of time and vital exaltation,’ it went on.

Letizia and Felipe VI travelled to Brines’ home this morning, where they presented his with the award and applauded his work.

It has been a busy week for Letizia so far.

Yesterday, she stole the show at the Children and Youth Literary Awards Ceremony in Madrid. 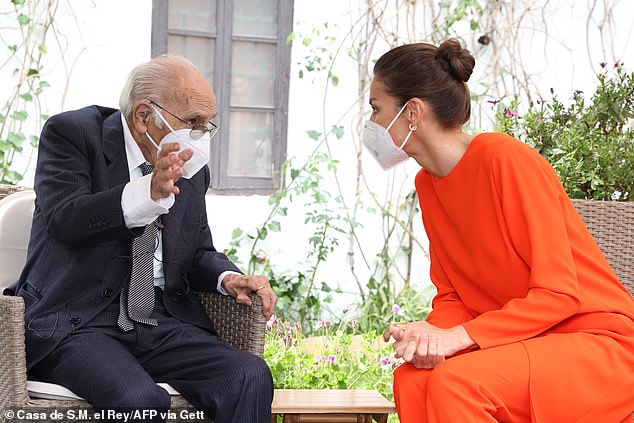 The former journalist was photographed in deep conversation with the poet, who won the highest literary award in the country 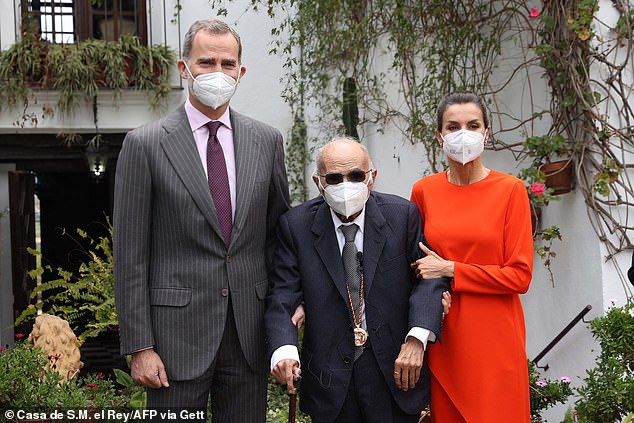 Francesco Brines, centre, proudly put his medal on for a picture with his Queen and King today in Oliva

The mother-of-two teamed her patterned dress with a pair of black stilettos and sported a stylish black handbag by her side.

During the ceremony, which is also known as ‘the Gran Angular’ and ‘El Barco De Vapor’ literature awards, Letizia met with members of staff and greeted attendees upon her arrival.

She also spoke with the Spanish Minister of Education Isabel Celaa before going on to make a speech and present the winners with their awards. 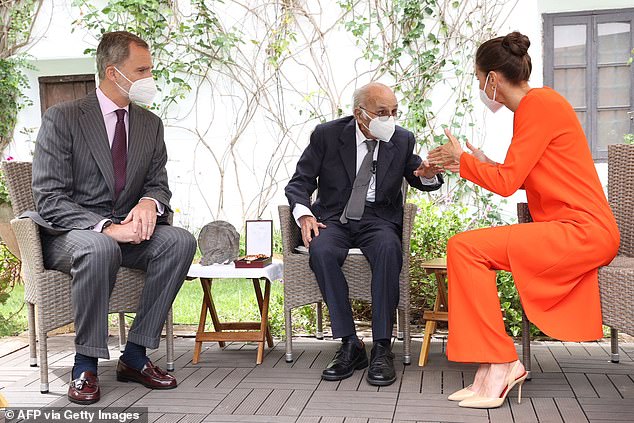 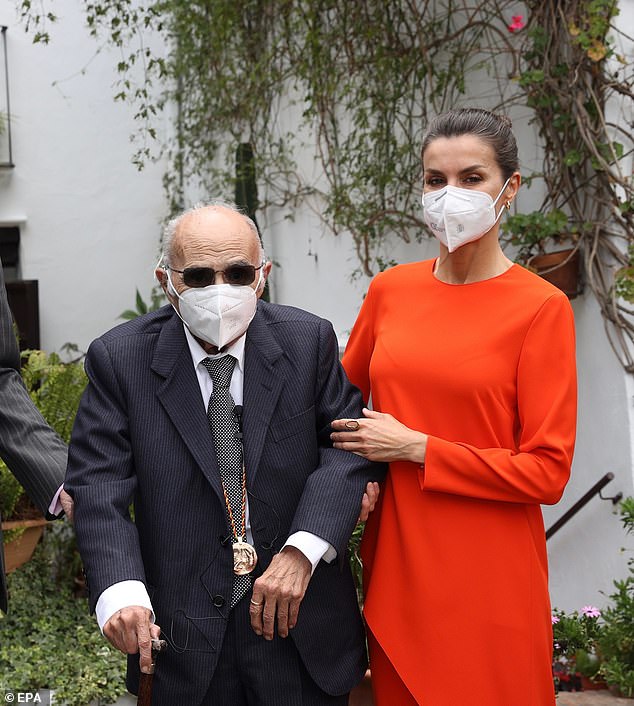 The scenes come just days after the royal attended the ceremony of the delivery of the National Flag to the ACAVIET (Aviation Academy of the Army) in Colmenar Viejo in Madrid.

Their attendance at the Istituto Cervantes in Alcala de Henares came just a day after Letizia and Felipe were joined by their daughters Princesses Leonor, 15, and Sofia, 13, for the launching ceremony of a new submarine.

The family were gathered together at Navantia, a Spanish state-owned shipbuilding company in Madrid, to preside over the launching ceremony of the S-81 Isaac Peral.

The Isaac Peral, named after a 19th century Spanish submarine designer, is one of four vessels that will enter service in the Spanish Navy in the coming years.