Elite Australian winter athletes going overseas for training and competition must be vaccinated for COVID-19 but it’s unclear if a strict “no jab, no play” policy will apply at next year’s Beijing Winter Olympics.

An Olympic Winter Institute of Australia draft policy, affecting about 30 contracted athletes, has been endorsed by the Australian Olympic Committee even though vaccination remains optional for the large contingent of athletes and officials bound for next month’s Tokyo Olympics. 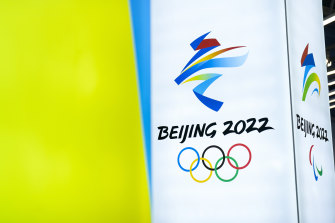 The Winter Olympics will be held in Beijing next year.Credit:AP

While the AOC has backed the move – pointing out that “significant planning has gone into keeping the Australian Olympic team safe as well as ensuring the safety of the Japanese people” – Australia’s Olympic leaders stopped short of mandating vaccination for up to 480 athletes plus officials soon to hit the road.

“The AOC supports the OWIA policy for its contracted athletes, given they would be required to compete overseas in multiple events, locations and countries in winter conditions,” an AOC spokesperson said.

However, the alpine sports body’s bold approach doesn’t necessarily mean all athletes wanting to wear the green and gold in Beijing must be vaccinated. Currently, it remains a personal choice for athletes outside the OWIA, as is the case for Summer Olympians.

“AOC is still [currently] selecting athletes for the Tokyo games in 32 sports. There are no athletes yet selected for Beijing 2022 but winter athletes will be looking to travel to various overseas competitions in order to qualify for – and ultimately seek selection for Beijing.”

The inherent risks of heading abroad without vaccinations was laid bare for Australia’s skateboarding contingent when three members of the team, including a 13-year-old skater, tested positive to COVID-19 last month after travelling to the United States for a qualifying event.

The 11-skater team, as well as officials, was recommended to have one shot of the vaccination in Australia and the second in the US. Some members of the team chose not to do so.

Mirroring the approach taken by the OWIA, Paralympics Australia has made vaccination compulsory for the more than 180 para-athletes and officials going to Japan for the 12-day event, starting in late August about two weeks after the Olympics conclude.

But PA this week said it was still managing vaccine hesitancy among a “handful” of its athletes.

Olympians and Paralympians have had access to a fast-tracked vaccine – two jabs of Pfizer – under a vaccination roll-out approved by the federal government, funded by the AOC and completed in conjunction with Aspen Medical, one of the Olympic body’s established partners.

Australia’s Olympic chef de mission Ian Chesterman has already indicated he was confident that close to 100 per cent of Australia’s athletes will be vaccinated when they arrive in Tokyo.

Late last month he was yet to identify any athlete who didn’t want to have the jab.

The AOC continues to advise athletes to protect themselves against COVID-19.

“The AOC encourages all athletes to be vaccinated with regards to Tokyo 2020. The rules are in place for Tokyo and significant planning has gone into keeping the Australian Olympic team safe as well as ensuring the safety of the Japanese people,” it said.