The movie that Russell Crowe has been directing and shooting around Sydney has been shut down by a positive COVID-19 case.

The Oscar winner announced the suspension of the thriller Poker Face six days before the end of filming. In a series of tweets Crowe said the cast and crew, who had been shooting the film under strict COVID-19 protocols for more than 11 weeks, were isolating. 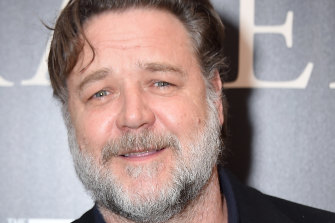 Russell Crowe is directing and starring in the thriller Poker Face.Credit:Getty

“Unfortunately six days from the end of our shoot on Poker Face we have had a confirmed positive COVID case amongst our crew and a second possible positive under further investigation by our Poker Face COVID team and NSW Health,” Crowe wrote.

“For the safety of cast and crew and the wider community, the production has been immediately paused and everyone instructed to isolate whilst the situation is looked into. We have followed strict protocols with cast and crew being tested three times a week for the past 11-plus weeks.”

Crowe said the crew had been wearing masks on set for the entire shoot, with the exception of three people with medical exemptions.

“We feel for the crew members involved, like all the people on this show they are both very committed team players and diligent in their approach to their work responsibilities,” Crowe wrote. “We also feel for the wider community going through these difficult times. We hope this situation will be confined and we can be back up and running very soon.”

Filming had been taking place at locations around Sydney, including the new Crown at Barangaroo, and on the south coast as well as at Fox Studios.

Crowe is playing a tech billionaire caught in a risky card game in a movie set in the world of high stakes poker and international finance. Other cast members include Liam Hemsworth, Elsa Pataky and Wu-Tang Clan frontman RZA.

Three weeks ago, Kiama MP Gareth Ward had a swipe at the production for shooting in the area during lockdown.

“This makes a total mockery of the Public Health Orders,” Ward tweeted. “People can’t see family and friends, funerals limited to 10, no cases in Shellharbour but still locked down but apparently ‘A-listers’ producing movies is essential?”

The shutdown for Poker Face follows two other blows for the country’s film industry in the last month. Netflix has moved production of a sequel to the Chris Hemsworth action-thriller Extraction to Prague, in the Czech Republic, because of the lockdown.

And shortly after the federal government announced it would generate more than $25 million for the NSW economy, the Natalie Portman movie Days of Abandonment fell over in Sydney last month.

American cable network HBO, which had commissioned the movie, blamed “unforeseen personal circumstances” for Portman’s withdrawal before the start of filming.