Princess Charlotte turned 6 on May 2, but apparently she likes to tell people she’s 16. And based on that amazing flip-it-back-and-forth hair in her birthday photo and her cheeky attitude, she might be right that her inner teenager is already coming out! 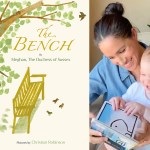 While her dad Prince William was on an outing on Tuesday, he revealed his daughter will say she’s 16 when asked how old she is, according to reports. Plus, the precocious kid says, “I’m 6 now. I’ll do what I want,” according to her dad.

While that could be annoyingly snotty coming from some 6-year-olds, we bet that in Charlotte’s adorable-to-Americans British accent and coming out of her sweet face, it would probably just make us LOL and love her even more. Wonder if the little royal’s sauciness comes from mom Kate Middleton‘s side or the Buckingham Palace family?

A post shared by Duke and Duchess of Cambridge (@dukeandduchessofcambridge)

Charlotte isn’t the only of the Duke and Duchess of Cambridge’s kids with attitude, apparently. In A Planet For Us All, Prince William’s documentary, he was asked by a curious child if Princess Charlotte was cheekier than Prince George, 7.

“No, they’re about as cheeky as each other,” William answered. “They’re very cheeky.”

No word on the cheeky quotient of the William and Kate’s third child Prince Louis, 3, but we suspect he’s going to follow in his brother and sister’s fresh footsteps!

See the meaning of our favorite royal baby names from around the world.