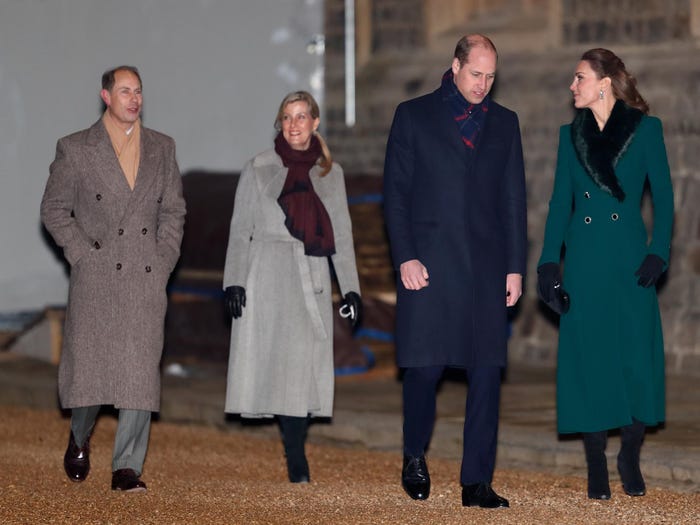 The Duke and Duchess of Cambridge were accused of breaking the UK's lockdown rules on a Christmas outing at the Queen's Norfolk home, Sandringham House, on Sunday evening, as reported by British publications the Daily Mail and Hello magazine.

Prince William and Kate Middleton, along with their three children, were photographed walking near the Earl and Countess of Wessex and the Wessexes' two kids on Sunday as they made their way around a mile-long trail called "Luminate," a Christmas attraction trail with "stunning lighting elements and fabulous light play, all set to ambient music," according to the website.

The website also states that Luminate falls into Tier 2 under the UK's lockdown system, which stipulates that only six people across multiple households are allowed to socialize together outside — the royal group exceeded that number by three people.

Pictures published by the Daily Mail show the two families — nine people in total — walking near each other, though the publication notes that the royals did follow social distancing rules. The royals did not appear to be wearing face masks in the Daily Mail's images of the outing.

When contacted, Insider did not receive an official statement from the Duke and Duchess of Cambridge's representatives. A source at Sandringham, also quoted in the Daily Mail, told Insider that "The two families were given separate consecutive slots to visit the trail just before it opened to the general public. They arrived and departed in their own family groups."

"As anyone with young children will know, there were moments on the 90-minute walk where it was difficult to keep the two family groups apart, particularly at bottlenecks on the trail," the Sandringham source added.

On Saturday, PM Boris Johnson announced tougher restrictions after news broke that a 70% more transmissible variant of the coronavirus was identified in different parts of the UK. This new mutation does not appear to be more deadly or resistant to existing vaccines, Business Insider's Joshua Zitser previously reported.

The UK's lockdowns are classified by different tiers — 1, 2, 3, and 4. Under the newly-introduced Tier 4 lockdown, the Guardian reports, all non-essential businesses must close and residents of Tier 4-designated areas have been issued a stay-at-home order. London and southeast England fall into this category.

Prince William and Kate were already criticized once for violating lockdown rules, as was William's cousin Princess Beatrice

Prince William and Kate took a three-day trip across the UK earlier this month to thank frontline workers for their service during the pandemic. They traveled by their private royal train and kicked off the trip by visiting Edinburgh, Scotland.

The official Kensington Palace Instagram account shared that the purpose of the trip was "to pay tribute to the inspiring work of those who have gone above and beyond to support communities across England, Scotland, and Wales."

Insider's royals reporter Mikhaila Friel wrote that the couple was criticized for violating lockdown rules in Edinburgh, where non-essential travel was banned at the time of their visit.

A spokesperson for the Scottish Government told Friel that it "was told in advance about the planned visit and were ensured that the royal household were aware of statutory restrictions in place in order to inform its decision to proceed."

Prince Beatrice also faced criticism for breaking lockdown rules by dining indoors in London on December 9 with people from multiple households. At the time of the dinner, London was under a Tier 2 lockdown that did not allow congregating indoors with people from outside your home, Insider's Monica Humphries previously reported.

A representative told the Mirror that Beatrice's dinner was business-related and "held in compliance with all government guidelines."