Prince William, 38, and Prince Harry, 35, were close growing up but in recent years the brothers have grown apart. A new book about Prince Harry’s step away from the Royal Family lays bare the rift that formed between the two brothers after William aired his concern about the speed with which Harry’s relationship with Meghan Markle was moving in 2017.

In Finding Freedom authors Omid Scobie and Carolyn Durand describe the turning point in Harry and William’s relationship after the older brother aired his concerns about the pace things were moving with Meghan.

They write: “Removing Meghan from the equation, Harry was also tired of the dynamic that had become established between him and his older brother.

“There had come a point when Harry no longer felt he needed looking after.

“There was a thin line between caring and condensing.

“Just because he went about his life differently than his brother didn’t make it wrong.

“William may have felt he was acting out of concern, but Harry was offended that his older brother still treated him as if her were immature.” 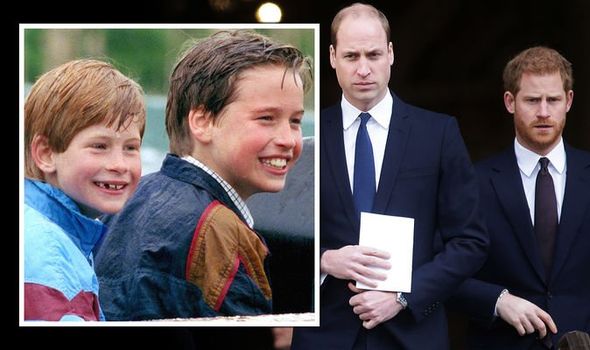 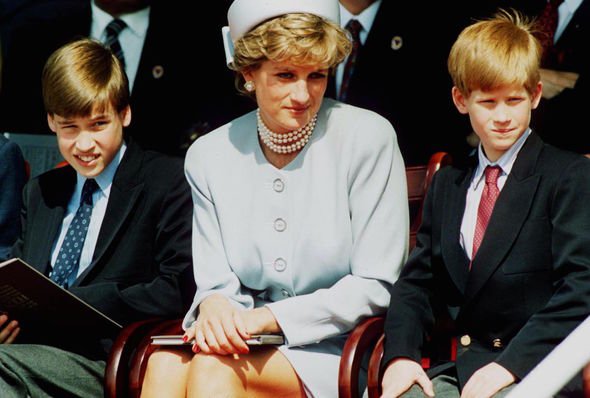 The brothers were competitive growing up and were energetic sparring partners always ready to poke fun at one another’s expense in front of the cameras.

However, as heir to the British throne Prince William took priority over Prince Harry when it came to their careers as working royals.

These ongoing tensions seemed create a rift between the two brothers during Harry’s last two years as a working royal.

Body language expert and analyst Judi James has analysed a series of photos which chart the evolution of Harry and William’s relationship from childhood to the present. 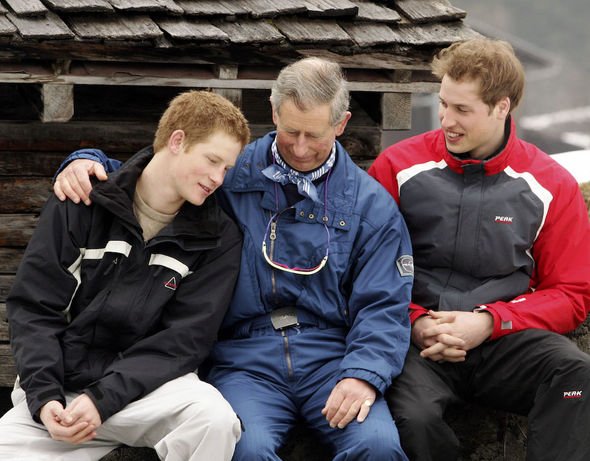 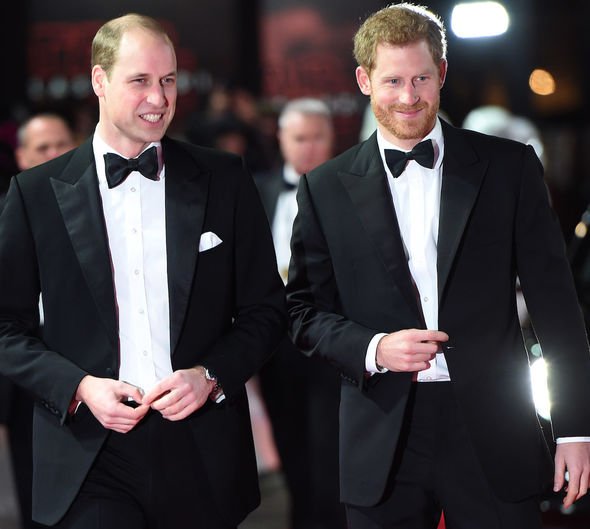 The royal rift in 7 photos

Judi said: “Diana doted on both her boys and the relationship looked mutually tactile and loving. Like many first-born children though, and especially one with his fate as a future king laid out, William’s body language always defined him as more serious and thoughtful, while Harry was very much the uninhibited second child who is more fearless and socially confident.

“Even before his mother’s death William began to show signs of being protective of both Diana and Harry.

“With her marriage crumbling William seems to have become more mature and empathetic.

“Diana told how he bought her some chocolates to cheer her up when she was upset and in this pose William quietly leans in close to his mother with a dipped head and more worried, watchful facial expression while Harry sits upright and absorbed in whatever it is they were attending.”

Judi said: “Now the three princes are left to bond alone it’s William still sitting to the side of the PDA here, watching with a slightly detached fondness as Charles places an arm around his younger son.

“William’s role in the group dynamic looks interesting here. He often masterminded and choreographed poses like this, especially at Kloisters, where his father looked more reluctant to get the PR stuff out of the way.

“William’s parental poses like this suggests he was not only taking a more serious, semi-parental role with his younger brother but his more tetchy father too, who was often impatient to get on with his skiing.”

Judi said: “As William and Harry moved into adulthood, the tie that binds, apart from their shared grieving at the loss of their mother, seemed to be their shared sense of humour and fun.

“This sense of naughtiness looked intrinsic to Harry, who was often seen as the joker in the Firm, but he clearly brought that side out in his rather more responsible and serious-looking brother as well as his wife Kate.

“The sibling double-act and the trio with Kate both appeared to work well and William often looked happiest and most relaxed when he was laughing with Harry.”

Judi said: “As signs of distancing between the two brothers became more obvious their tie-signs decreased, meaning they were no longer catching one another’s eye and using suppressed grins in public, but the mirroring between them was still visible and rather ironic.

“Even as they started to avoid one another they were still using subconscious mimicry to show the depth of their bonds and their like-minded thinking.

“This gave the impression that any rift was just temporary.

“Harry dismissed it as the kind of thing most brothers go through and although that did sound like a huge understatement at the time, the impression they gave was that they might just have needed to have been locked in a room together to talk things out properly and then heal. 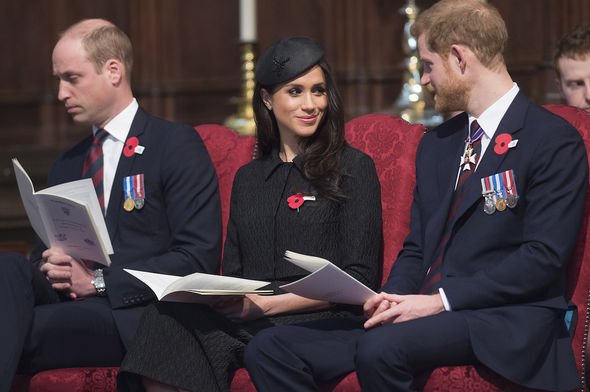 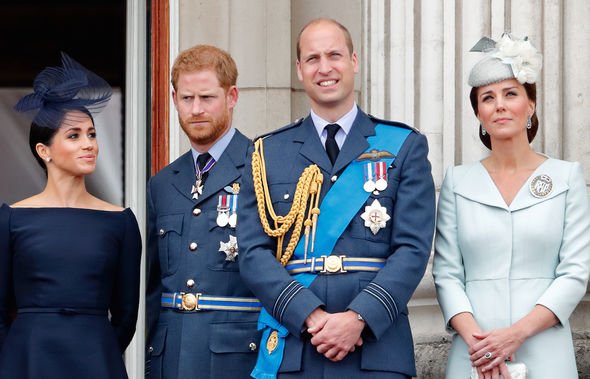 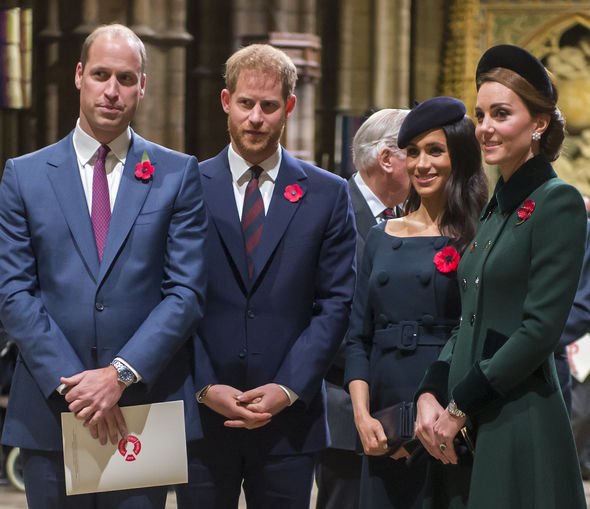 Judi said: “Caught at the end of the row beside a chatty Harry and Meghan, it’s William showing the signs of tension and awkwardness here.

“His head part turns away from the couple rather than being cocked to join in and his tightly crossed legs and meshed hand clasp suggest awkwardness.

Judi said: “The actual damage in the brother’s relationship began to show in public here and often the signals of the possible sibling tragedy were etched on Harry’s face.

“Protocol meant William and Kate tended to stand in front, giving them the advantage in terms of adopting mirrored and very professional ‘business-as-usual’ poses, but behind them here the anguish and discomfort seems etched on Harry’s face.

“Any proximity seemed to be causing them anxiety when it once used to energise and delight both of them.”

Judi said: “The assumption was that the two women had fallen out by now, meaning there was less attention on the brother’s body language.

“While Kate and Meghan display smiles though, both William and Harry look stilted and rather troubled.

“Their fig-leaf hand poses are mirrored, still suggesting some strong enduring bonds, but the pose itself is defensive and despite the mirroring there seemed to be no apparent use of the proximity to chat or use eye contact.”