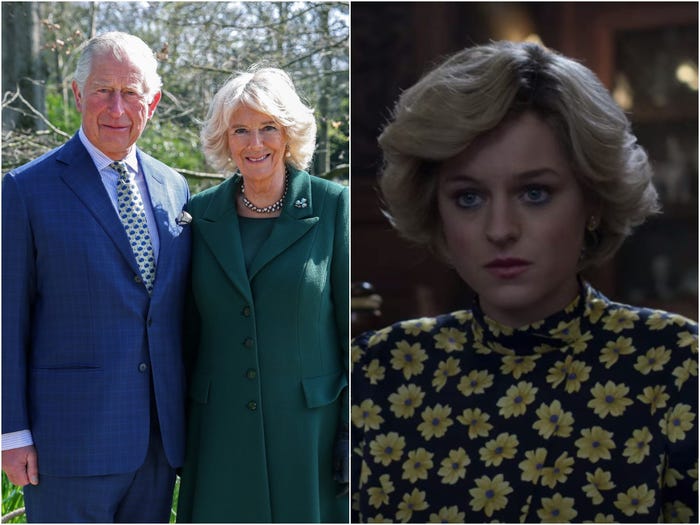 Prince Charles and Camilla, Duchess of Cornwall have disabled their Twitter replies after they were trolled by Princess Diana fans watching "The Crown."

The couple's most recent tweet, where they show support for 16 Days of Action against domestic violence, shows that only accounts they follow will be able to reply at the time of writing.

As Insider's Samantha Grindell previously reported, royal fans have been leaving comments on Charles and Camilla's posts in response to the fourth season of "The Crown," which aired on Netflix earlier this month. The show's latest episodes focus on the love triangle between Charles, Camilla, and Princess Diana.

The couple are yet to disable their Instagram comments.

A recent photo of Camilla, posted alongside her showing support for the Queen's Commonwealth Essay Competition, received floods of pro-Diana comments, with many fans writing the royal's name along with a heart emoji.

While the portrayal of Charles and Camilla's affair in "The Crown" has led to a resurgence of backlash against the couple, who got married in 2005, it's worth noting that the show has been accused of misleading viewers about what actually happened.

Hugo Vickers, a royal historian and author of "The Crown Dissected" told Insider's Darcy Schild that it's highly unlikely that Charles and Camilla were having an affair during the early years of his marriage to Diana.

"Apparently, Prince Charles saw Camilla once between the engagement and marriage, which was to politely hand over this little gift in person. That's what we are told," Vickers said, referring to an engraved bracelet he gave her as a parting gift. "To my understanding of the relationship, after that, he didn't see Camilla until 1986."

Speaking about things the latest season of "The Crown" got wrong about the royal family, Vickers also said it portrayed a "one-sided" perspective of Charles and Diana's relationship.

"The way this series portrays their relationship, you have Charles as a kind of wimp, and evil and unpleasant, shouting at his wife and things like that. We never get her massive tantrums, and the things that she did that he had to put up with. It's entirely one-sided," Vickers previously told Insider.

"Charles really did make a huge effort in the early days to accommodate [Diana]," he added.

Charles and Diana separated in 1992, and in 1994 the Prince of Wales publicly admitted to having an affair.

When asked by a journalist whether he had remained faithful throughout his marriage, the prince responded: "Yes … Until it became irretrievably broken down, us both having tried," according to Elle.

Clarence House and Buckingham Palace did not immediately respond to Insider's request for comment.