Australian chef de mission Ian Chesterman has confirmed the men’s rugby and rowing teams left a hole in the wall in the athletes accommodation, but believed it was “pretty easy to do”.

After the two Australian teams had to apologise to the Australian Olympic Committee amid reports cleaners had to mop up vomit and rooms had been left in an unacceptable state, Chesterman confirmed on Tuesday that a hole had also been left in the wall of one of the rooms.

“There was a hole in the wall, but that’s pretty easy to do,” he said.

“I understand there’s some big people and some very flimsy walls, temporary walls as well. I don’t think you had to do much to put a hole in the wall.”

Chesterman said he considered the damage minor and said the rooms were not trashed.

He said no disciplinary action would be taken against the individual athletes as they had already apologised for their actions. 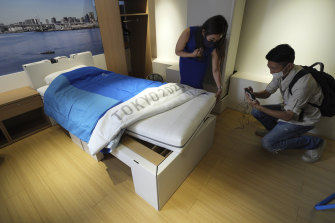 Journalists look at cardboard beds at the athletes village of the Tokyo Olympics and Paralympics prior to the start of the Games.Credit:AP

“I want to focus on the fact that some people have made a mistake and had left the room in conditions that we thought were unacceptable,” he said on Tuesday.

“It was unacceptable because people had to move into those rooms afterwards.”

On Monday, the AOC revealed a “few individuals” from the two teams had left their rooms in “messy and unacceptable state” prior to departing the athletes village.

He said multiple athletes involved, as well as those who engaged in a minor breach of COVID-19 protocols by mingling with competitors from other countries, had already expressed great remorse. 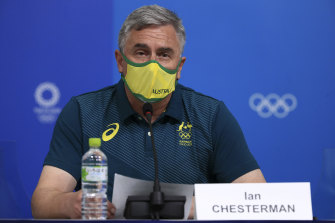 The AOC’s chef de mission Ian Chesterman said no action will be taken against the athletes as they have already apologised. Credit:Getty

“They feel disappointed they have contributed to this conversation about behavioural matters in a team that has been exceptional on and off the field,” he said.

“It’s a matter of a small number of people making a mistake and they’re going to have to live with that.”

Chesterman also revealed Australia’s emu and kangaroo mascots went missing from the team’s hotel for several days after they were taken by German athletes.

“We were very pleased to say they have returned. It was a bit of a mystery. There was a bit of a search and [we] were about to post wanted signs,” Chesterman said.

“It seems they enjoyed a pleasant holiday in Deutschland,” he said.

“The mascots enjoy holidays in the village from time to time. But we are very pleased they are back.”

Never miss a medal or great sporting moment with our Olympic update emailed daily. Sign up for our Sport newsletter here.