A crucial Senate crossbencher with the power to decide the fate of the government's university funding reforms says he will reveal his position within days ahead of a potential vote on budget day.

In a sign the Morrison government is eager to push the reforms to a vote in the Senate, the Job-Ready Graduates Bill is the first bill listed for debate when Parliament resumes on Tuesday, the same day as the federal budget. 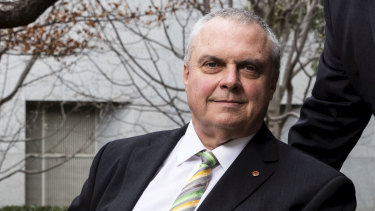 Centre Alliance Senator Stirling Griff says he will finalise his position on the government’s university funding reforms in the coming days.Credit:Dominic Lorrimer

The outcome of the bill hinges on the vote of Centre Alliance senator Stirling Griff, from South Australia, who said on Friday the party was still in discussions with the state's universities and the government.

"We're continuing to work with our local unis and discuss ways to improve the offerings for students," Senator Griff said.

"It's fair to say that engagement with all – including the government – has been positive so far, but it will still be some days before we arrive at a position."

The government needs three crossbench votes to secure the bill's passage. It has locked in One Nation's two votes, but will need Senator Griff's support after independent senator Jacqui Lambie declared her opposition this week, saying the reforms would make "university life harder for poor kids and poor parents".

The bill proposes a major restructuring of university funding by hiking fees for some courses, including by 113 per cent for humanities, to pay for fee cuts for STEM, nursing and teaching courses. The government says the reforms will create 30,000 new places next year, and as many as 100,000 places by 2030.

Centre Alliance is demanding more funding for student places at South Australia's three universities as a condition of its support, but has not publicly revealed its other demands.

Mayo MP Rebekha Sharkie, who is leading the minor party's negotiations with the government, said earlier this week the additional places would be "a real game changer" but "would not be the only factor that would determine our vote."

Education Minister Dan Tehan has declined to comment directly on the negotiations, saying only that he looked forward to "continuing to work with the crossbench to secure the passage of the legislation".

Labor and the Greens both oppose the bill.

"They should rule out their support before Parliament resumes," Senator Hanson-Young said.

One Nation has agreed to support it on the condition the government amends the bill to legislate a definition of academic freedom, and reinstates a 10 per cent discount for students who pay their fees upfront, and reinstates a seven-year limit for full-time students to receive HECS-HELP before they have to pay full fees.

The most important news, analysis and insights delivered to your inbox at the start and end of each day. Sign up to The Sydney Morning Herald’s newsletter here and The Age’s newsletter here.