Earlier this week the former governor of the Reserve Bank of Australia, Ian Macfarlane, said that young Australians should be “squealing louder” about the level of intergenerational wealth inequality in this country, which he said was fuelled largely by skyrocketing house prices.

Macfarlane’s thesis is that the original sin of the current housing boom – generous tax incentives including negative gearing and capital gains tax discounts – have made property investment an extremely attractive proposition for wealthier Australians, and that in turn has driven house prices through the roof. Housing has transformed from a basic human necessity into an asset class largely disconnected from the physical function it performs: providing shelter, and that’s helped increase the wealth of those who already had some to begin with. 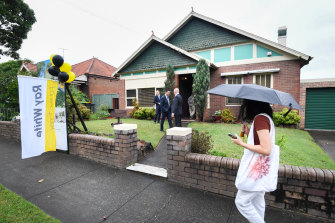 Generous incentives have made property investment an attractive proposition for wealthier Australians.Credit:Peter Rae

The main beneficiaries of this transformation have been older Australians who are more likely to own property, while those missing out tend to be younger. According to housing occupancy figures from the Australian Bureau of Statistics based on data from its survey of income and housing conducted from July 2017 to June 2018, 37 per cent of 25 to 34-year-olds are home owners, compared to 78 per cent of 55 to 64-year-olds. That’s down from 50 per cent in 1971. Among 50 to 54-year-olds, on the other hand, the drop has been less dramatic and from a much higher base.

While the rise in house prices has impacted homeownership rates across the board, there is a significant demographic divergence that backs up the former RBA governor’s analysis. Where Macfarlane misses the mark, though, is his suggestion that young Australians should speak out more. The problem isn’t a lack of agitation from those locked out of the system – there are few topics that spark more heated conversation among young people than the current combination of an increasingly precarious labour market and a property boom that has left them behind. 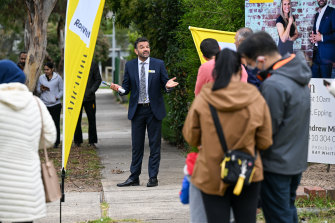 Thirty seven per cent of 25 to 34-year-olds are home owners, compared to 78 per cent of 55-64 year olds.Credit:Photo: Joe Armao

The real issue is that it doesn’t matter how loudly young people “squeal”. Our current policy settings have created a large and powerful constituency who view rising house prices as synonymous with their personal wealth, and will fight tooth and nail against any change. It’s a political conundrum that no one seems able, or even willing, to solve.

Politicians claim to decry the fact that it’s harder for young people to buy a house, but they have no genuine desire to lower prices because that would deflate the wealth of a much larger number of people – people they need to vote for them. And as tempting as it is to write off this entire group as selfish and greedy, what makes things more complicated is that those lucky enough to be able to buy property during this current boom have acted entirely rationally. Our current policy framework, particularly generous tax discounts and record low-interest rates, means that putting your savings (if you have them) into housing is the best bet you can make.

And even if you’re furious at those who are hoarding investment properties, once you eventually manage to scrounge up enough cash for a deposit and buy your way in, you then have a personal financial interest in keeping prices going up, making it all the harder for those a couple of steps behind you. 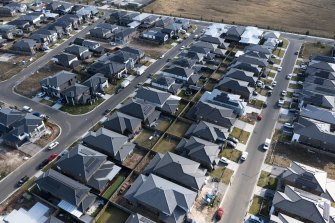 Rising house prices are considered synonymous with personal wealth by a large and growing constituency.Credit:Rhett Wyman

So reliant are so many Australians on ever-increasing house prices that even a pandemic that paused immigration and froze the economy couldn’t get in the way of the boom. Between 2020 and 2021 house prices in Australia rose by 16.4 per cent. According to a new paper published by the Institute of Public Policy Research looking at Australia’s housing market, this is because “the value of housing assets is underwritten by governments”. In other words, Australia’s $9 trillion housing market is too big to fail.

It’s a phenomenon the researchers who wrote the paper acknowledge is occurring across advanced capitalist economies. As wages have stagnated, governments have increasingly turned to housing to pump up the wealth of voters. The key difference here is that wage growth benefits all workers, while increases to house prices only benefit those who can afford to buy a home.

So will anyone fix it? It seems unlikely that any potential future prime minister will have the courage to face an electorate where two-thirds of people not only own a home, but see property investment as their primary way to generate more wealth, and announce a plan that would lower prices.

Labor jettisoning their proposed modest reforms to negative gearing and capital gains tax concessions looks like evidence of that. Instead, the Opposition has proposed a policy that helps people “buy in” to a housing market that continues to spiral upwards. It might help the 10,000 buyers the policy has been costed to support, but what about the hundreds of thousands who remain locked out. Are they just consigned to falling further out of reach? The Coalition’s Home Guarantee scheme is similar. It makes it easier for people to buy into the market by lowering the required deposit, but like Labor’s it seems explicitly designed to avoid any kind of price correction.

The other solution might just be time. If current trends continue it’s possible that more and more wealth ends up concentrated in fewer and fewer hands, until the size of the constituency made up of those locked out of the housing market is big enough to finally force radical policy change.

Osman Faruqi is culture news editor for The Age and The Sydney Morning Herald. He stood as a candidate for the Greens in the 2015 NSW state election. He is not a member of any political party.

Cut through the noise of the federal election campaign with news, views and expert analysis from Jacqueline Maley. Sign up to our Australia Votes 2022 newsletter here.