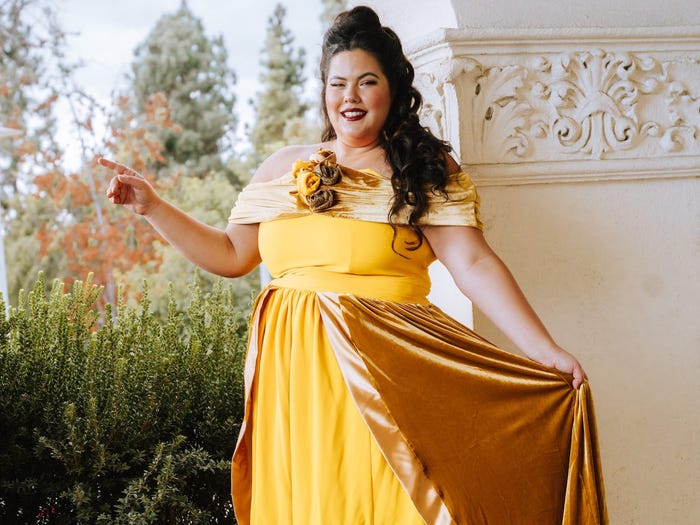 Disney princesses have been inspiring children for decades — but some fans argue that they don't represent everyone.

That's why influencer Natasha Polis created the Plus-Size Princess Project. Over the course of three months, she gathered a group of plus-size influencers to create a photo series that shows women with larger bodies portraying classic princesses. She also made sure to include non-princess characters to ensure she could work with a diverse cast.

Speaking to Insider, Polis shared what it was like to work on the project, the obstacles they faced, and what she hopes people take away from the photos. 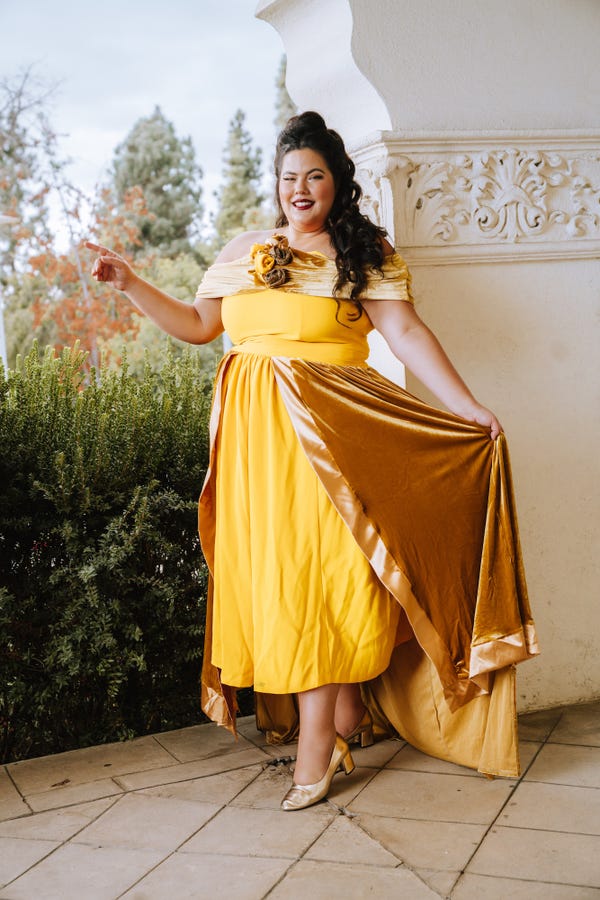 Speaking to Insider, Polis said Disney became "embedded" into her life while growing up in Orange County and frequenting Disneyland. Now, she works as an influencer who often makes fashion and Disney-themed content for more than 77,000 followers on Instagram.

"I love to emphasize plus-size fashion and show characters in larger bodies," Polis said. "I really wanted to create a project that would show people that we want inclusivity and diversity in our Disney princesses, and that we can do it — regardless of body shape, size, skin color, or background."

The first person Polis contacted was Hunter McGrady — a model known for her appearances in Sports Illustrated and The Knot. 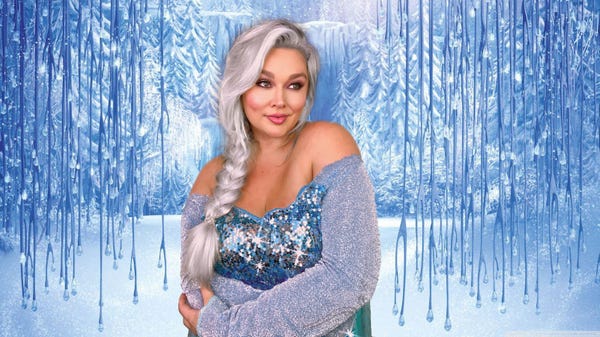 Polis said she "was pumped" as soon as Hunter agreed to participate and pose as Elsa from "Frozen."

"How amazing would it have been to see a plus-size princess growing up?" Hunter wrote on Instagram. "It's incredible how much is ingrained in us at such a young age."

"The princesses I grew up seeing were all thin and white and for the most part saved by a man," she continued. "I hope we continue to see growth in this area so that one day when I have children no matter their size, they see representation."

Other women featured in the Plus-Size Princess Project are fashion and Disney influencers. 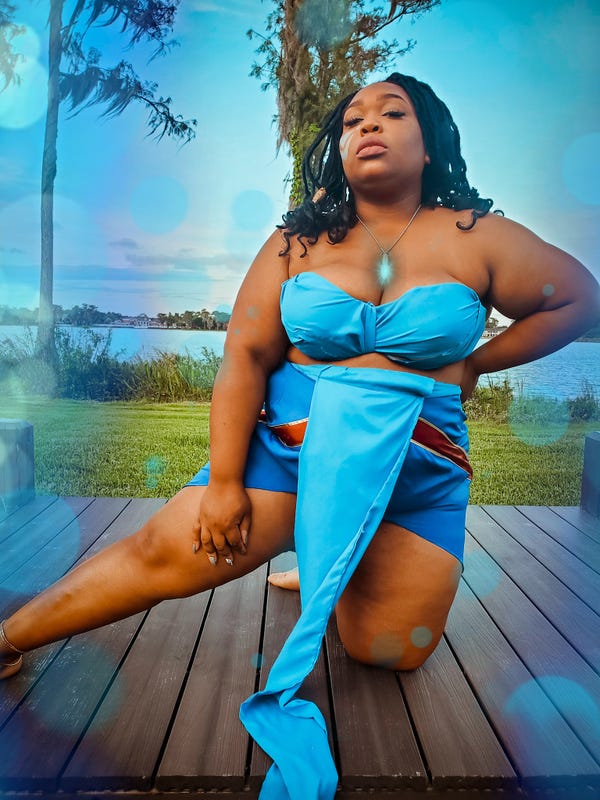 Instead of asking influencers to dress only as Disney princesses like Snow White and Cinderella, Polis decided to feature a wide range of the company's female characters so that she could work with a more diverse cast.

One of those characters is Kida from "Atlantis," portrayed in the Plus-Size Princess Project by Adriana of @bibbidibobbidi_broke.

"Kida was always one of my favorite characters," the influencer wrote on Instagram. "Before we had a Black princess, we only had brown (Pocahontas, Jasmine, Mulan) or racially-ambiguous ones like Kida. Kida's race has always been up for debate, but seeing that Cree Summer plays her voice, I think you know what I think she is!"

Polis originally wanted costumes to look as accurate as possible. 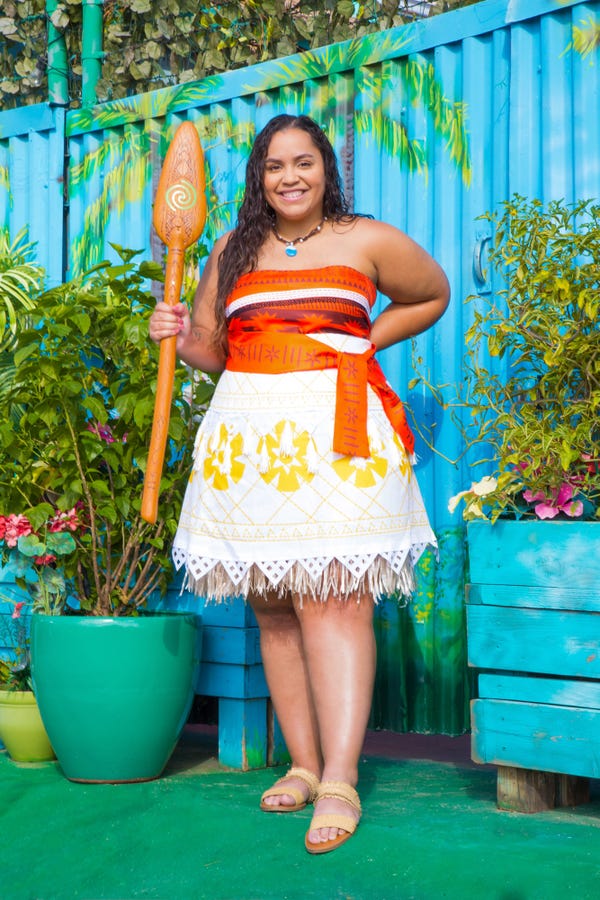 "I started reaching out to people in August because I wanted them to have time to make or buy their own costumes," Polis said. "I laid out these guidelines for them and said, 'We want this to be as accurate as possible. If you need my help finding costumes, reach out to me."

One person who looked identical to her character is Zoie of @curvesbyzo_, who dressed as Moana. 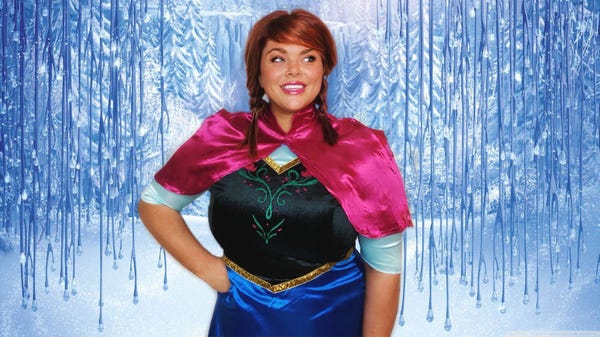 McGrady (@michaelamcgrady) looked just like Anna from "Frozen" with braided red hair and a pink cape.

"Growing up with Disney so near and dear to my heart, I know how life-changing it would have been for all of us to see princesses of different sizes, shapes, and skin tones grace the screen," she wrote on Instagram. "Anna has always been one of my all-time favorite princesses (Queen!) and I had such a blast recreating this with my sissy @huntermcgrady."

Unfortunately, some influencers had difficulty finding accurate costumes in their sizes. 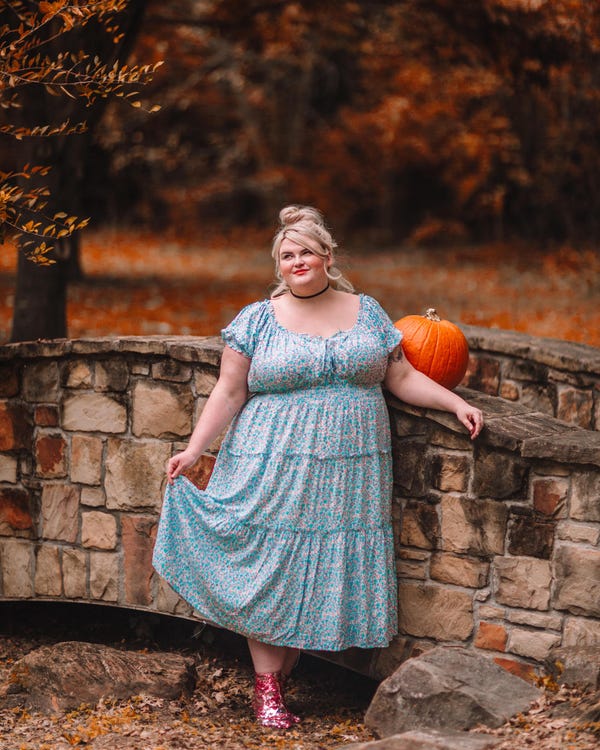 "I think a lot of girls were thinking it was going to be easy to find a costume, but with my experience as a plus-size person, trying to find princess dresses in my size that don't look cheap and not cute, it's a difficult search," Polis said.

"It ended up being that people were choosing costumes or outfits based on their own style instead of being accurate," she continued, adding that many women decided to DisneyBound, or dress in an everyday outfit that channels the essence of a Disney character.

Rosey Blair, who goes by @roseybeeme on Instagram, did so when she wore a blue, printed sundress to pose as Cinderella. She also wore her hair in the princess' signature style, and donned a black choker necklace.

One influencer even decided to exit the project because she couldn't find a costume that worked for her body. 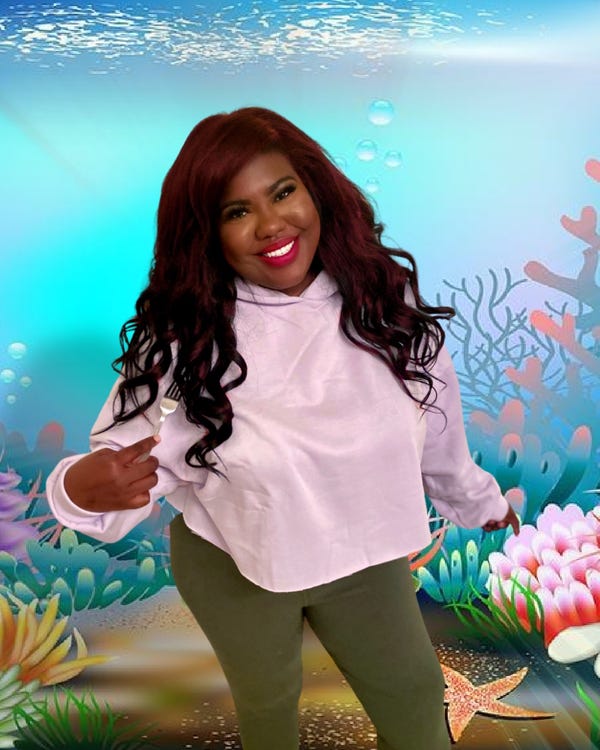 An influencer who was set to pose as Ariel exited the project because "she was so frustrated" that her outfit didn't fit, according to Polis.

"I know that feeling so well, and I was like, 'I'm so sorry,'" Polis said. "I wish I could've helped her earlier and found something that worked for her and her body. So there were a lot of emotions and frustrations."

Luckily, Becca Ashmon (@beccaashmon) stepped in to pose as the mermaid-princess. She wore a DisneyBound athleisure outfit for the photo, and said on Instagram that she's passionate about the character because "racism JUMPED out" when Halle Bailey was cast as Ariel in an upcoming live-action film.

"They said a half-fish half-woman couldn't be black 🥴," the influencer wrote on Instagram. "So please catch me in my fantasy! 👩🏾‍🦰🧜🏾‍♀️🐬"

Others got creative with costumes they could find in smaller sizes. 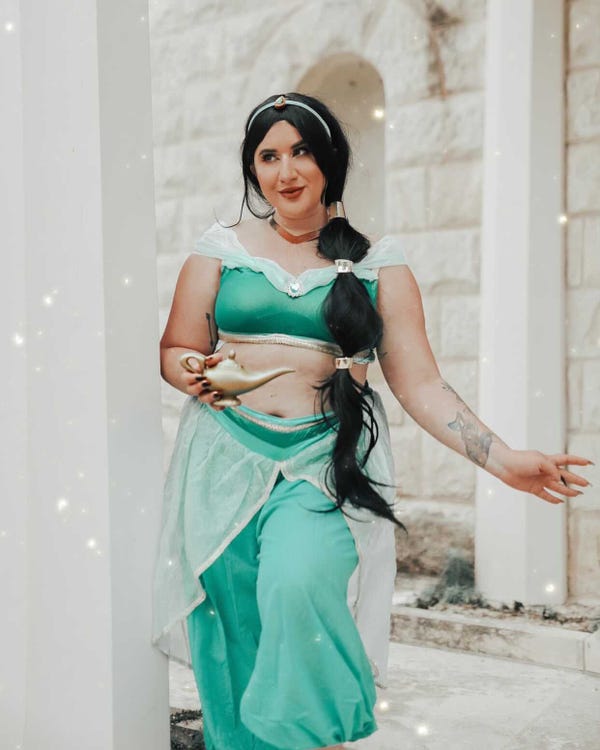 Bonnie Barton (@flashesofstyle) — who posed as Jasmine for the Plus-Size Princess Project —actually wore a two-piece ensemble that was too small for her, according to Polis.

"She found an outfit in Party City, but it was way too tight and she ended up cutting the back of it and just getting the shot from the front," Polis said.

Ideally, Polis would have sewed a costume for every influencer involved. 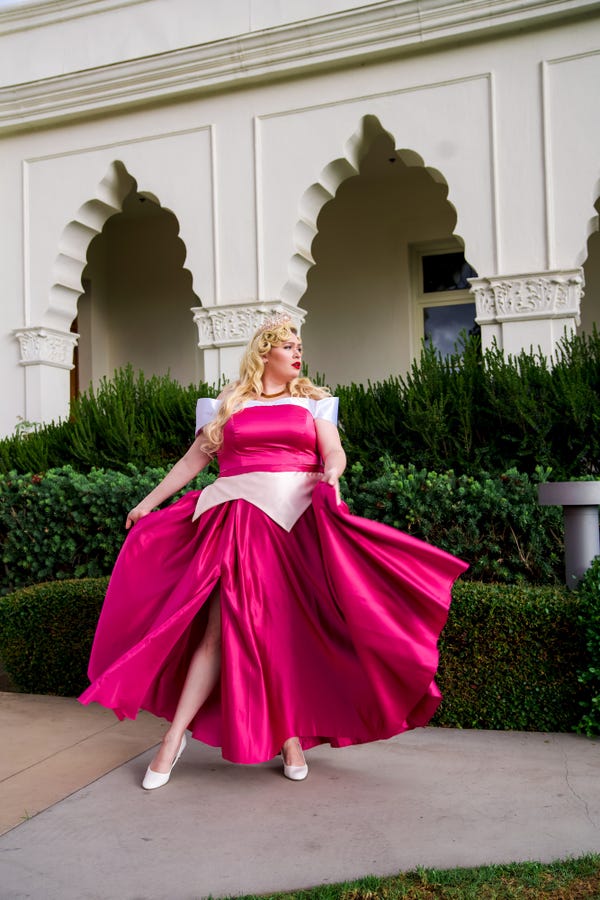 Polis told Insider that she "wishes" she could have sewn "every single gown." Still, she was able to create at least two: her Belle costume, and Aurora's pink dress from "Sleeping Beauty." Influencer Heather Traska (@heathertraska) posed as the princess for the project.

"Growing up, I always dreamed of being a princess, but was quickly taught by society that princesses didn't come in my size," Traska wrote on Instagram. "Simply put, I refuse to subscribe to those limitations anymore. 👊🏼👑"

But because influencers were able to put together their own outfits, their personalities shined through. 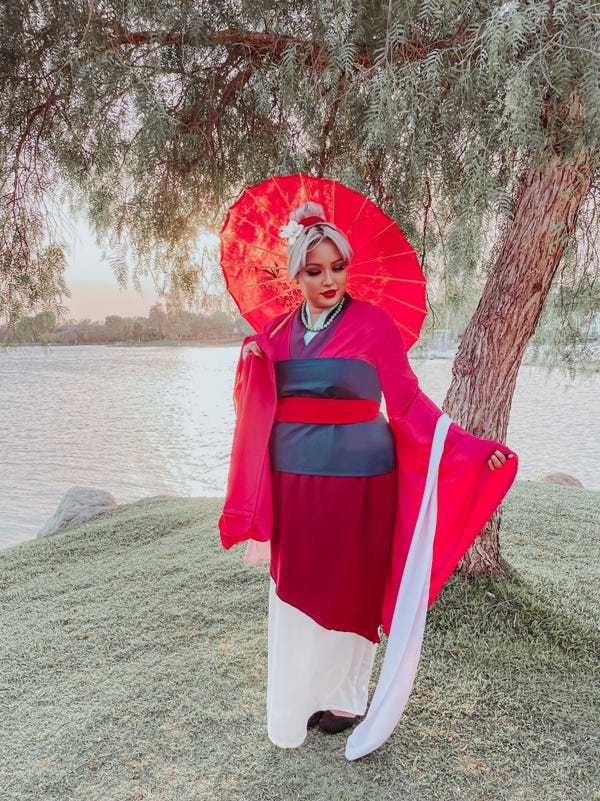 "I was so obsessed with our Mulan," Polis said. "She sewed that entire look and it turned out beautiful. A lot of people were asking, 'Should I put a wig on?' And I was like, 'No, I just want it to be you. Just wear your hair — even if it's pink. We love that and we want you.'"

Marie Tran (@magicandmarie), who posed as Mulan with pink hair, said on Instagram that she made the costume "entirely from scratch" for less than $40. She chose to make the outfit because plus-size costumes she found online "only went up to size XL and were over $150."

Their DIY looks also show how accurate costumes can be created on a budget. 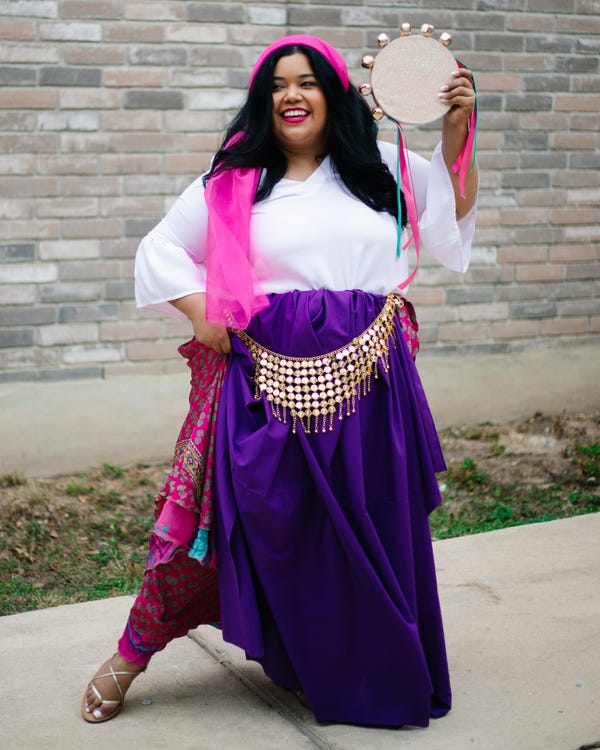 Candice, who goes by @smilesandpearlss online, said in an Instagram post that she created her Esmerelda-inspired look for less than $25.

"I had the sandals, skirt, and top already, so the accents with the help of a little crafting came together so well!" she wrote. "My tambourine is made out of foam and the purple overlay is just two yards of draped purple fabric!"

There is one Disney princess missing from the project that Polis really wanted to include. 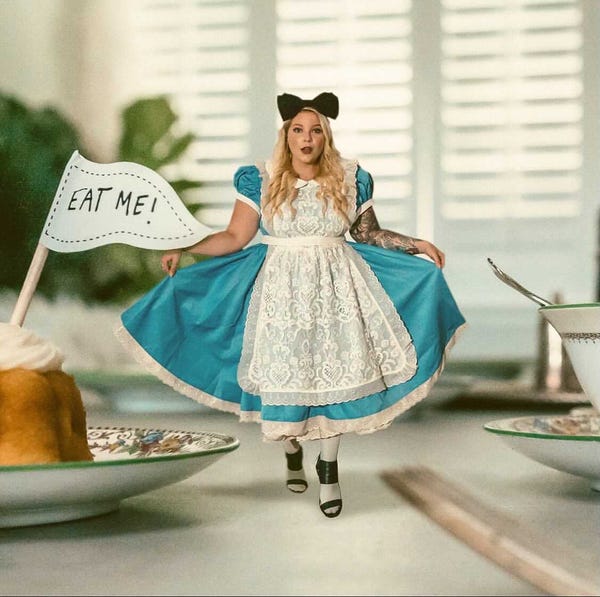 "I kept trying to cast Giselle from 'Enchanted' and people kept saying no," Polis laughed.

Still, it might have worked out for the best. According to the influencer, participants like Ashlee Rose Hartley (@ashleerosehartley) encouraged her to include characters she had completely forgotten about, including Alice from "Alice in Wonderland."

Mary Poppins is the only character from a live-action film to be included in the project. 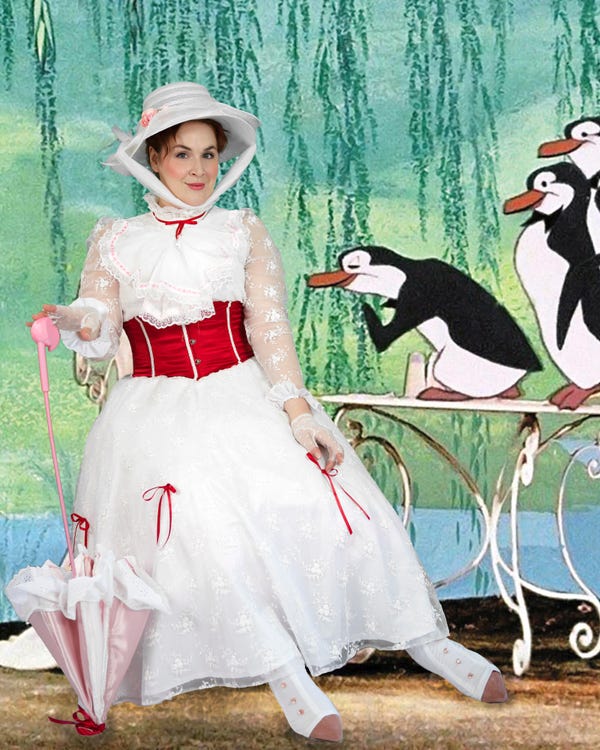 The character was portrayed by Elle Valera, an influencer and opera singer who goes by @ellevalera online.

"Now as a vocal teacher, I continue to see how Disney impacts children: a 9-year-old student in class recently looked at her body disapprovingly and said, 'I probably will only play Ursala onstage — never Ariel because I don't look like a princess,'" she continued.

Valera went on to say that all children "deserve to see themselves" in films and characters.

"Let's hope one day @disney finally sees these little girls, and us," she said.

Polis said reactions to the Plus-Size Princess Project have been "extremely positive" so far. 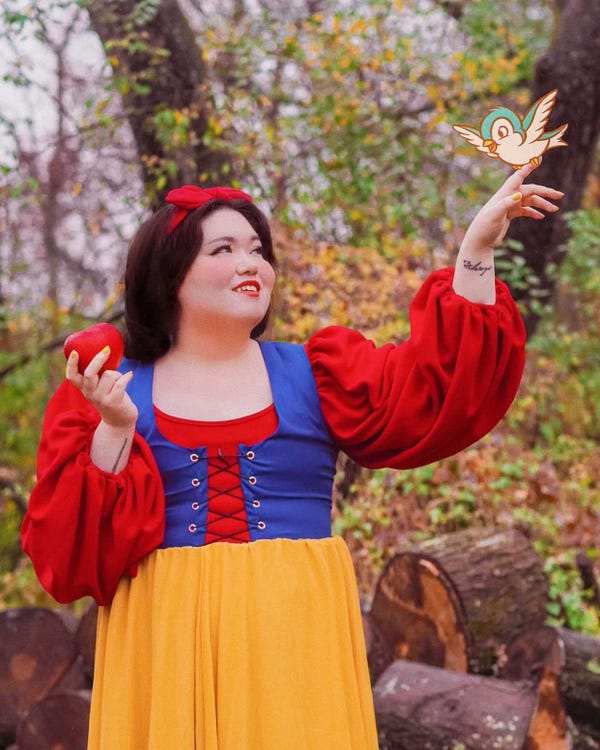 "My favorite thing is when I get comments saying 'I found so many new plus-size influencers to follow,'" Polis said. "So it's been super exciting to see that."

One of those influencers is Monica Kim (@monicakim.jpg”>Snow White for the project.

"I feel like a lot of people were looking for this type of thing, and I'd like to do it again in the future, maybe with a different set of characters," Polis continued. "It's just been so fun and positive to see everyone's responses to it, and their excitement and joy."

Disney princesses have come a long way in recent years. 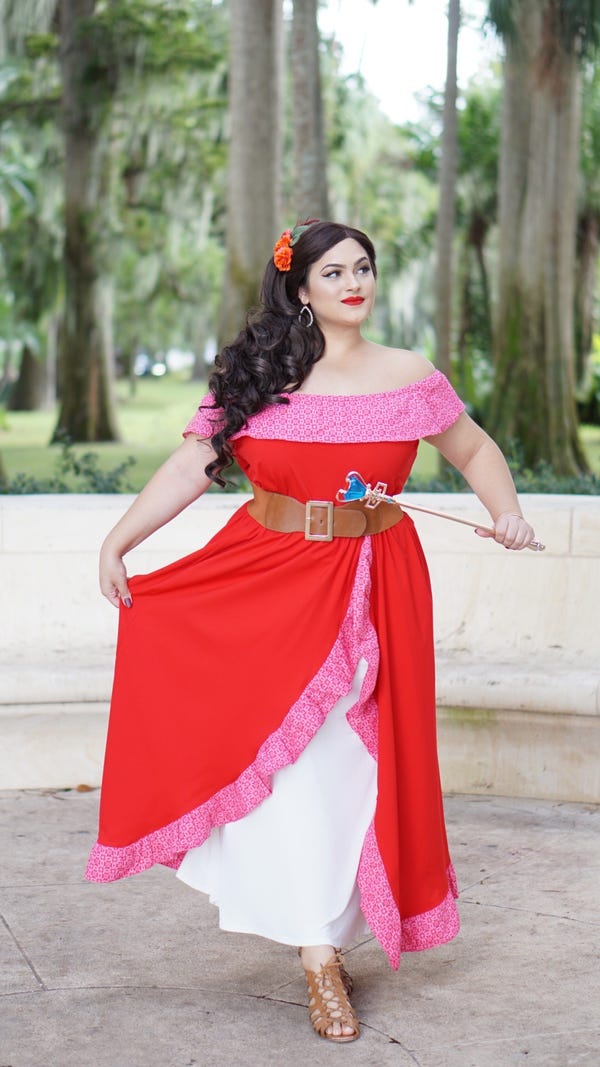 Look no further than Princess Elena of Avalor, portrayed in the Plus-Size Princess Project by Stephanie of @madebymagic_designs.

"Growing up, I had a few POC characters I could see myself in," Stephanie wrote on Instagram. "But other than appearance, the cultural connection wasn't there. Although Elena wasn't around for me as a kid, I'm so happy she is around for my future kids! Representation matters!! 💃🏽 🇨🇺🇵🇷"

Still, Polis argues that companies like Disney still have a long way to go. 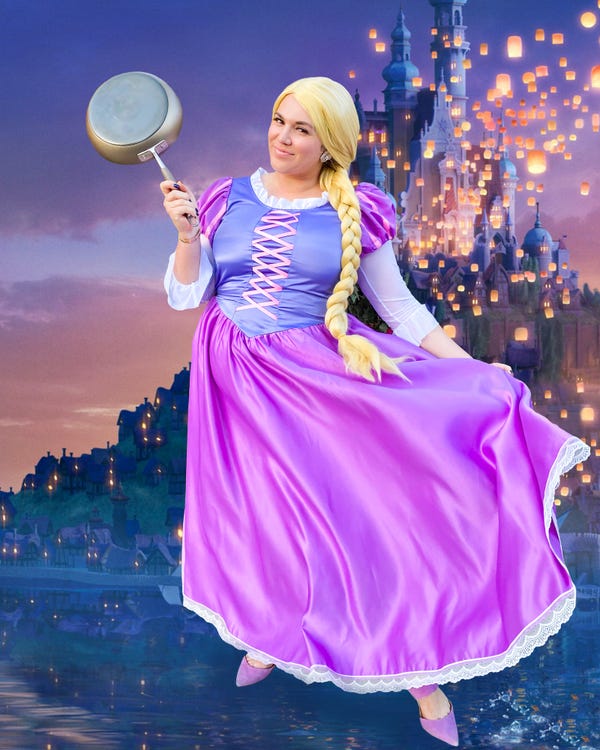 "I think we call for inclusivity in our media, but we're not there yet, I don't think, at all," Polis said.

Sarah Tripp (@sassyredlipstick), who posed as Rapunzel for the series, wrote on Instagram that while the project "was so fun" and "meaningful" to work on, she couldn't' help but "imagine seeing this representation as a little girl."

After seeing the Plus-Size Princess Project, Polis hopes people realize that "princesses are not a one-size-fits-all." 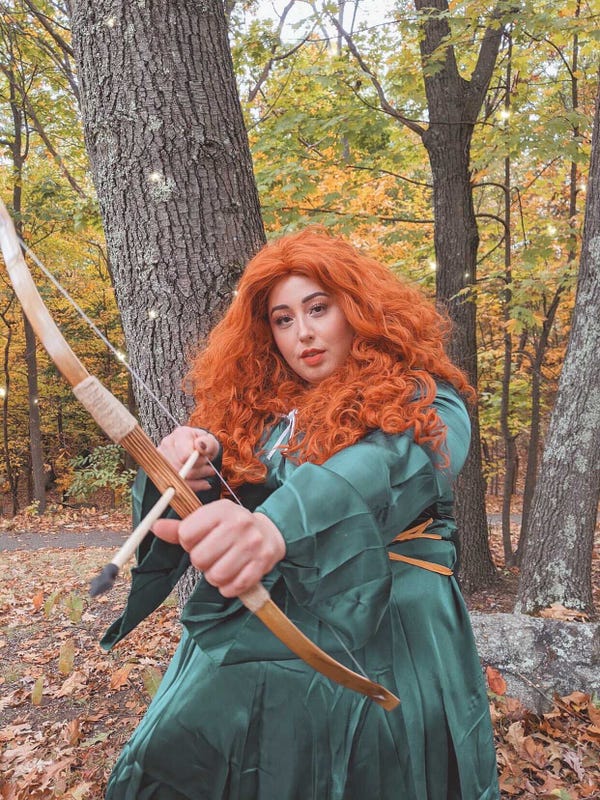 Ultimately, she hopes that people can either relate to the photos and see their favorite princesses "in larger bodies," or start to accept natural differences in others.

"I think if you follow certain people online, and if you see them in your life all the time, it'll help you to accept who you are and your body," Polish said.

Pictured above is Sarah Anne (@tonsablush) dressed as Merida from "Brave." 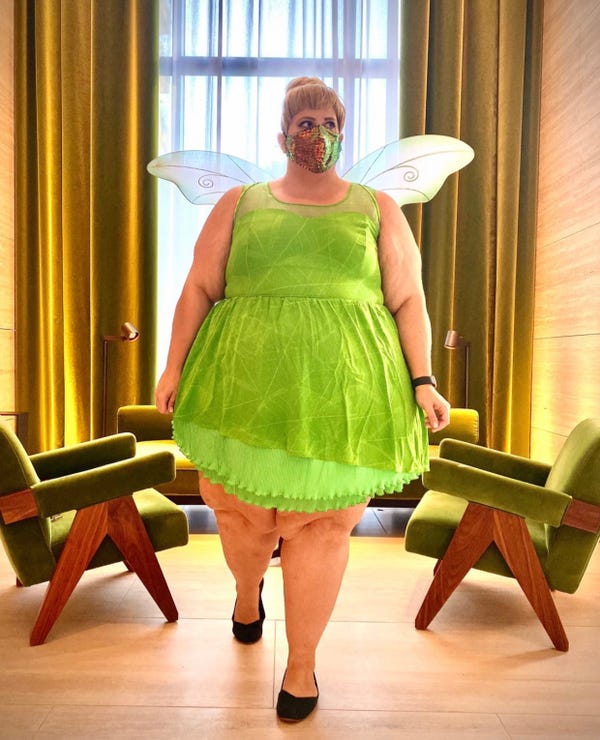 "We just like to push those drawn-on lines of beauty standards to get people thinking and changing their minds," she said. "I think it's an important first step to start online with influencers who have thousands and thousands of followers."

Pictured above is Anna OBrien (@glitterandlazers) dressed as Tinker Bell from "Peter Pan."