When I was asked to sit for a portrait I was thrilled – it felt like an honour. These days, it’s pretty much the domain of the famous or artists themselves and in Australia portaiture is largely only in focus when the Archibald Prize rolls around each year. The genre is not particularly fashionable, pushed aside when photography took over the role of documenting our lives, give or take a prime minister or two. 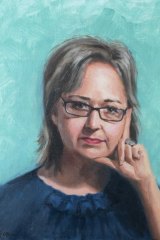 The request came from my cousin, artist Fiona O’Byrne, a specialist in traditional portraiture and still life. She has painted actor Nadine Garner and city architect Rob Adams, as well as friends, family and fellow artists; her depiction of her husband Steve Frazzetto won the Norma Bull Portraiture Prize in 2015.

A landscape architect by profession, she has studied at the Victorian Society of Artists since she started painting classes at the relatively late age of 36.

A few days after Fiona raised the idea, I started feeling nervous. What would I look like? Would it be a kind image, like those by John Longstaff, five time Archibald winner and popular in Australia in the 1920s and 30s, in part commissioned for his favourable representations, glossing over extra chins and erasing wrinkles.

Or would it be warts and all, my big teeth and forehead writ large? (Memories of caricatures drawn of me at conferences a lifetime ago came to mind – I’d hated them.) 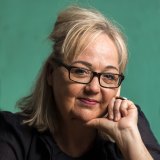 Given it was a live sitting, I wondered if we would chat, or would that be too distracting for her. How long could I stop myself speaking? (There was a cue as to when not to talk, “I’m working on your mouth now, Kez”, roughly translated as “Keep your mouth shut”.)

Could I hold a pose for an extended period of time? Apparently few live-sitting portraits are painted with people smiling because it’s tricky to hold a smile. Fiona opted to have me lean on my hand, which felt natural, after she asked me to find a comfortable position. It was a brave move – hands are notoriously difficult for artists to capture.

As it turned out, we talked a lot over the four sessions, each averaging about two hours; it was a wonderful bonding experience. It developed a particular trust between us too – you reveal something of yourself through the sitting process in a way I only fully realised once the painting was complete.

Fiona starts with tonal renderings, building a likeness before adding colour. Over the course of a month, I saw the work evolve, taking shape each session like a mirage outline becoming more and more solid. 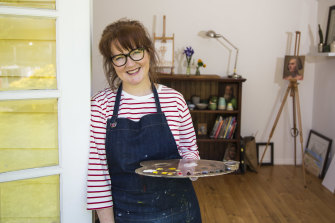 At one stage I showed a friend the work in progress and she laughed, saying I looked about 105 – not exactly the response I’d hoped for. Would the end piece be the opposite of Dorian Gray’s and show me forever old beyond my years?

There are nods to my interests in the work: the turquoise of the background reflecting my love for the ocean, my ring illustrating my passion for jewellery.

Even the pose itself, of me thinking, gives a clue to my line of work. But it’s the portrayal she has created of me that gives the most insight.

Fiona captured a remarkable likeness and, as with the best portraits, she has captured something of my internal self. The finished piece reveals me lost in my thoughts, looking pensive; it’s like she draws a line to my private, inner world. It really is a treasure: a moment in time recorded forever.

The ultimate revelation for me was how privileged I was to watch an artist at work, up close and personal.