On the subject of player welfare in the NRL, I am sorry to report they still don’t get it when it comes to concussion. In that game between the Eels and Storm on Thursday night, the “tackle” by the Storm’s Felise Kaufusi on Parramatta’s Ryan Matterson was extraordinary. Matterson had already been substantially brought down when Kaufusi, landing on him, came down with his elbow swinging. That elbow crashed into the side of Matterson’s melon, which in turn hit the ground and the Eel was not only taken from the field, but was clearly in the middle of next week. 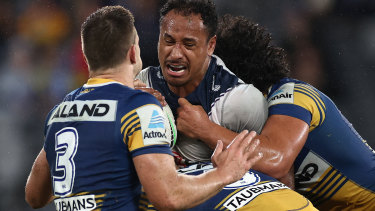 Felise Kaufusi did not receive his marching orders against the Eels…Credit:Getty

So, for something like that, at a time when the NRL has promised to be tougher than ever on foul play causing concussion, what do you think might be the appropriate penalty for Kaufusi?

I am going to go with “OFF!” followed by a lengthy suspension.

Seriously, in the NFL, which is further down the track than the NRL in the legal ramifications of foul play causing concussion, touching the head of an opposing player is strictly verboten, and the NFL doesn’t care if it was an accident: no head contact!

In this case, you had a swinging elbow causing concussion, and the penalty?

But otherwise … PLAY ON! 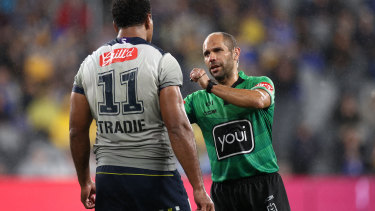 He was only put on report by Referee Ashley Klein.Credit:Getty

Yup, Kaufusi has subsequently been charged with a grade-two dangerous tackle, and will likely be suspended for his trouble, but just what does it take to get sent from the field in an NRL match these days. If a swinging elbow to an opponent’s head, causing him to taken from the field, ga-ga, doesn’t cut it, what does it take?

Sleeping through the America’s Cup

Back in 1983 when Australia won the America’s Cup, it was – I kid you not – pretty much the most exciting moment in Australian sporting history. Americans of a certain age remember where they were when they heard that President Kennedy was shot. For us of a certain age, it was where were you when Australia II took the lead in the final race. About to cross the bridge, when Ron Casey broke into an advertisement to say, “Australia II has taken the lead – you beauty!” 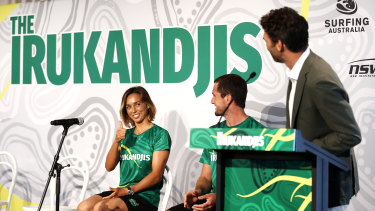 Sally Fitzgibbon is introduced during a naming event for Team Australia Surfing.Credit:Getty

Walker was one of a kind

Murray Walker? Look, he wasn’t Denis Cometti in terms of the finely calibrated cleverness of his commentary over the decades, but he was certainly widely and deeply loved like Cometti for his quotes and was, in the words of one of his Australian twitterati fans, “to F1 & motor sport commentary what Richie Benaud was to cricket, [while] Clive James described his style as ‘pants on fire commentary’.” You get the drift. Now, in the wake of his death this week, many of his classic comments – most of them up the Rex Mossop end of the spectrum – have been circulating. Here is a quick burst:

“There’s nothing wrong with the car except that it’s on fire.”

“And the first five places are filled with five different cars.“

“It would have been Senna’s third win in a row if he’d won the two before.” 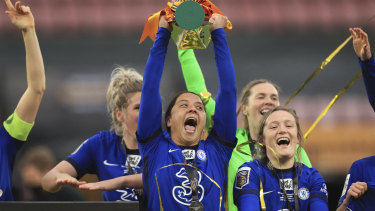 AFL. Bounces off this weekend

Russell Okung. The Carolina Panther had his salary paid in bitcoin, pushing the value of a $13 million deal to more than $21million.

Cristiano Ronaldo. Overtook Pele to score the most goals in official matches ever.

British Cycling. Revelations continue to seep out about doping in British Cycling. Prima facie, having never won more than five gold medals in cycling at a single Olympics, between 1908 and 2008, before in the next three Olympics proceeding to win a total of 22 gold medals, it does look a bit suss!