Flintoff cheered as I fell backwards with an almighty crash

I’ve been called a lot of things during this pandemic for the way I’ve interrogated Government Ministers on Good Morning Britain, many of them uncomplimentary.

But the grillings have gone down well with the French, whose prestigious newspaper Le Monde profiled me this week and declared: ‘Piers Morgan has abundant hair, lively eyes, he is a tough talker and isn’t scared of a shouting match on air. More than a pugnacious political journalist, he is a real pit bull.’ 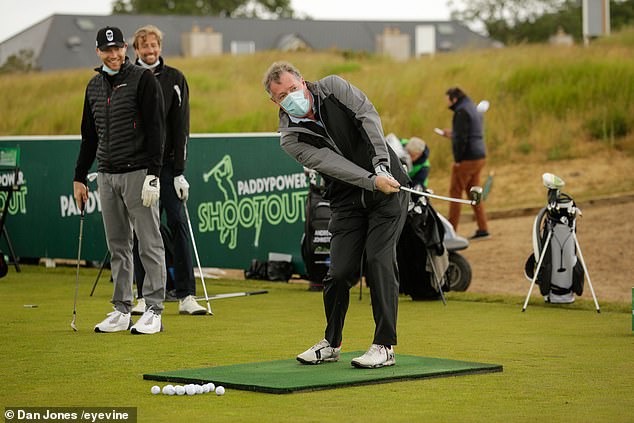 Piers tees off as Freddie Flintoff and Peter Crouch look on. Piers writes: ‘Despite the bruises, it was a great day’

My joy at this glorious description was only matched by receipt of a tweet from Boy George saying: ‘Your official new drag name is Fierce Morgans!’

There was a Twitter poll to see which pro got me as a partner.

The answer was Fleetwood, currently ranked No 10 in the world, one ahead of Tiger Woods.

‘Many thanks Twitter World,’ he responded, with a spray of eye-rolling emojis.

‘I’m sorry Tommy,’ responded Beef, who played a pro-am round with me last year, ‘being paired with Piers Morgan is gonna be a loooong day.’

Tommy WhatsApped me: ‘Bring your A game and be nicer to me than some of the GMB guests.’

‘We’re team-mates, relax,’ I replied. ‘It’s the others who need to start panicking.’

Things didn’t start well when I was stopped for speeding a mile from the club. It was a fair cop – I did toy with pulling a Dominic Cummings-style ‘I was only testing my eyesight’ excuse, but thought better of it.

On arrival, I was given a Covid-19 test before meeting the others.

As we stood on the first tee, preparing to chip balls into some buckets, I ratcheted up the sledging until Bjorn eventually exclaimed: ‘This is the point I normally turn him off in the mornings…’

Amusingly, I was the only one to get a ball into the maximum points white bucket, so Tommy and I went one up.

‘Nice one, partner!’ he laughed.

‘I haven’t come here to lose,’ I replied.

When we got to a 30ft blindfolded putting challenge, Tommy casually told me: ‘I once played an entire US Open with my eyes shut on every putt under 10ft.’

‘Hahaha, no, I found it helped me focus. Worked pretty well, I came 27th!’

He hit his blindfolded putt to 6ft from the hole. Then I hit mine to 5ft.

‘Do you have the qualifying forms for the US Open?’ I chortled.

The next ‘Golfing Goals’ challenge involved hitting balls 170yds into a netted football goal. ‘No pressure, Jamie,’ I mocked Redknapp, who rates himself as a golfer, ‘but if I score more goals than you… well, you can imagine.’

Redknapp failed with his three attempts.

I then strolled up, smashed my first shot straight into the middle of the goal, and stood milking presenter Georgie Bingham’s ‘Morgan’s only gone and done it!’ commentary like Cristiano Ronaldo.

Redknapp’s hell continued when I also won the next challenge, nearest the pin on a 120yd hole with children’s sized clubs.

Then came my personal nemesis – a ‘Race Against Time’ challenge where we had to complete a 450yd hole as fast as possible. This involved me sprinting further than I’ve done in 25 years, reducing me to a beetroot-faced, panting, sweating hot mess.

‘You still alive?’ asked Tommy, laughing his head off.

(I later discovered the organisers had to take out extra insurance in case I did actually die on that challenge.)

‘Yes,’ I gasped, ‘though it’s been exhausting carrying you for two hours.’

We won the tournament.

As we celebrated, Spurs manager José Mourinho appeared with his and England’s captain Harry Kane.

‘Congratulations,’ Jose smiled, ‘and well done also on the way you’ve been going after the politicians. It’s been good to watch, and it needs to be done. Keep going!’

Mourinho clenched his fist approvingly, and in that moment, I glimpsed the brilliant man-management style that’s made him one of the world’s greatest football bosses.

Kane wasn’t quite so thrilled.

‘Pleased to see an Arsenal fan walk away with the silverware?’ I asked. ‘It’s been a while since you’ve had any…’

‘I’m disappointed the lads let you come away with a victory,’ he sighed.

The afternoon sideshow was an individual one-hole 150yd Par-3 shoot-out, and I spent most of it taunting my rivals – especially Freddie.

‘OOPS!’ I shouted as he smacked one into the trees.

‘TIMBERRRR,’ I guffawed as he launched another one even deeper into woodland.

‘TAXI FOR FLINTOFF!’ I mocked as his third one limped way short.

Freddie’s misery was compounded when I arrowed my first shot to within 3ft of the hole. Feeling quite stupendously smug, I returned to my chair, perched rather perilously on a slight slope, lent back, and suddenly felt myself falling backwards.

At 55, and not exactly size zero, there is a certain unstoppable momentum to such a moment, and I tumbled painfully backwards on to the rough terrain with an almighty crash.

Flintoff instantly sprang out of his own chair and set off on a wild cackling charge past me screaming ‘YEESSSSSS!!!!!!!’ as if he’d just taken a hat-trick at Lord’s in an Ashes Test match.

‘We’d got a man overboard…’ pronounced Georgie solemnly, ‘… and a Freddie Flintoff celebration.’

Despite the bruises, it was a great day.

As Freddie said when we wandered back to the clubhouse at the end: ‘Just nice to be out having a laugh again with some mates, isn’t it?’