Parents say they find the search for the right kind of childcare overwhelming, confusing and worrying – and that’s before they get to paying for it.

Nearly one in three families surveyed by education advocates The Front Project were using more than one type of care, cobbling together daycare or nannies and grandparents, and many said their choices were constrained by price and availability. 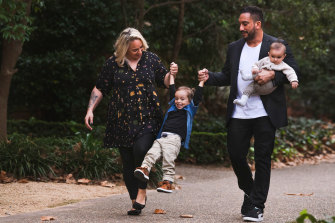 Leah and David Pereira, pictured with their sons Noah, 3, and baby Roman, say cost is a major barrier to them being able to use as much childcare as they would like.Credit:James Brickwood

Grandparents aren’t an option for David and Leah Pereira.

Their extended family is overseas so the St Leonard’s couple relies heavily on their childcare centre.

Mr Pereira said they would like their three-year-old son Noah to spend more time in daycare, but can’t afford more than three days a week.

“It’s financially hard because we’ve got a newborn and my wife’s at home so there’s only one wage coming in,” he said.

“But even on the cost, we do see a huge amount of value in early education, particularly from my experience and Leah’s experience of not having that and feeling that we were on the back foot when we started in primary school.”

They chose the centre Noah attends as a compromise between cost, location and quality, with others closer to their home having higher fees.

The Front Project’s research found more than two in five families said they had been forced to change their work arrangements to fit around the childcare they could find or afford.

Parents highlighted the need for more transparency around care options – childcare, family day care, preschool or nannies – what each involved and how much they cost.

New data from the Australian Institute of Family Studies also found that since the lockdowns of 2020 there has been a 25-percentage-point increase in working from home, with 67 per cent of respondents working at home some or all of the time at the end of last year compared with 42 per cent pre-pandemic.

Of the more than 3600 people surveyed in November and December last year 29 per cent were always working at home, compared with 7 per cent at the start of 2020.

Lead researcher on the study Jennifer Baxter said many people liked the lack of commute and better balance of doing some work at home.

Half of parents found it difficult to combine work and childcare at home. Mothers working at home carried out more childcare and risked needing to do “two jobs at once” – which some did, without sacrificing productivity.

“For some people working at home has created challenges; it depends on what your caring responsibilities are, what support you have from a partner and whether or not they’re participating in the caring or home management,” said Dr Baxter.

“Working from home hasn’t necessarily improved things for women overall. There’s still a lot of work to be done combining work, care and other household work that is still largely falling to women.”

The government is aiming to address the problem of parents not being able to find childcare that fits their need with a new website, allocated $16.9 million in the May budget. Education Minister Alan Tudge expects it to launch in 2022.

Department officials say this will offer parents information that is currently spread across several sites.

“It’s about bringing together quality data with fee data much more in real-time and much more localised, allowing people to do a bit of a calculation based on where their rate of subsidy is at, and where there might be a service that meets that in that particular area,” deputy secretary Ros Baxter said.

Jane Hunt, chief executive of the Front Project, was surprised by the high proportion of families – nearly four in five – saying the expense of childcare was a barrier to starting or returning to work.

“We knew affordability was an issue, but we didn’t know it was that much of an issue,” she said.

“For many families, looking for the right place for their child to be in education and care was stressful and in fact, there was little genuine choice – once you factored in its geography, availability of hours and … hours that suited their family needs.”

The research found all families experienced similar barriers to participation in work, although those with higher incomes were more able to look at alternatives such as nannies or weather the financial challenges.

The survey of 1695 parents with children aged 5 and under and focus groups were done before the government announced its plan to increase the subsidy for families with two or more children in care at the same time.

Ms Hunt said this would go some way to alleviating concerns around affordability.

The government’s policy, expected to start in mid-2022, will help some 250,000 families who have two or more children aged under 6 in care – about a quarter of all those with young children in childcare.

Labor announced last year it would increase subsidies across the board, to a maximum of 90 per cent.

Professor Marian Baird, head of work and organisational studies at the University of Sydney, said the second instalment of the institute’s Families in Australia Survey: Towards COVID Normal study was consistent with other studies showing greater flexibility had added burden for mothers.