Typical eyewear glass is made brand new from scratch, but at Blue Planet Eco-Eyewear, it’s made from material waste despite the process being more time-consuming.

David Weinstein, founder of Blue Gem Eyewear, started Blue Planet in 2009 to make sunglasses more sustainably. The project was put on hold when Weinstein was diagnosed with cancer, but his son Matt took on the effort with his wife, Lisa, who serves as chief executive officer. The family produced 12 sunglasses and eyewear styles, including the bestselling Lucia reading glasses, and the line has grown to 70 styles under the Pacific, Classic and Street ranges.

“We’re in mom-and-pop shops, which are the backbone of this business,” said Lawenda-Weinstein. “Whole Foods is probably our most notable partner. Ninety percent of our business is driven from wholesale and my goal is to make it a 50-50 split between wholesale and retail.” — OBI ANYANWU

Raul Rudman was penniless when he emigrated to Cuba from Poland after World War II, but he had a skill: he was a master tailor. He started a successful career in his new home until Fidel Castro’s Communist regime confiscated all of his assets, prompting Rudman to flee again, this time to America. He settled in Miami and with his son, Frank, reestablished his business.

Sportailor creates several brands, including the Weekender as well as Hook & Tackle, which will be shown at the MAGIC pop-up in Florida.

Weekender, which has been around since 1938 and initially focused on guayabera shirts and cabana sets, has evolved into a casual lifestyle and travel brand. It is targeted to the resort market and sold at major resorts and hotels around the world.

“We’ve owned the name since 1963 and we’re rebranding and refocusing it as an outdoor resort brand,” Stan Rudman said. At the show, Weekender will also launch a men’s swimwear line, completely made in the USA, featuring colorful graphics that will pair well with the brand’s linen shorts and shirts, he believes. The swimwear is priced to sell from $50 to $75. 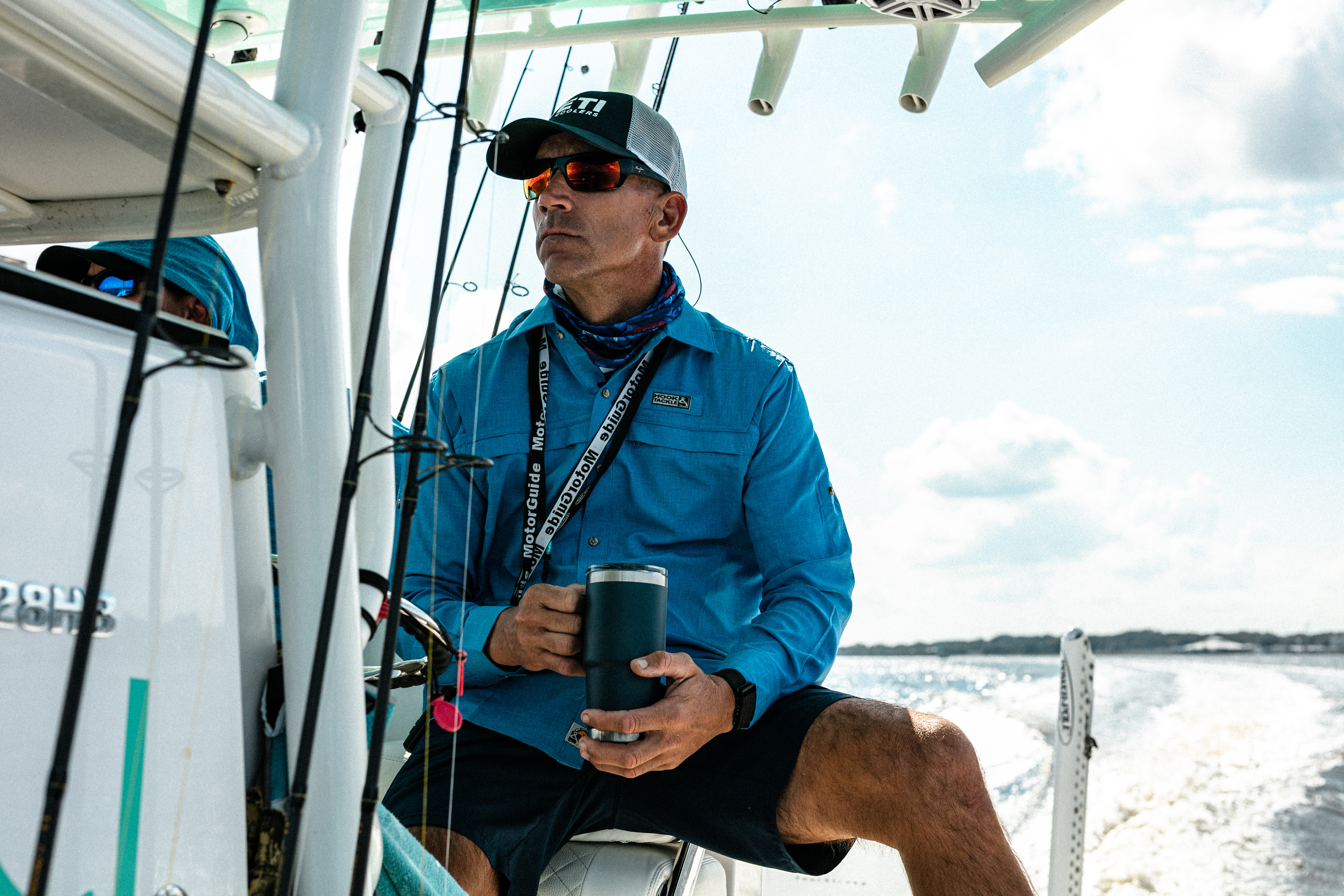 Hook & Tackle is a performance-oriented label targeted to fishermen and boaters who are seeking functional and affordable gear. The line features UPF 50+ sun protection in several products including its popular performance tees and hoodies, which retail for $40 to $80. “I’ve actually never seen items sell so fast at retail,” Stan Rudman said of the UPF products. “But people are spending so much time outdoors because of COVID-19 and those who would never have thought of a fishing company are finding us. It’s been an interesting ride.”

It’s also allowed the company to find a whole new stream of revenue: neck gaiters that can double as face masks. “We’ve sold hundreds of thousands of units since March,” he said.

Stan Rudman said that since so many retailers have been hesitant to commit to orders because of the pandemic, he’ll be showing the spring collections for both brands, as well as a smattering of fall. “Because we’re Florida-based, we have inventory all year, so everything is reorderable,” he said. — JEAN E. PALMIERI

Ernie Nunez doesn’t want to sound boastful, but the founder and designer of the footwear brand YRU Shoes says if a girl isn’t wearing a pair of his shoes at a festival or rave, “then she’s not that girl.”

Nunez, who describes himself as a “shoe dog,” has been in the footwear business for 28 years at such companies as Nordstrom, J.C. Penney, Guess, Skechers and more, according to his LinkedIn page. A brand he created in 2004, Punkrose, was sold to Skechers four years later and he joined the larger company as vice president of product development for three years until he left to start YRU.

“I started this just for fun,” he said of the 10-year-old label. “It’s like a retirement job for me. I didn’t really need to work anymore.”

He described the brand as “very edgy, fun, funky and Goth,” and it has amassed a large following for young women partial to attending festivals such as Coachella. Although the platform sneakers and boots, sandals, flats and heels are colorful and graphic, sporting everything from butterflies and rainbows to hearts and space prints, the collection actually appeals to a wide range of women. 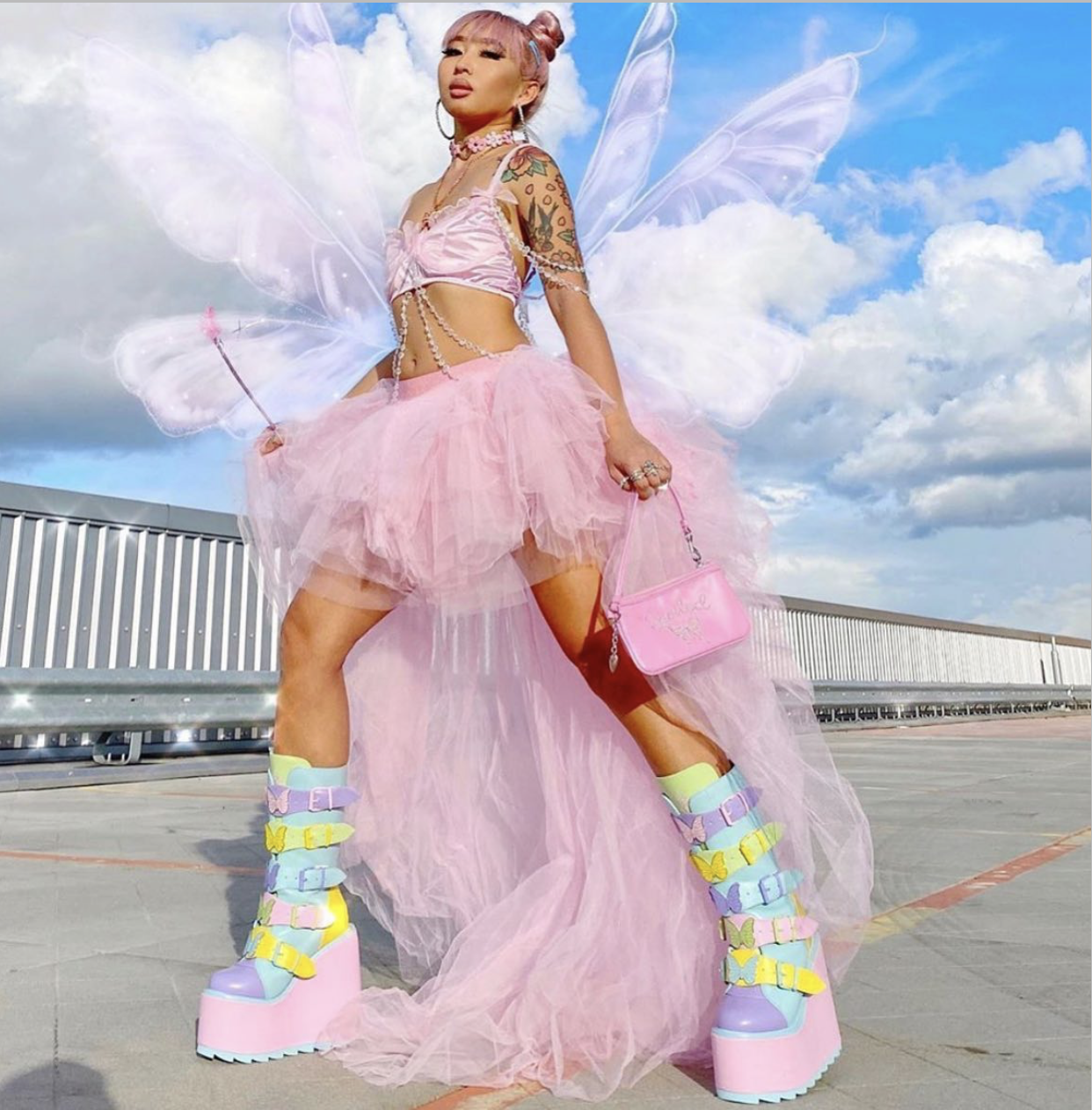 The Dune boot from YRU Shoes.

“Our age group is between 18 and 34,” Nunez said, adding that “girls in their 20s love our product. We are number-one in the festival business.”

And even though festivals have been canceled because of the COVID-19 health crisis, Nunez said YRU hasn’t experienced a drop in sales. “Actually, since the pandemic, our business has doubled,” he said. “The girls who are stuck at home have nothing to do so they’re pretending they’re at a festival” and posting photos of themselves decked out in their finest outfits and YRU shoes on Instagram and other platforms.

In fact, Nunez said since starting the company a decade ago, he hasn’t needed to organize any photo shoots to promote his brand, “we just re-‘gram their photos.”

While YRU has a strong direct-to-consumer business on its own website, Nunez said he’s been hoping to increase his reach in Florida for a while and thought showing at the MAGIC pop-up could help. Right now top wholesale customers for the collection include Dollskill, Beserk in Australia, The Alley Chicago, Rave Wonderland in Los Angeles, Trash and Vaudeville in New York, iHeart Raves, Cyberdog in the U.K., and other sites that cater to festival fans. 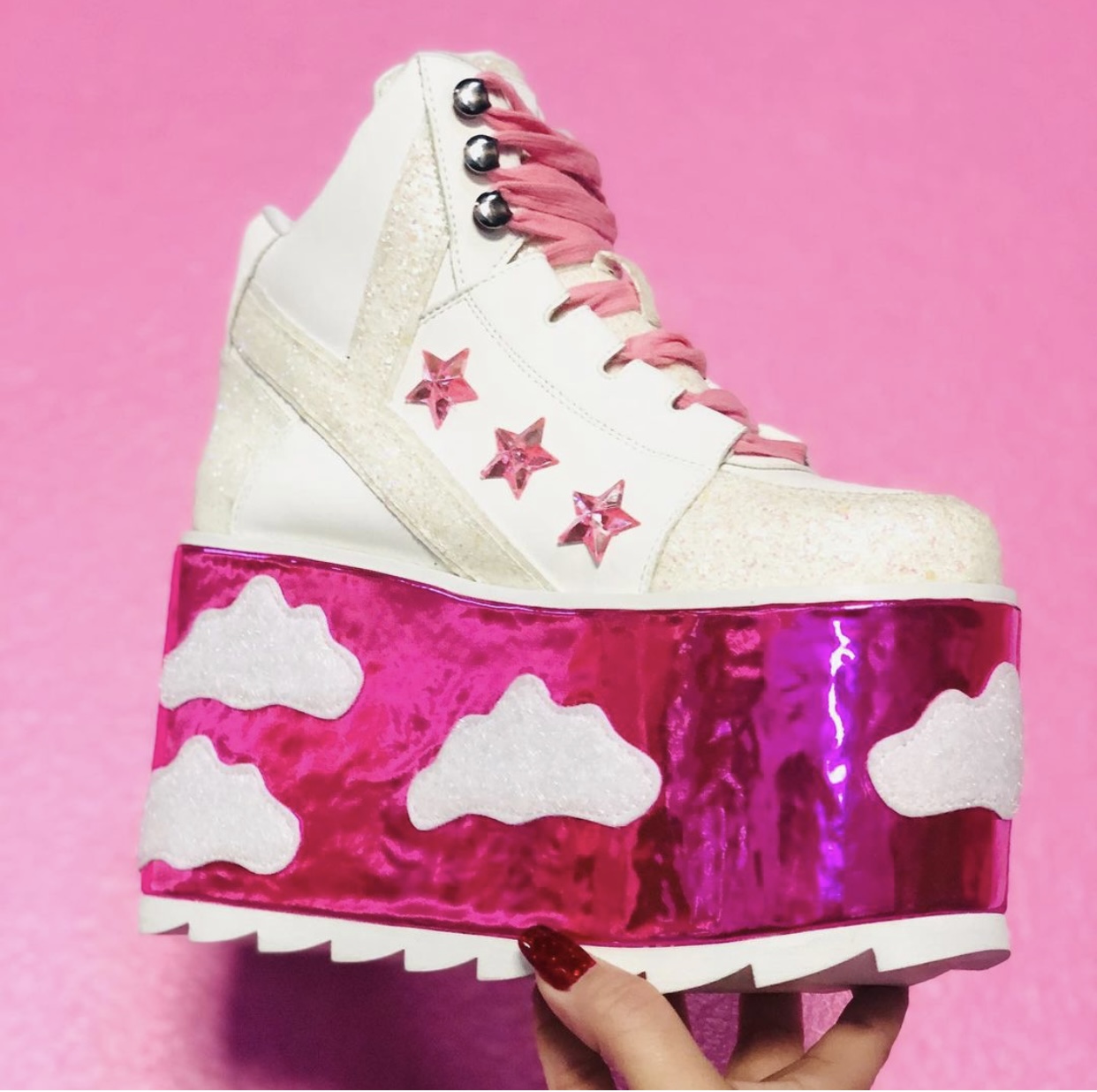 At MAGIC, Nunez said he’ll be offering selections from his hottest-selling items — the Qozmo, a platform sneaker that retails for $120, as well as the Dune, a strappy platform boot that sells for $130. He’ll also be introducing Xtra, a line targeted to dancers and entertainers, as well as an assortment of heels, which he said are also “doing very well.” — J.E.P.

Undaunted by the fallout from the pandemic, Kimberly C will be showing for the first time at MAGIC in hopes of opening new accounts and increasing brand exposure.

Adept as the company and many of its customers have become at bolstering online sales and interacting remotely, general manager Jason Chang spoke about the importance of making connections in person.

“We’ve been around for a while and doing really great sales, but we haven’t really had an opportunity to get out in front of our customers.” he said. “To start building stronger relationships with our customers, you do need to get in front of them. We’ve been relying a lot on our online platforms and those are doing well. And people have been getting on the phone and adjusting how to purchase from and interact with us. But there is something special and nuanced to face-to face-interaction. There is definitely a more human level of relationship that comes from that and building rapport. That is something we want to do better at, and increase as we grow our brand.” 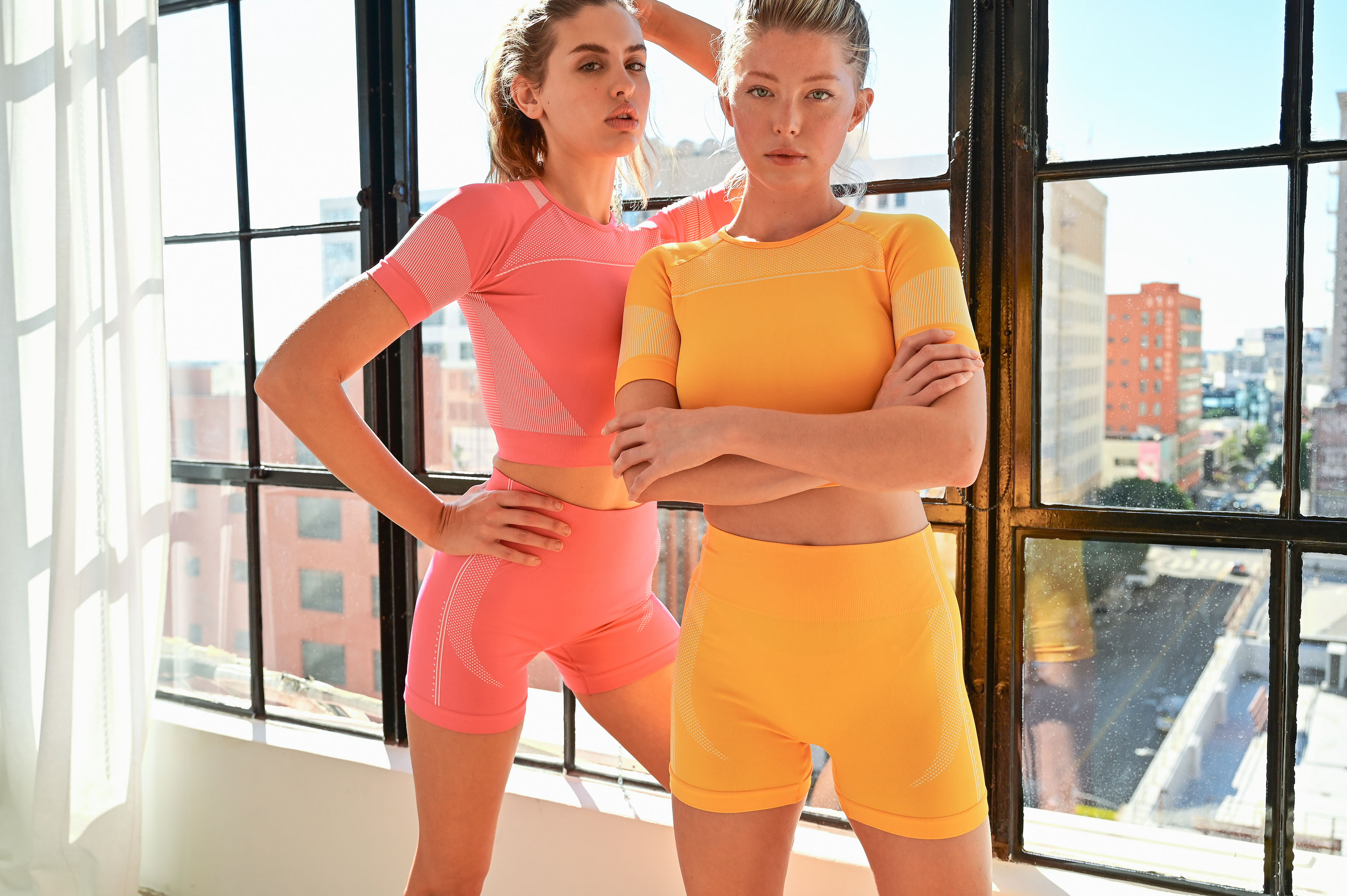 Kimberly C is trying to relay a sense of renewal in its designs. Courtesy of Kimberly C

Despite having to temporarily close its office and warehouse in March and April to abide by federal orders, Chang continued to pack and shop merchandise due to the need. The brand’s 10-person team figured out workarounds to ensure that customers were getting what they needed “to make things work and just to survive,” he said. The active and athleisure collection is designed to be more versatile or “COVID-19 resistant,” in that many of the tops, bike shorts, leggings, sets and hoodies can be worn for working from home, lounging around, outdoor outings and workouts, among other activities.

Launched in 2009, Kimberly C is owned by Obededom Inc., and retails from about $20 to $40. Looking to relay a sense of renewal to many people, whose work and off-hours lives are now primarily centered in their homes, the Kimberly C collection features brighter, fun and punchier colors. Shoppers will find lemon, fuchsias, corals, peaches, lilacs and other refreshing shades. “This represents our commitment to giving customers something to look forward to. We’ve been in this situation for a year now and we definitely want a collection that represents a brighter future,” he explained. — ROSEMARY FEITELBERG