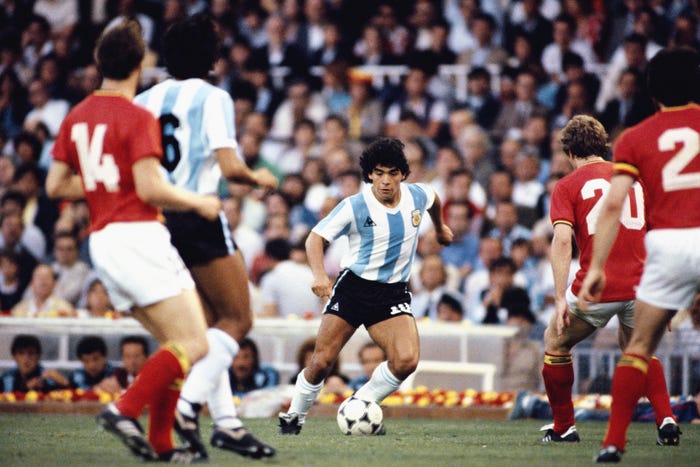 Maradona (right) made his professional debut for Argentinos Juniors in on October 20 1976, just 10 days before his 16th birthday. 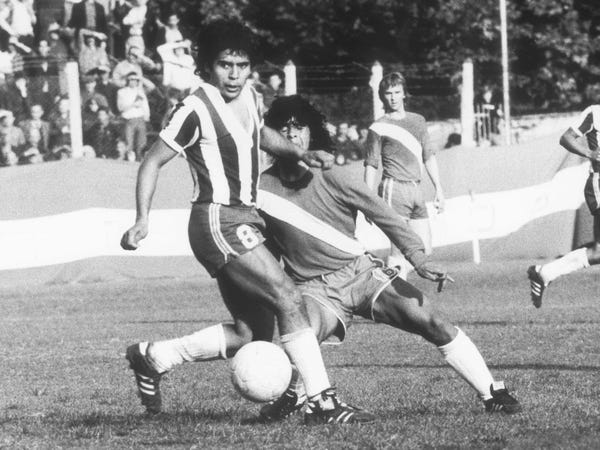 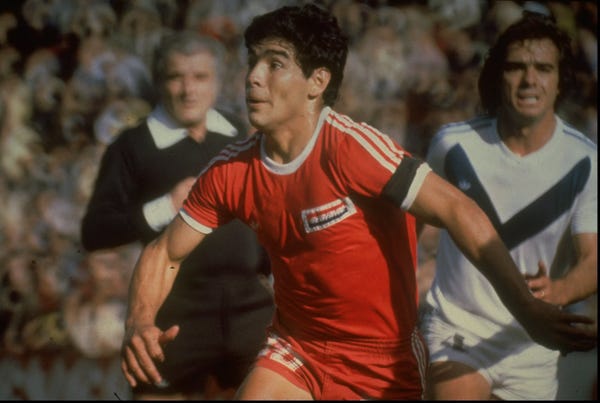 In his third term at Argentinos, he became the youngest top scorer in history of the Argentine Primera Division, finishing the season with 22 goals. 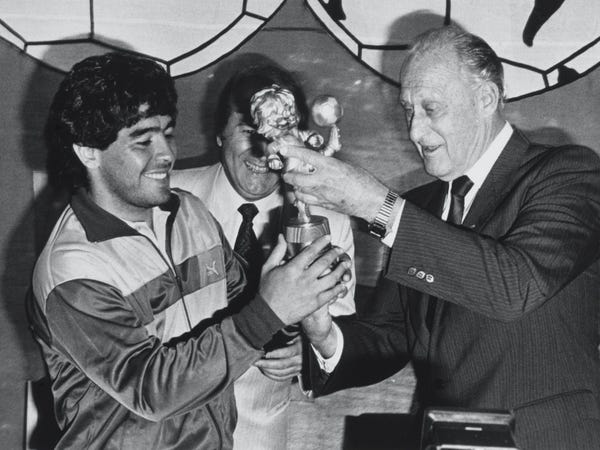 In 1979, Maradona scored his first ever goal for Argentina in a match against Scotland at Hampden Park. 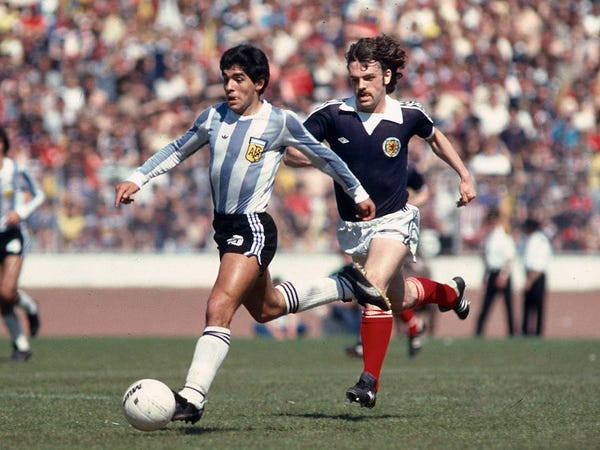 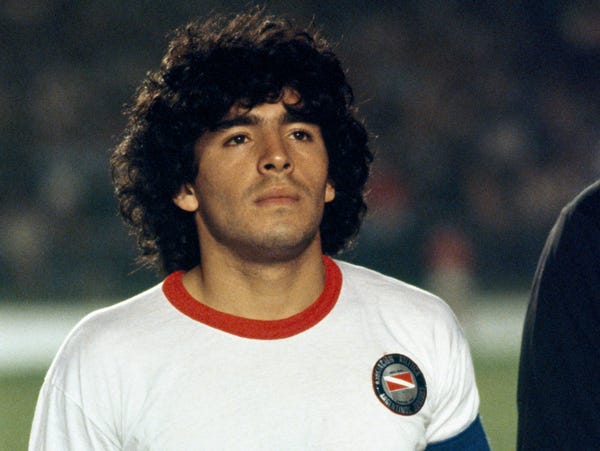 Form that earned him a move to Boca Juniors in 1981, where he immediately guided the team to the Primera Division Metropolitano title. 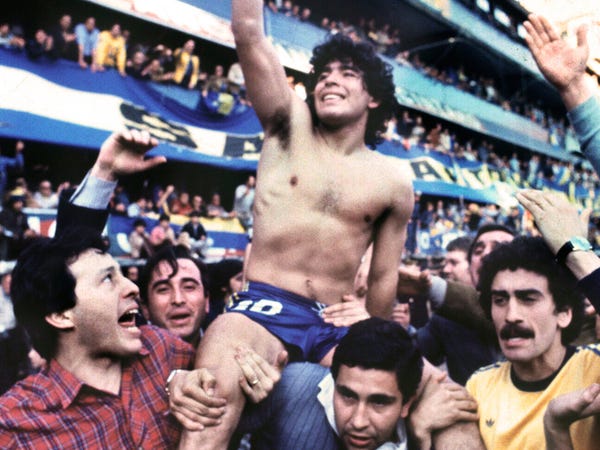 After just one season at Boca, FC Barcelona paid a world record fee of $3 million to bring Maradona to the Camp Nou. 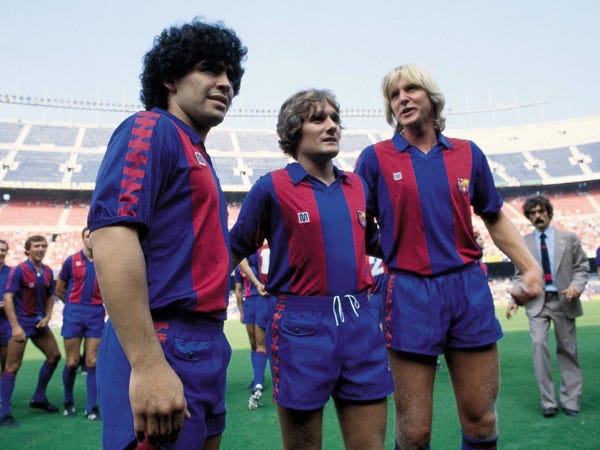 He spent two seasons with Barca, however was unable to clinch the La Liga title despite his impressive displays. 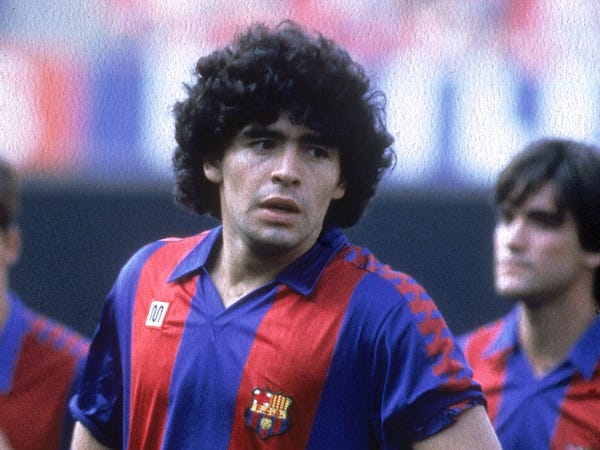 Maradona then moved to Napoli in 1984 for another world record fee of $5 million. 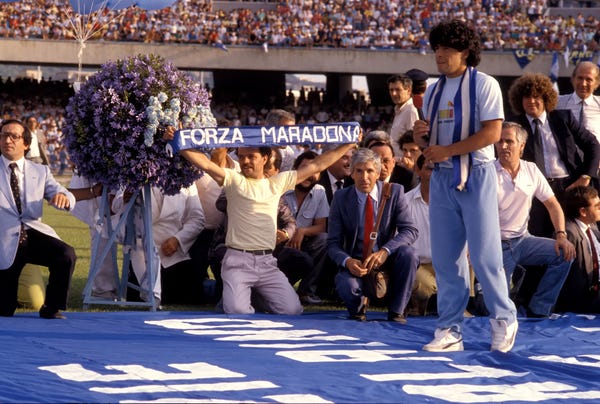 In his first season at the Stadio San Paolo, he was voted Serie A's Player of the Year as Napoli finished 8th. 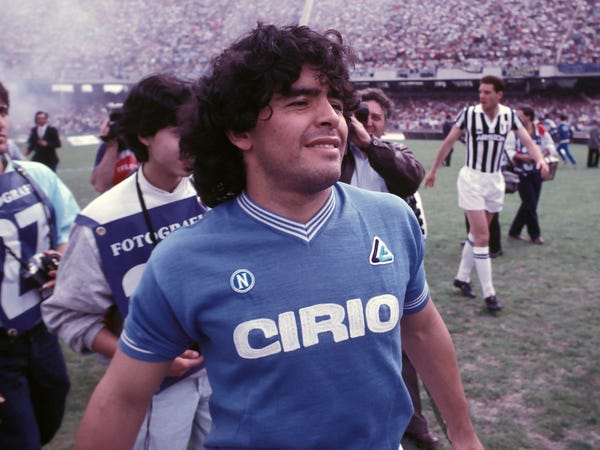 1986 saw Maradona lift the World Cup with Argentina. His two goals against England in the quarterfinal — one of which would later be known as the "Hand of God" — are two of soccer's most famous ever. 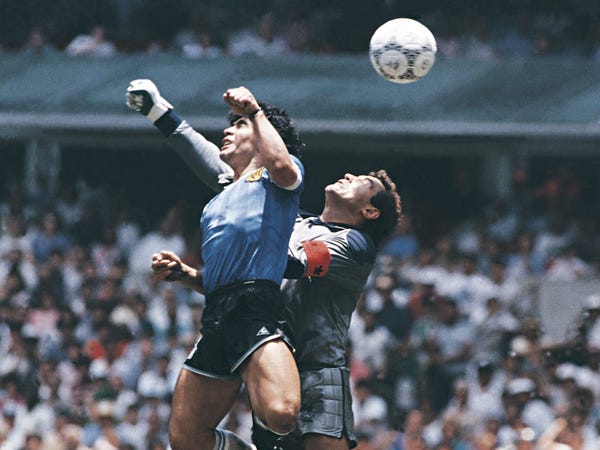 A year later, Maradona guided Napoli to its first ever Scudetto, earning him legendary status at the club and in the city of Naples. 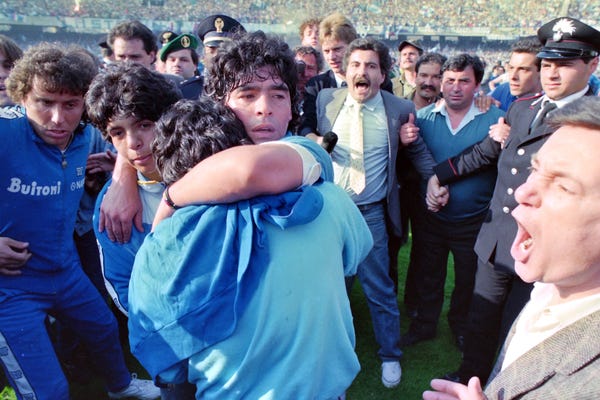 He couldn't do the same in 1988, but still finished as Serie A's top scorer. 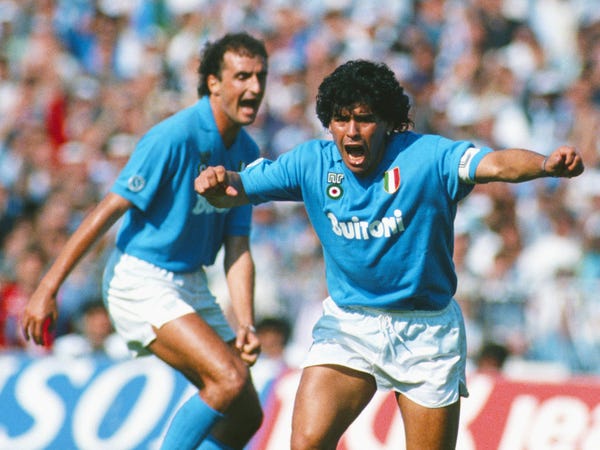 In 1989, Maradona and Napoli won the UEFA Cup (now the Europa League), beating Stuttgart 5-4 in a thrilling two-leg final. 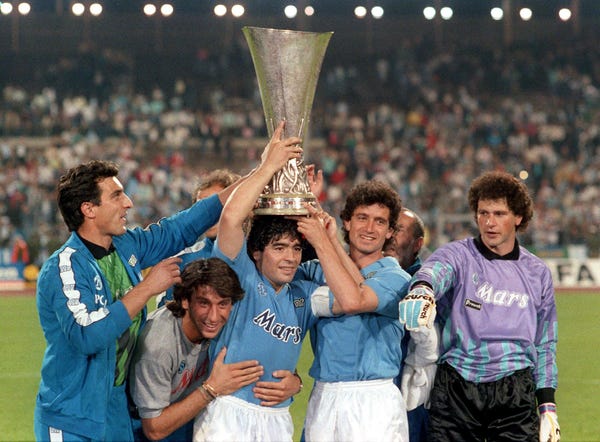 More silverware followed for player and club in 1990 — this time a second Serie A title. Napoli haven't won another since. 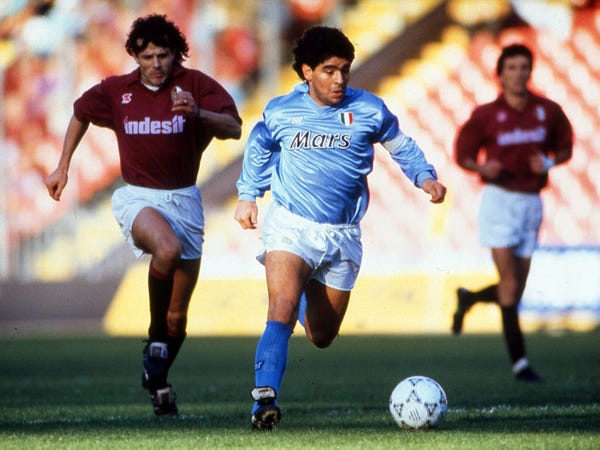 Maradona went from hero to zero however in 1991. After failing a drugs test for cocaine, he was banned for 15 months and never played for Napoli again. 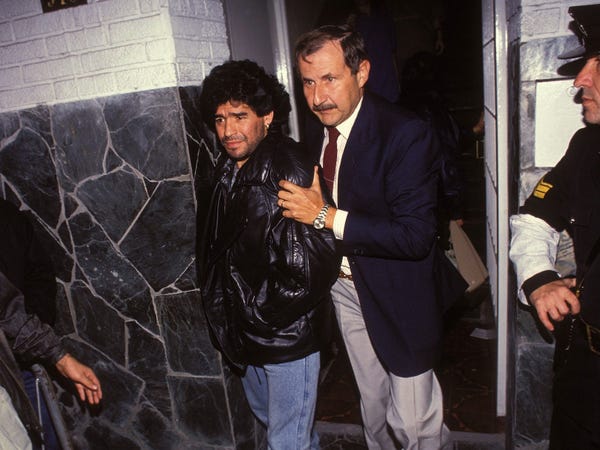 He returned to the field in 1992, this time for Spain's Sevilla, where he played for just one season. 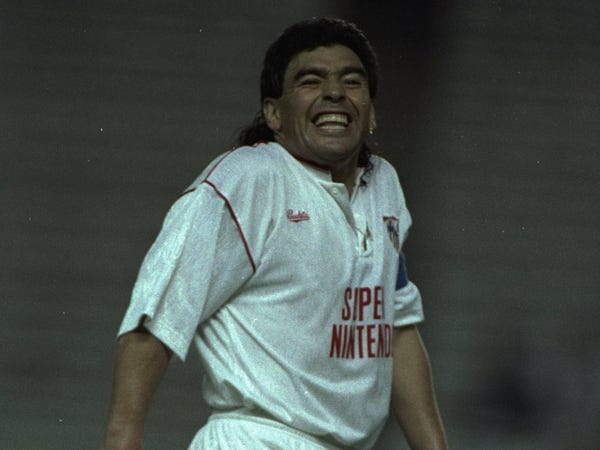 He returned to Argentina in 1993 to play for Newell's Old Boys — the boyhood club of Lionel Messi. Despite playing just one season, he is still seen as a legend at the Estadio Marcelo Bielsa. 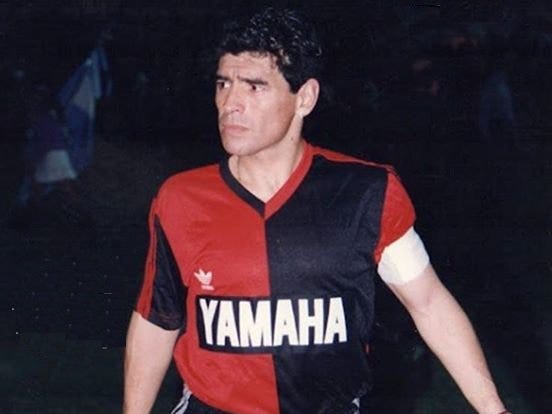 In 1994, he was sent home from the World Cup and was suspended for another 15 months for cocaine use. 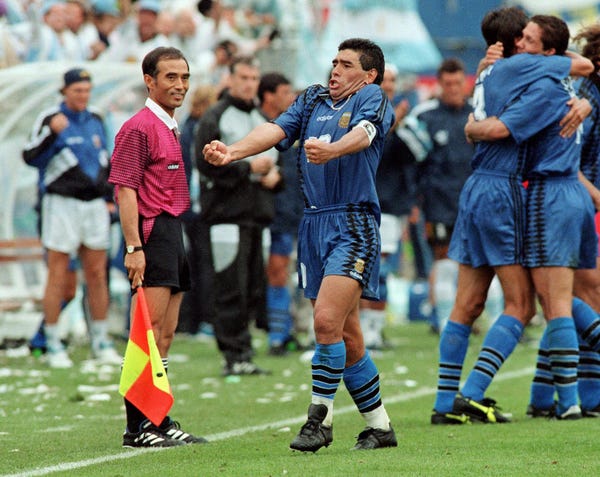 After which in 1995, he returned to former club Boca, where he would see out the rest of his playing days. 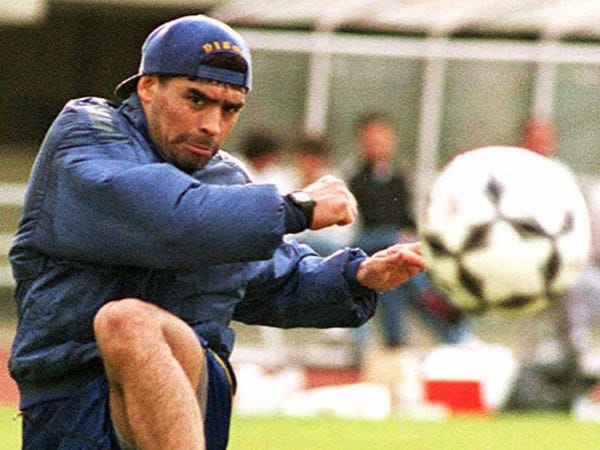 He officially retired from professional soccer on October 30 1997, the day of his 37th birthday. 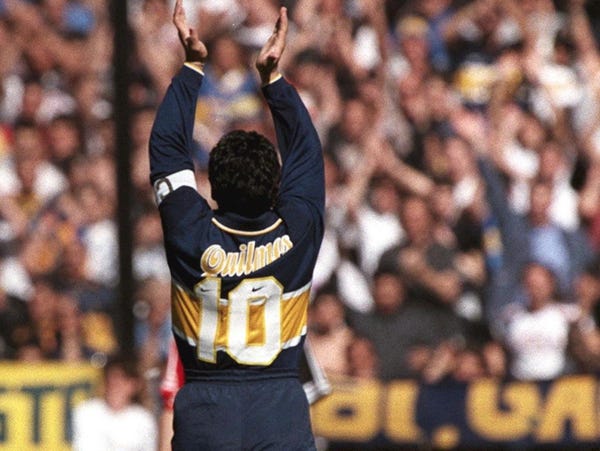 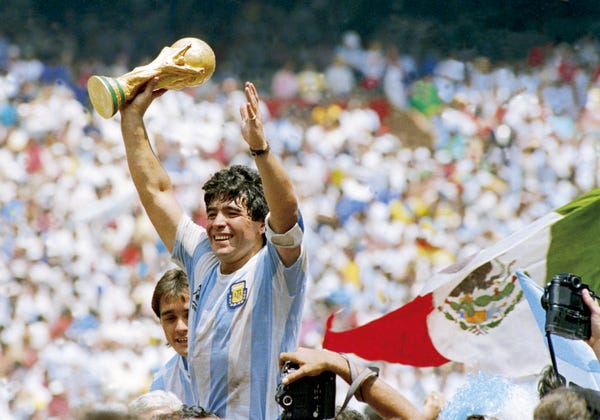