More than one in 10 workers may be without a job at the peak of the economic contraction due to the coronavirus pandemic, which 15 top economists on average predict will push the budget to a record $140 billion deficit next financial year.

The most pessimistic forecast was for the deficit to blow out to $300 billion in 2020-21 and 20 per cent unemployment. 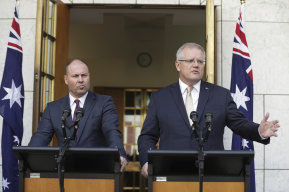 The Sydney Morning Herald and The Age surveyed the economists for a special edition of the biannual Scope survey focused on how the virus and measures to slow the spread will affect jobs, economic growth and government spending.

The panel on average expects the budget to fall into deficit by $87 billion in 2019-20 and $140 billion the following year.

University of Kingston's Steve Keen expects by 2020-21 the deficit could be $300 billion, while Westpac's Bill Evans and AMP Capital chief economist Shane Oliver predict deficits of $210 billion and $200 billion respectively.

Industry Super's Stephen Anthony had the best-case scenario at $55 billion for next financial year, closely followed by University of Melbourne's Neville Norman and Victoria University's Janine Dixon, who tipped $60 billion.

GDP is tipped to be flat or to contract by up to 2.5 per cent in the March quarter. In the June quarter, the best result forecast was for the economy to shrink by 2.8 per cent but Dr Keen expects a 15 per cent contraction. That would be the worst quarterly result on record.

All of the economists are predicting a sharp increase in joblessness, with an average forecast of 11.5 per cent at the peak. The best-case scenario of a 7.8 per cent unemployment rate was forecast by Commonwealth Bank's Gareth Aird for the end of June. ANZ's David Plank made his prediction before the introduction of the JobKeeper package and expected a 13 per cent unemployment rate by the end of the financial year.

At the peak of unemployment, Dr Keen is tipping 20 per cent of people could be without work, which was the worst-case scenario out of the panel. Monash University's Jakob Madsen estimated a 17 per cent rate.

Mr Anthony was again the most optimistic, expecting 8.5 per cent at the peak, closely followed by HSBC's Paul Bloxham at 8.6 per cent.

The majority of the panel said the federal government's $130 billion JobKeeper scheme, which offers a wage subsidy to keep staff on-board at struggling businesses, would help kerb the damage to jobs.

Independent economist Saul Eslake, who expects an 8.2 per cent unemployment rate by June and a peak of 10.75 per cent, said before JobKeeper was announced he was forecasting 1.2 million to 1.5 million workers could lose work.

If this were the case and all those workers counted as actively looking for work, the jobless rate could have risen up to 15 per cent.

"After thinking about the government's wage subsidy scheme, I've cut my guesstimate of the number of job losses to about 765,000," he said.

Dr Norman said predictions made about the economy for 2020 had been "radically shattered" by the pandemic and forecasts were heavily dependent on the length of the shutdown and spread of infections.

"By June or July 2020, we should have some fiscal deficit numbers published that will terrify a majority of people hooked on classical or monetarist economics," Dr Norman said. "Roll on another year and then an even bigger fiscal effect, in my assessment, will arise from the erosion of tax revenues collected … from persons and businesses."