However Rockwellian that might sound, in person she comes across with no airs, but unquestionably determined, quietly self assured and team-oriented. An 11-time All-American, St. Pierre holds the American records for both the indoor mile (4:16.85) and the indoor two-mile (9:10.28.) To qualify for the Tokyo Games, the 26-year-old set a meet record and a personal best for the 1,500 meters with a time of 3:58.03.

Last week the American runner arrived for an interview unfettered and on her own, having driven herself. Weighed down only by a New Balance workout bag filled with running gear and sneakers, she politely waved off an offer for assistance. She trains with Team New Balance under coach Mark Coogan, a former Olympic runner. Keeping Vuarnet sunglasses perched on her blonde-haired head, she was dressed in team colors — sporting a pastel T-shirt, royal blue running shorts and 880 sneakers from New Balance. Tan and muscular from all those miles of running under the summer sun, St. Pierre is heading into the Olympics as one of the American favorites to strike gold. Like many elite athletes, she is not about to talk pre-competition goals.

‘Sex and the City’ Reboot Fashion Moments: See the Photos 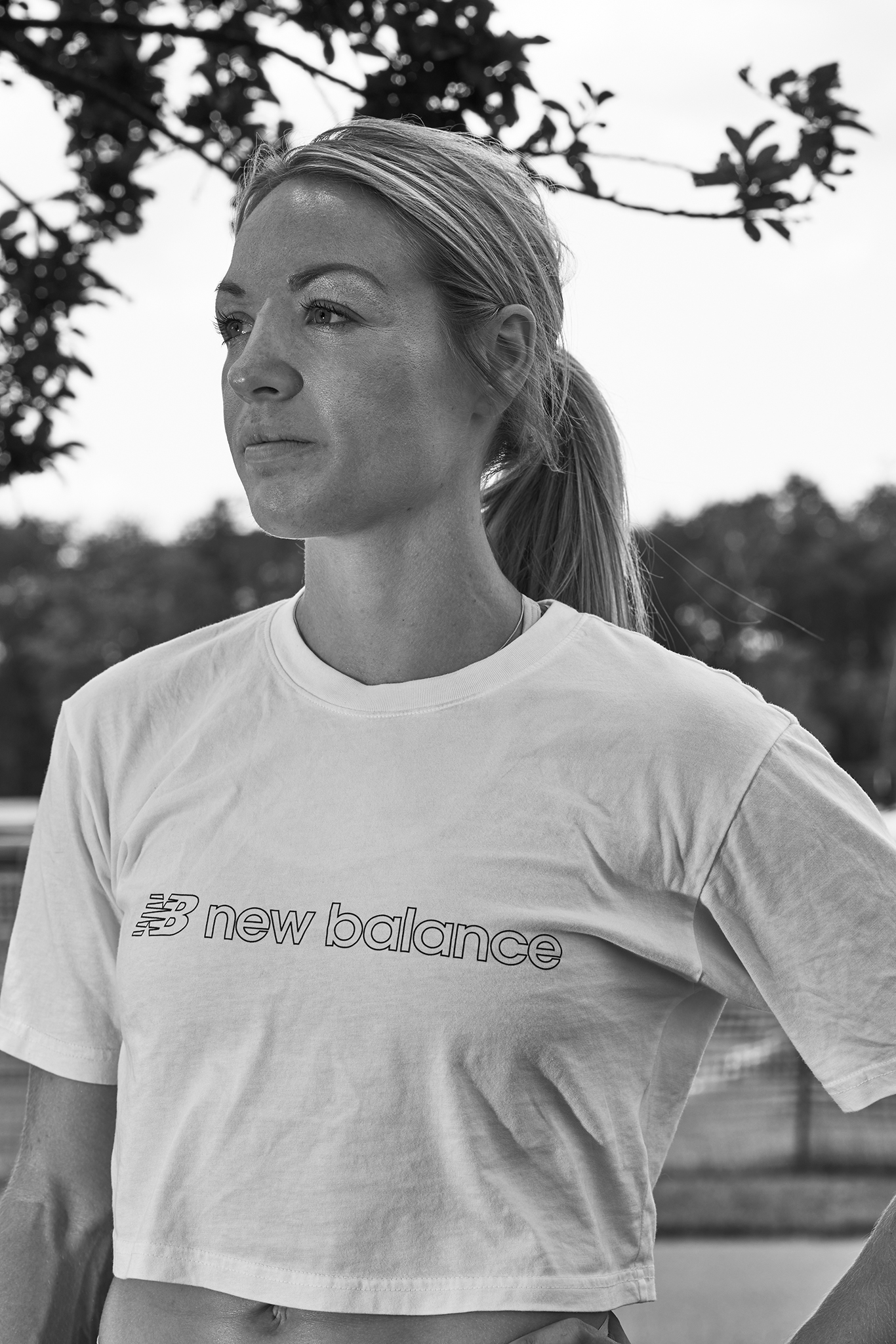 That would seem to be evident. During a photo shoot last week as St. Pierre effortlessly raced down a running path near Boston’s Charles River, a grizzled old-timer teetering on a 10-speed bicycle offered, “Not bad.” His comment made the photographer and this reporter laugh, but she graciously piped up, “Thank you!”

Like many of the other 11,000-plus Olympians competing in Tokyo, COVID-19-related restrictions will keep St. Pierre away from today’s Opening Ceremony in Japan. More than anything the Team USA runner said she is looking forward to the opportunity “to compete against the world’s best athletes, to represent my country and to have the experience with my teammate Heather [MacLean, another Team New Balance runner]. Representing your country is the biggest honor.”

As for how the ongoing cultural discussion about what it means to be American and the mood of the country plays into her drive, she said, “I feel that America has some of the best athletes in the world. Our [Olympic] Trials are undoubtedly some of the most competitive. I feel that we are talked about a lot, but it’s just an honor to be able to wear ‘USA’ on my chest and to do my best. I feel the same as anybody else out there just competing for a spot to medal.”

Upon returning to Montgomery, Vt. — current population 1,201 — after the Olympic trials, St. Pierre was welcomed back “by so many people” with banners on her street and throughout town. “That just meant so much to me. I do come from a rural small community and seeing how excited everybody is is just amazing. It’s so humbling. It definitely gives me a greater bit of motivation and it will in the race. I’ll be thinking about them.”

Although she trains in Flagstaff, Ariz., at 7,000 meters above sea level for part of the year, Vermont keeps her rooted. Visitors to her hometown are greeted with a sign that reads, “Smile, you’re in Montgomery.” Cabot Cheese is her newest sponsor but her family’s farm has been working with the company for many years. And the hardworking people who till the land are with her in other ways. Chatting about summer weather, St. Pierre mentioned how news of rain in Vermont would help the farmers after a two-month drought. Country life resonates in other ways, too. 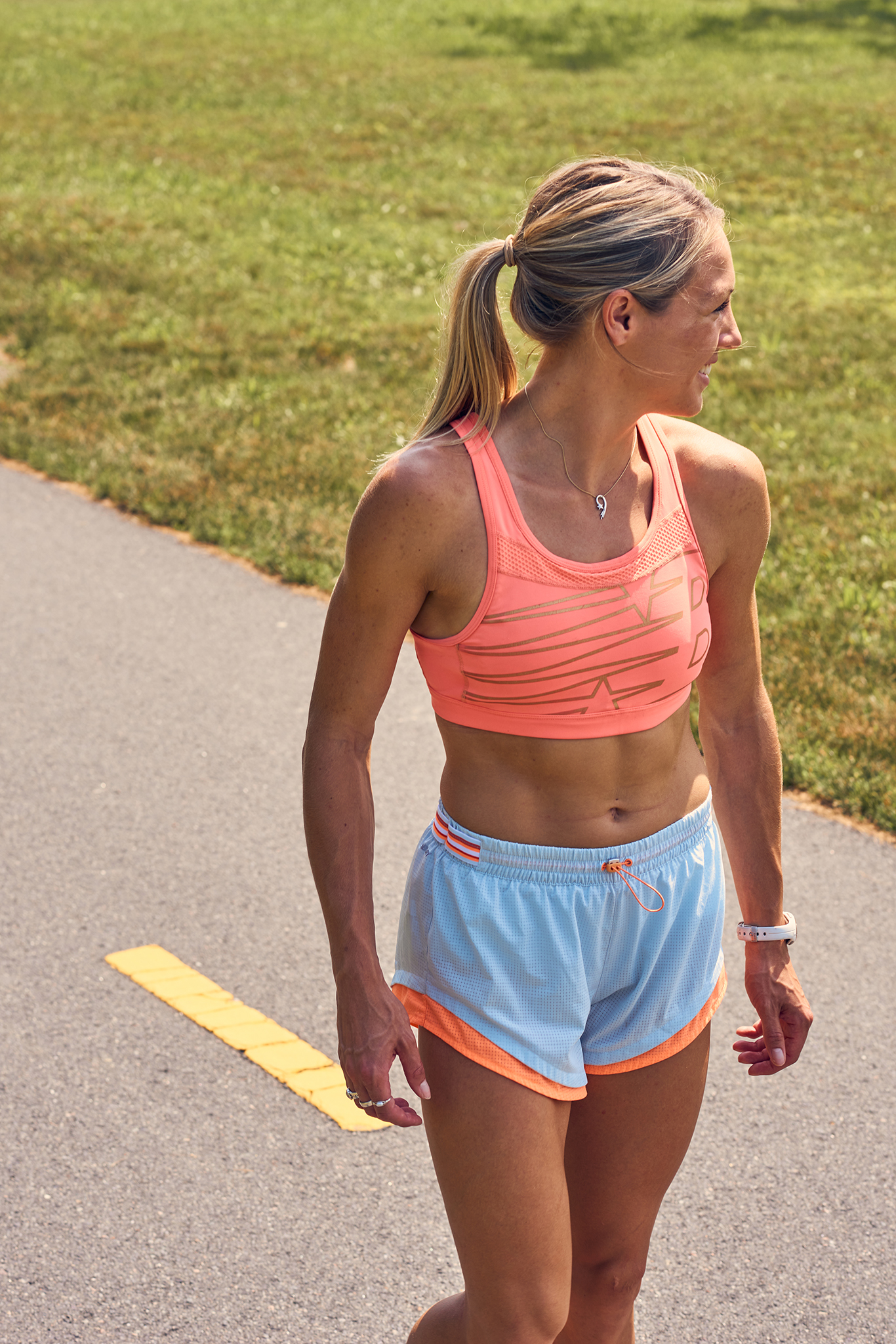 “I definitely learned a work ethic on the farm, growing up and that’s something that I carry with me in my career every day at practice and while I compete as well. But at this level, you know everybody knows how to work hard,” she said with a laugh. “So that’s where I learned my work ethic, but I’m not necessarily saying that I work harder than everybody else.”

Growing up, days on the farm started around 5 or 6 a.m. with St. Pierre milking between 30 and 40 cows before school. While millions of fans associate the Olympics with the crowning golden moments of the podium, the training required to get there is often overlooked. “It’s just a lifestyle. We go to practice every day. Everything [that] we do we have to think about how that is going to affect us in our training. Our body is our tool. It’s definitely tough. You’re pushing yourself every day to limits that you probably used to not even dream of,” she said. “Some of the workouts that I’ve run in practice I am really proud of. They are PRs [personal records] that I used to run in college and now I’m running them in practice. But I have my teammates to get me there and my coach who believes in me.”

That said, it’s really hard to speak about just how hard the training is, she said. “It’s definitely really gradual. Year-after-year you get stronger and stronger. All of those years add up to the athletes that we are now,” St. Pierre said.

Not one to go crazy in the gym, weight training is not as challenging as other workouts. She said, “There are definitely some running workouts that are like, ‘Wow.’ I ran one in Phoenix a few months ago. I ran a really fast mile. I think it was 4:30. Then I did 4 x 400s at mile pace and then I ran another mile at 4:30. That was probably one of my best workouts ever.” 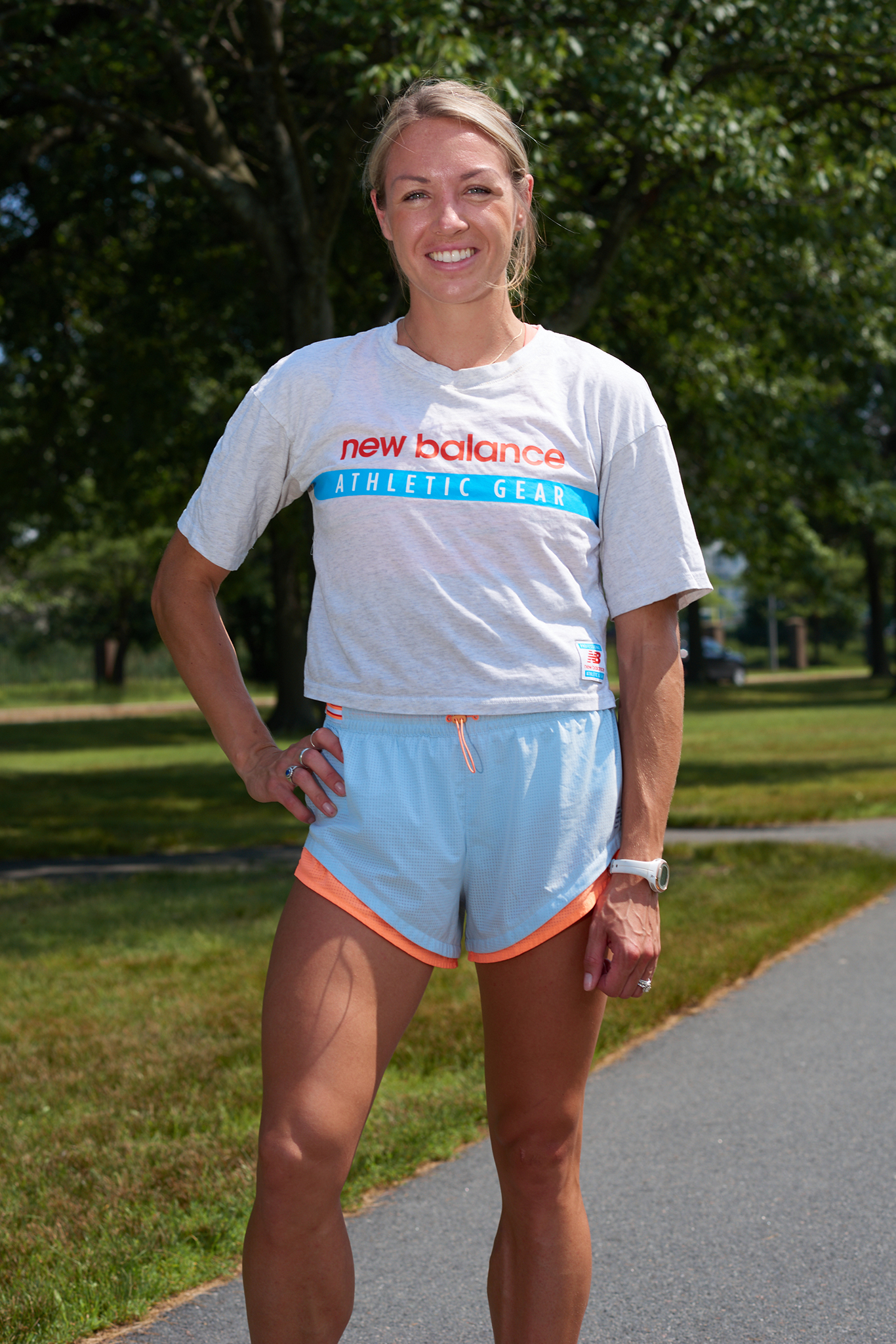 While many Olympians started rehearsing their medal-winning bows as children, St. Pierre only believed that competing in the Games was within reach a few years ago. Becoming a professional runner was something that she never envisioned as a child. “I went to the 2016 Trials but I was not a contender. I’ll be honest. I was doing the steeplechase and so much has changed. I’m a completely different athlete than I was. It became more prevalent about three years ago. After qualifying for Doha [the 2019 Track and Field World Championships], I understood, “OK, this is the same process. If I can do that again, I can go.’”

Her motivation at the Olympic Trials in Eugene, Ore., was more heart-driven. St. Pierre dedicated the race to a cousin’s toddler, who had been killed in a car accident earlier this year. “It was just a really tragic accident that had happened. I thought about them beforehand. There’s a lot of pressure put on athletes. I felt a lot of pressure before the race. Seeing the strength that her parents showed to everybody, after they lost their daughter just put things into perspective for me a lot. I felt like if they could go through that, then I could go through the Olympic Trials. It just made it seem really not as important as all compared to what they went through,” she said.

The pandemic shutdown caused other adjustments for everyone, including leading athletes like St. Pierre, who found themselves training solo more frequently after group practices were suspended. All that alone time may be an advantage in largely empty stadiums. St. Pierre explained, “We’ve been racing a lot still with no fans so we’re pretty used to that. I’m not that upset about the fans part. I’m more upset that my family can’t go.”

Making the point that every Olympics is pretty historic in its own way, she said: “Think of all the other Olympics that have happened in a year that we were at war. When you think back to those, they were historic moments. I’m just happy to be going.” 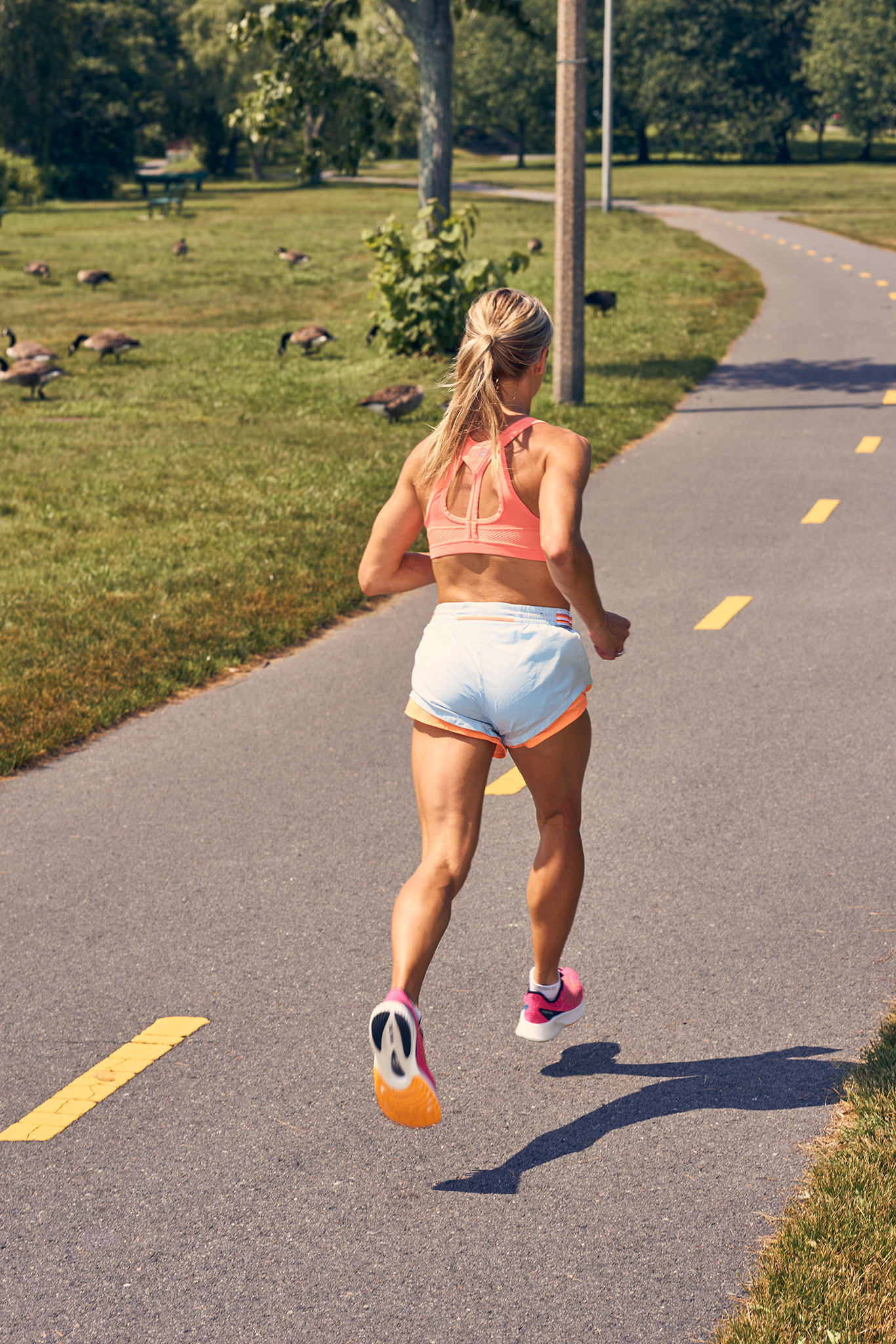 Her husband Jamie, friends and relatives will be cheering from the U.S. In line with the upcoming Games’ policy of one guest per athlete, St. Pierre is taking her coach, Coogan. Back in Bernie Sanders country, locals in her hometown will be pulling for her at a viewing party at the Phineas Swann Inn & Spa.

A graduate of the University of New Hampshire with a double major in nutrition: wellness and eco-gastronomy, that course of study has significantly benefited her training in terms of what she needs as an athlete to train at this level. Growing up she thought about becoming a nurse for a long time, but she also thought she’d be on the farm, too. “Obviously, I chose nutrition just to study. I thought I would have a career in that somewhere as well. When you’re younger, you don’t know what you’re going to do until you get older and experience the world,” St. Pierre said.

Before signing up with Team New Balance Boston in 2018, the runner mulled over the decision similarly to how she decided on a college. “I just went with my gut. When I visited New Balance and the team, I felt that it was right,” she said.

Aside from the company being welcoming, Coogan’s expertise in coaching women — previously at Dartmouth College and at New Balance — was a deciding factor. His experience as a former Olympic marathoner and New Balance-sponsored runner provided greater insight. “He’s already gone to the Olympics [in 1996] and done this. He just understands coaching an athlete at that level so much more, because he’s done that. And he just has so much confidence in his athletes. He talks about the team dynamic being very family-oriented and not just looking at me as a runner, but as a person,” St. Pierre said. “And New Balance is awesome. I love their shoes. I love their clothes.”

New Balance is her brand of choice with the suitably named “Accelerate” short and the “Relentless” and “Achiever Remix” crop tops being among her go-to pieces. NB Essentials’ “Field Day” boxy T-shirt, “Q Speed Fuel” short in UV Glo and the Sport Style Optiks Gradient Spray T-shirt are other favorites. The brand’s 880s (version 11) and Beacons are the running shoes she trains in. Lifting a foot to show a pair of black-and-white 880s, she said, “They’re these. I’ve been running in them nonstop.”

When not running, St. Pierre favors New Balance T-shirts and lifestyle shoes with jean shorts. “I really love the Levi’s and New Balance combo,” she said.

More reticent about the NCAA board’s recent decision to allow college athletes to earn money from their names, images and likenesses, St. Pierre described that as a pretty controversial one. “I don’t know how I stand on that to be honest. There are so many different sports and scenarios. It really depends…I was really surprised to see that though.”

Whether the sports media will be more respectful of athletes’ privacy in light of tennis standout Naomi Osaka’s request that they do so was another issue that St. Pierre stepped delicately around. “It’s really hard to say. I don’t really know,” she said.

As for Olympic qualifier Sha’Carri Richardson’s ban due to testing positive for marijuana during last month’s track and field trials, St. Pierre declined comment. Asked whether she idolizes any athletes, St. Pierre said, “For sure. [Fellow runner] Jenny Simpson is one of my biggest idols ever. I have followed her career for a long time and she’s somebody that I’ve looked up to for a long time. I just feel so fortunate that I’ve been able to run beside her in a few scenarios,” adding that the pair roomed together at Doha.

St. Pierre’s music preferences are varied, with Eric Church being a favorite. “I don’t know what I think about when I run though. It’s definitely not music,” she said with a laugh.

When not training, traveling or competing, she relishes the simple life — hanging out at home with her husband, being at the farm and doing things around town. St. Pierre said, “We like to ride our four-wheeler and hang out with my dog on the porch. She’s a German shepherd.”

With the Olympics upon her and all that training behind her, St. Pierre hopes to get a break some time after Tokyo. Nothing concrete is planned yet though. “I’m just taking it day-by-day right now,” she explained.