French star Noémie Merlant, who lit up the screen in Céline Sciamma’s “Portait of a Lady on Fire” two years ago, is doing double duty this Cannes Film Festival.

The former model is taking the red carpet in stride, having walked four times, first for the opening night gala and for “The French Dispatch” ahead of her own premieres. Walking up the famed 24 steps of the Palais des Festivals — perhaps the most famous red carpet in the world — marks a step forward for Merlant.

She started modeling at 16 and the experience left her feeling quite alienated from her own body. “I had a big epoch of my life when I was feeling very much like an object and trying to be ‘feminine,’” she said, but she pushed back internally and sartorially. “I was confused and I was lost and I was trying to hide.” She shunned dresses and, at one point, didn’t even feel comfortable wearing shorts.

Working as an actress and with Sciamma on “Fire” helped her regain her confidence and love of fashion, as did a friendship with Louis Vuitton creative director Nicolas Ghesquière.

“This time in Cannes, I feel more comfortable, I feel like I’m connected again and I want to feel really feminine. When I didn’t want to wear dresses he said, ‘It’s not an obligation, you do it when you want to and have control of it.’ And that I like,” she said of Ghesquière.

All the Looks at the 2021 Cannes Film Festival

It’s also his willingness to play with gender norms, push boundaries and encouraging her to take risks on the red carpet. That philosophy resulted in a variety of Vuitton looks this festival, from a sleek black pant and cape, to silver and black cocktail dresses, to the crowning glory of a gown for the “Paris” premiere. The custom look was inspired by the cruise collection, and embroidered with various sizes of white paillettes. 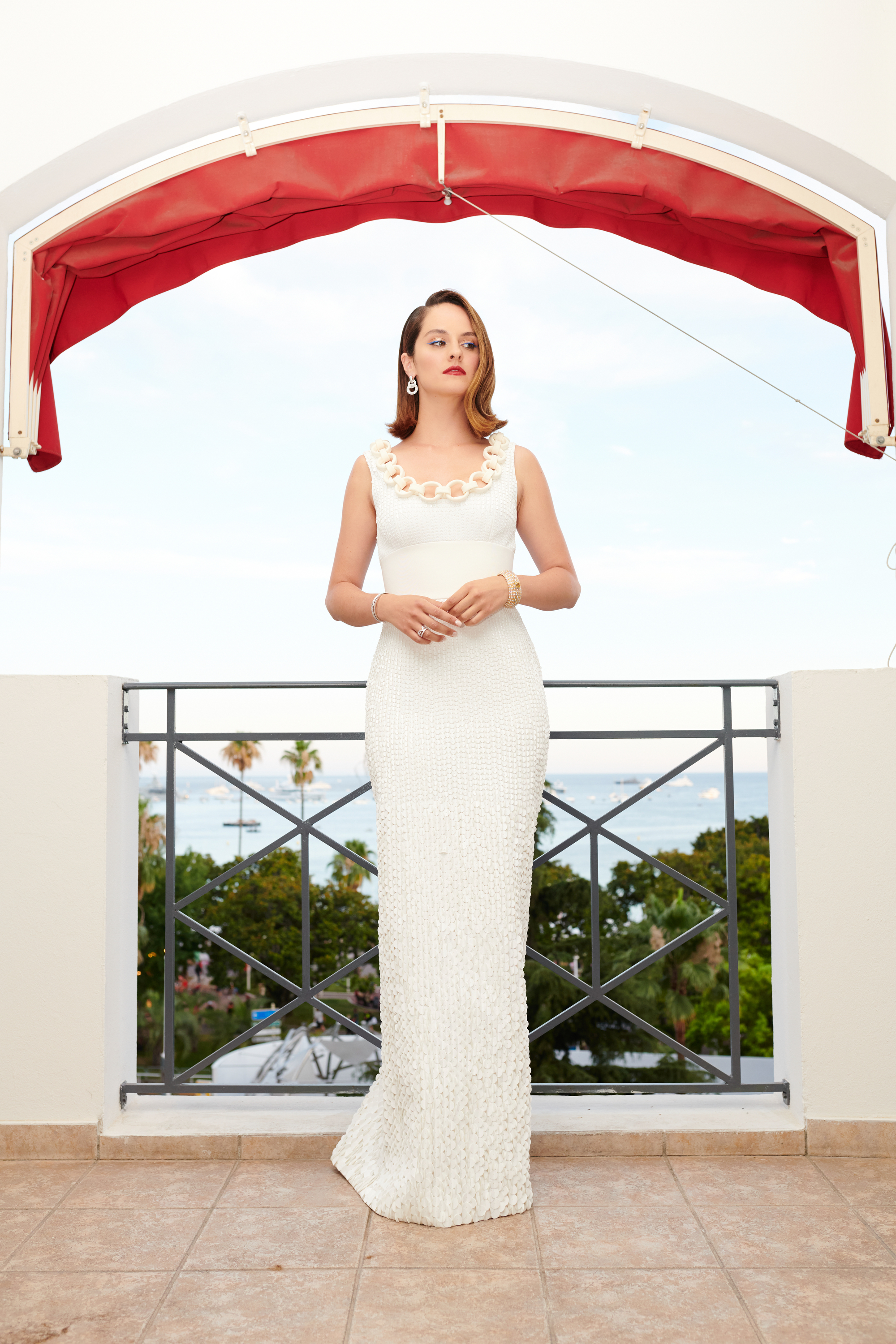 Actress Noémie Merlant poses for a portrait before her premiere at the 74th Cannes Film Festival on July 14, 2021, in Cannes, France. Michael Buckner for WWD

If the title of her film doesn’t give it away — meaning “my love” in both Romanian and French — it was a labor of love. Merlant co-wrote and co-stars with her partner, actor Gimi-Nicole Covaci, in the story of a summer holiday romance and heartbreak. Shot on a shoestring and with friends as the crew, it’s a story of first love captured on camera.

“This new story was happening between him and me, and we were like, what is going on, this is interesting, this is magic,” she said as their relationship grew from professional to personal. “One day he told me, if someday we are not still together, we will have this film forever to show that it happened and that it was possible.”

She credits, in part, Sciamma who inspired her to take a risk on the other side of the camera, and filmmaker Hafsia Herzi’s “You Deserve a Lover,” which premiered in the Critics’ Week section in 2019.

“[Sciamma] helped me to have this career, and also my vision as a person, as an artist, as a director. She helped me to tell to myself, ‘I can’t only be an actress, I can also try to express myself in film,’ because I really need it and I really want it. Much of my courage is thanks to Celine,” she says.

Hezi’s low-budget love story also opened her eyes. “It was a movie made with no money and no preparation, and I was like ‘OK, it’s possible.’ A lot of women have inspired me,” she says.

“Paris, 13th District” is the latest from “The Sisters Brothers” director Audiard, who has previously taken both the jury prize and coveted Palme d’Or at Cannes. The film is almost the anti-”Emily in Paris,” gritty, real and shot among the modern architecture of multicultural south Paris, where a group of 20-somethings try to navigate relationships. The film reflects all the confusion of that age in our era of endless swiping on screens. “Everything goes so fast, even meeting people. It all feels so fast and that everything is possible, but at the same time nothing is really possible,” she reflects. The paradox of choice leaves human connection precarious at best. Audiard shot the film in black-and-white to give it a more timeless feel, and Merlant promises the film has a hopeful — if not happy — ending.

She’s currently shooting with another French legend, André Téchiné, before starting on two American movies that remain a secret. “I really want to, I even asked if I could, but …” she trails off. They’ll be shooting in the States soon. While she may be on the precipice of international fame, for the moment she’s just here, overlooking the sea, sitting barefoot and at ease in shorts: “I feel like I’m back.”