A new, potentially highly transmissible strain of the SARS-CoV-2 virus is cause for concern, experts say and will likely spread around the globe with two cases in hotel quarantine already detected in NSW.

But Chief Medical Officer, Professor Paul Kelly, who was appointed to the role on Monday, said there was no need to introduce tougher measures on returned travellers. 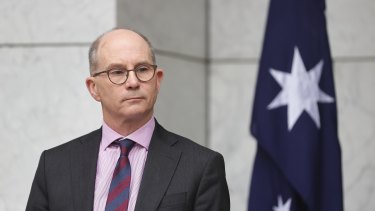 Chief Medical Officer Professor Paul Kelly said on Monday there was no need to stop people from England returning to Australia.Credit:Alex Ellinghausen

"Everyone coming from the UK is going into 14 days of hotel quarantine and they are of no risk as that quarantine works so successfully, as it has done for the most part here in Australia since the beginning," he said.

On the weekend British Prime Minister Boris Johnson ramped up restrictions, forcing non-essential shops to close and ordering households into lockdown to prevent a further spread of the virus.

The new strain, dubbed B. 1. 1. 7, is responsible for more than 60 per cent of COVID-19 infections in London. The UK's Chief Medical Officer Professor Chris Whitty said the strain was "beating all the others in terms of transmission".

Professor Edward Holmes, a virologist at the University of Sydney, said evidence around the new strain was troubling.

"This new virus variant – called B.1.1.7 – is clearly cause for concern," he said. "In the UK it is spreading faster than other variants and contains key mutations, particularly in the virus receptor domain, that have already been shown to increase infectivity in the laboratory."

Professor Holmes said although those cases were not in the community, it showed health authorities around the world needed to be on the alert for its spread.

"That this variant has recently been detected in returned travellers in quarantine in Australia – although importantly not in the community – shows that it is moving globally and will likely spread to other countries, if it hasn’t done so already," he said.

Epidemiologist John Kaldor, head of the public health interventions research group at UNSW's Kirby Institute, said it was very difficult to definitively estimate how much more transmissible one strain of a virus is from another strain.

"We still have to be on the highest level of alert in Australia, regardless of what we perceive to be the strain," he said. "We know the strain we have is bad enough in terms of transmissibility."

Professor Kaldor said further limits on returning travellers would be extreme because Australia has already taken an "aggressive approach" to prevent the spread of the virus including the 14-day hotel quarantine period.

"It's a really important reminder, not just to health authorities but to the public, that this virus is not over," he said.

More detailed studies on the strain were under way, and Professor Holmes said it was not possible to draw precise conclusions until they were completed but the UK government made the right call by reacting swiftly.

"The available evidence pointing toward enhanced transmissibility indicates that the UK government were correct to try and contain its spread as robustly as possible," he said.