Some romantics keep old photos in a shoebox. Others collect trinkets from the past. For Geraldine Viswanathan, words are what she holds dear.

"Everything handwritten, I've kept," said the Australian actress, who made a major leap from Blockers breakout to rom-com heroine in Sony's The Broken Hearts Gallery, released in cinemas on Thursday. "Every single birthday card. I'll even write down what people say sometimes because I'm a psycho. But any words that I want to remember, I hold on to forever." 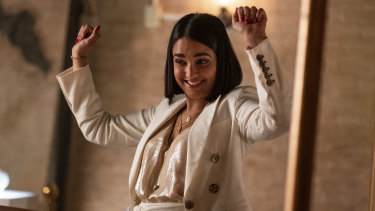 Geraldine Viswanathan, from Newcastle, NSW, in a scene from The Broken Hearts Gallery.Credit:AP

As a teenager she knew that memories can be ephemeral. So Viswanathan, now 25 and living in the US, had a ritual: she'd inscribe happy moments on sticky notes and keep them in a jar, and read them again at the end of the year. "Those little things that made your day, it's easy to forget them," she mused. "I should start doing that again. It was a good tradition."

Happiness jars: Not a bad idea for times like these.

Lucy, the 20-something New York City gallery assistant Viswanathan plays in The Broken Hearts Gallery, needs something a little more concrete. An outgoing aspiring curator who wears her heart on her sleeve, she clings so hard to souvenirs from failed relationships that her apartment is cluttered with mundane mementos of her exes: plane tickets, bags of string, even an assemblage of emotionally vivid doorknobs.

"Doorknobs! I wonder where she gets all this stuff," Viswanathan laughed. 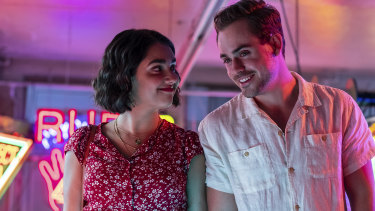 Viswanathan’s co-star Dacre Montgomery is also Australian, and shot to fame in 2017 with a role in Stranger Things. Credit:AP

Nursing a freshly broken heart, Lucy befriends the emotionally closed-off Nick (fellow Australian actor Dacre Montgomery, of Stranger Things), who's renovating his dream boutique hotel, and builds a gallery in his lobby enshrining tokens of loves lost. Artefacts pile up as strangers exorcise their romantic demons by donating to the collection, but nothing quite comes close to one item Viswanathan saw while researching the real museum in Croatia that inspired the story.

"I remember seeing a wound scab in the museum and that really affected me, because wow – that's really intense," she said with a laugh.

It's early morning and Viswanathan is calling from the Palm Springs set of a secret project she can't say much about. The project has, however, led to her spending some quality time with donkeys on a desert ranch, which tickles her and also explains a recent Instagram post in which she's posing with an Equus asinus, grinning mischievously, with the caption, "Check out my ass."

"Right now there's a cat rubbing against my leg, there are horses – every kind of animal you can imagine, we are surrounded by. As a horse girl, this is just heaven," said Viswanathan. She admits that earlier this year she spent much of the pandemic like the rest of us: devouring movies, journaling and cycling through existential quandaries.

"I did feel the pressure, I think we all did, of, 'What do we do with this time?' Are we supposed to be productive?" she said. What she's currently working on, she says, was born out of the lockdown and has been a welcome source of creative fulfillment. "I do just miss working on things with people," she said. "Alone in your room can be pretty uninspiring."

As she describes the creative freedom writer-director Natalie Krinsky gave her on set and the colourful lines about vibrators she improvised with co-stars Molly Gordon and Phillipa Soo, who play Lucy's best friends, Viswanathan interrupts herself with an excited shout. "Oh! The donkeys are arriving. I wish I could show you, I'm truly surrounded by donkeys!"

Just over a year ago, Viswanathan was filming Broken Hearts Gallery, which was executive produced by Selena Gomez and acquired by Sony in June. Initially set for a pre-Tenet theatrical opening in July, it moved to September when it was clear major chains would begin to reopen. It now arrives in cinemas where local guidelines allow – Viswanathan plans on catching it at a drive-in, at least – marking a new chapter in her career.

With her playful charisma and quick comic timing, Viswanathan made a splash in the 2018 Universal comedy Blockers as one of three high schoolers trying to lose their virginity on prom night. The next year she flexed versatile chops, joining Daniel Radcliffe on the comedy series Miracle Workers and drawing acclaim as a Muslim teen coming of age in the indie drama Hala, acquired by Apple+. 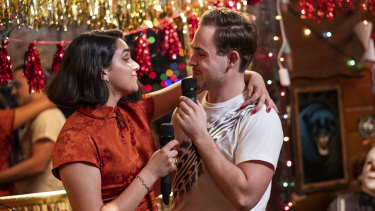 In the film, Viswanathan plays a broken-hearted woman who sets up a gallery of items from previous relationships in Nick’s (Montgomery) new hotel space.Credit:AP

The range impressed Krinsky, who'd written Broken Hearts Gallery in her twenties, landed it on the 2011 Black List (a list of unproduced screenplays with potential, started by film exec Franklin Leonard in 2004), and several years later made it her own directorial debut. Onscreen, Viswanathan exuded the screwball energy of a young Lucille Ball, but also showed she could mine more dramatic layers.

Viswanathan hadn't racked up too many Lucy-like breakups herself, other than a high school-era split. "It was very much growing pains of, where are you going to go in your life, and where am I going to go in my life?" she remembered. Broken Hearts Gallery, on the other hand, felt like an introduction to adult relationships and breakups, "how normal and inevitable they are, and the maturity that you have to have."

Reading the script, she fell quickly for the open-hearted Lucy. "She was so magnetic and had this infectious energy," she said. "Then I met Natalie Krinsky and I realised, oh – that's why."

"Sometimes scripts are like ex-boyfriends," said Krinsky, who recently pulled off her own multitasking feat during the pandemic: opening her first film within days of giving birth to her second child. "You put them on the shelf and think, 'Maybe someday we'll get back together.' [Broken Hearts Gallery] was like the long-lost love that came back into my life at a point when I was ready to direct the film."

Like Viswanathan, she still keeps meaningful notes and letters. And, like Lucy, she had a penchant for hanging on to unconventional objects – such as the partial tooth whitening tray she "collected" from a dental hygiene-obsessed ex. "You can't use half of a tooth whitening tray," Krinsky said with a laugh, "so it was both sentimental and payback."

In Viswanathan, she found a star who could embody the manic heights of her younger lovelorn self and the wisdom of a much older soul. "Geraldine at 25 years old is wise very much beyond her years, and I think that's partially because she's a real observer of life and human behaviour," said Krinsky, who surrounded her with a supporting cast that includes Arturo Castro, Utkarsh Ambudkar and Bernadette Peters.

To the actress, who went toe-to-toe with Hugh Jackman this year as a high school reporter in the Emmy-nominated HBO true crime dramedy Bad Education, Broken Hearts Gallery opened a door she hadn't thought possible in a genre in which women of colour rarely get to play fully dimensional characters, let alone the heroine.

"Everyone dreams of being the lead in a rom-com, right? It's a genre that I never really thought that I would be the lead of," she said. "I had accepted my fate as the 'best friend'. I mean, I love those '90s rom-com movies but [the stars] are all stunningly beautiful, model-like blonde women. It was always, 'OK, those are the girls we see in romantic comedies'." 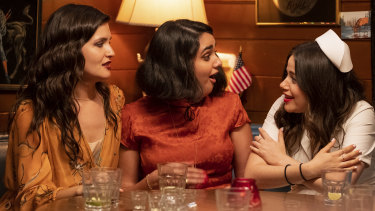 Montgomery, meanwhile, had been searching for a departure from Billy Hargrove, the troubled, aggro bad boy he played for two seasons on Stranger Things. A writer and director who also launched his own podcast last year and will publish his first book of poems in October, he was drawn to the notion that physical mementos can carry such symbolic emotion in the wake of love.

"I'm a bit of a romantic," Montgomery, 25, said by phone from Sydney. "I'm quite sensitive as well, and given that, oftentimes my relationships are quite intense. I love to love, and being a sentimentalist myself, I like this idea of objects having meaning in people's lives."

They discovered the opposites-attract energy Krinsky was looking for when Montgomery flew to L.A. to read with Viswanathan. The actor shared a shyness with his character that Viswanathan's ebullience coaxed out, a dynamic that helped ease Montgomery's terror in the audition room and later, he says, when he faced another phobia on set: filming a karaoke duet.

"Geraldine pumped me up and helped me get into it and so did the rest of the cast – but other than going into the room for an audition, it's my absolute worst nightmare. I kind of blacked out, to be honest," said Montgomery, laughing at himself. Between the karaoke and the improv that Krinsky encouraged on set, he found himself stretching new muscles. "That was a formative time that really pushed me in different directions."

Words hold special meaning to Montgomery as well, but rather than collecting them, he writes – an outlet that's felt even more essential these past several months. "Right now, through a period of isolation and solitude, I'm processing it all every day. I feel like there's this ether of it feeling like things have disbanded," he said, "like the whole human social consciousness is just floating in the wind at the moment. That makes me anxious as well, and the only touchstone I have is my laptop or a piece of paper to write things down on and process the imagery."

Viswanathan, too, takes a moment to ponder how the pandemic has brought everything – time, life, art, work – into focus. "I think we've all been reflecting on our purpose and nothing is promised, and we're all just fumbling around like life and the future is such an absurd and cold and beautiful experience that we're all forced through," she mused.

Since breaking into Hollywood, she says, the whirlwind has finally settled. She stopped living out of suitcases and got an apartment in Brooklyn. And when she needs to dip into her happiness jars and boxes of memories, they'll be waiting for her in her childhood bedroom. "I think I'm at a point of more accepting that this is my life now, and just having deep eternal gratefulness and joy that I get to do this," Viswanathan said. "To be a part of things that I feel bring light into the world."