Online trolling has been a huge talking point in netball this week after Giants captain Jo Harten was sent abusive messages following her team’s one-goal loss to the West Coast Fever in Perth. After spending the week preparing for a massive game between two undefeated teams in hotel quarantine, Harten was one of the best players on the court on Monday night, and should have flown east on Tuesday upset only that despite a masterful performance she couldn’t drag her team over the line for the win.

But no, instead she was understandably upset by the fact that after the match she was sent a series of not particularly imaginative messages blaming her for her team’s loss, and attacking her personally. Rightly she called it out and rightly she has received support from her team, her opponents, Super Netball and netball fans. 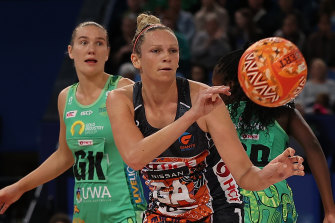 This all comes of course after I recently wrote that social media provides a platform for female athletes to have a voice and to use it. Here we are only a fortnight later and the downsides of social media are writ large in Harten’s – and plenty of other netballer’s – social media feeds.

It seems that while netballers are slowly catching up to footballers in terms of salary and media coverage, they are on a fast track to parity when it comes to social media abuse.

It wasn’t always like this of course. When I was a little girl I used to love watching the footy on television with my dad. I loved riding the highs and lows, getting super excited when our team won, and learning to accept defeat when things didn’t go our way.

Dad had plenty to say to the television when he felt his team wasn’t getting a fair go – whether it was from the opposition, the referees or the commentators. The thing is, this was all said in front of precisely three people – Mum, my sister and me. It was a scenario that played out in homes across the country every weekend, with those who played the game oblivious to the passions of the spectators.

Trolling is something that every athlete with a social media account has to deal with.

As a rule it’s only a little piece because let’s face it, if you are behaving that way you don’t have much to spare. But I digress.

It is a piece nevertheless, and this trolling is something that every athlete with a social media account has to deal with. Which is a shame, because for every troll there are a thousand beautiful souls who have your back, and who tell you not to take any notice, which is lovely advice, but incredibly hard to do.

This is because we are hard-wired to remember bad stuff in case it is a threat in the future. While this is good to help us navigate our way around lions and tigers and bears in the jungle or on the Savannah, it is no good in the age of social media. Ask anyone who has been trolled and they will tell you that the horrific things that get said to you online take a long time to get out of your head, if ever. Even if you rationalise it away, telling yourself that trolls don’t matter, that they are probably sad, lonely people with no family, no mates and nothing to do but radiate misery and hate, it still lurks there. 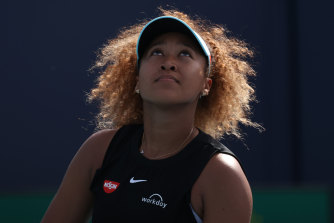 It doesn’t take long to get you down. It’s why Naomi Osaka has decided that she no longer wants to do media conferences. While she is obviously not being trolled in the media conferences, she objects to being asked to second guess herself. An innocent question can spin in your head and lead to negative thoughts. Over years that can add up to some pretty debilitating inner monologue, and so I absolutely understand and applaud Naomi’s decision to take care of herself first, and the media second.

So where does that leave Harten and every other athlete who is subject to vitriol on social media sites? It’s a tough one. Finally there is a platform to speak directly to, and interact with fans. Yet it has brought all sorts of nasty organisms out from under the internet’s darkest rocks.

It is tempting to just ignore the trolling. Delete and block are a pretty effective ways to banish them from your feed. But you still have to read it to know who to block, which gives trolls some of your precious mental real estate. Maybe the answer is to shine a light on the abuse, put it out there as Harten did, and acknowledge the hurt it causes. It may be enough to make someone think twice about being abusive when they realise that a real, live person is at the other end of it. Or maybe I am being too optimistic about the capacity of keyboard warriors to reflect and change.

Even so, it can’t be left to the athletes. It needs to be something that the leagues – in this country the AFL, NRL, ARU, Football Australia, Cricket Australia and Super Netball for a start – band together on and use their collective clout to demand better from social media companies. If they can’t banish the trolls from their platforms, perhaps it’s time for the sports, and their athletes to find a platform that will.