Fans of the animated Mulan from 1998, fear not. This expensive live-action version from Disney has everything you remember and more.

Well OK, it doesn't have singing. Forget the songs you grew up with: they didn't fit the vision of director Niki Caro from New Zealand (Whale Rider), who has now helmed the most expensive film ever made by a woman. 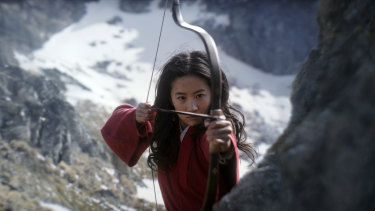 Disney’s Mulan is available to watch on Disney+ now, for a fee of $34.99. Credit:Disney

And there is no romance. Mulan does not fall for her commanding officer: that would not do in the age of #MeToo. Modern Disney heroines don't need a man! And don't look for Mushu, the irritating little dragon spirit voiced by Eddie Murphy in the original, because he was not at all popular in China.

Alas, there's hardly any comedy either in this dogged attempt to woo the vast Chinese market. But apart from the lack of singing, romance, comedy and a mouthy dragon, this is just like the original.

You might wonder what's left. Well, $200 million buys a lot of scenery and sets and quite a few stars. This new version has spectacle in mind. There are many large-scale battles between the invading Huns, with Jason Scott Lee as their leather-clad leader Bori Khan. And there is Gong Li shape-shifting from bird to beautiful witch, as his side. 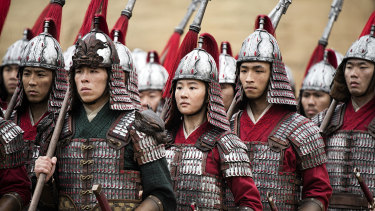 Jet Li sits on the throne in the Forbidden City and Donnie Yen steps into the role as Commander Tung, Mulan's general. The venerable Tzi Ma plays Mulan's father Zhou, a warrior who now walks with a cane. When the emperor calls on every family to send one man to fight the Huns, Mulan steals her father's armour and joins the recruits, her hair in a bun and her chest bound by tight cloth.

Chinese-born American actress and singer Liu Yifei does a reasonable job as the teen warrior and she handles the martial arts component with ease.

Disney was always on a hiding to nothing against the turbulent currents of social media, but we might wonder why they chose to remake a film that was so successful first time round, and so well-loved by children of the '90s.

The answer, of course, is money. Success is a self-replicating organism in Hollywood and the mainland audience is the new prize for studios. COVID, not without some irony, has shorn its aspirations for the big screen. The spectacle now depends on the size of your telly.