A mother has sparked outrage after sharing a picture of her daughter ‘taking a knee’ while holding a placard stating ‘privileged’ with an arrow pointing up at her child.

Helen Leathem, from London, posted a picture of her daughter kneeling on their doorstep while holding a poster with ‘privileged’ in rainbow letters and an arrow pointing upwards alongside ‘#blacklivesmatter’.

She tweeted the picture captioned: ‘My daughter helping to show our solidarity #TakeTheKnee’ which she accompanied with a raised fist emoji.

The post, which went on to be shared by another Twitter user Sydney Watson, quickly went viral online, with many people criticising Helen for the image.

Helen Leathem, from London, was criticised online after she shared a picture of her daughter kneeling on their doorstep, along with a sign reading ‘Privileged’

Several officers have adopted the pose in support of the anti-racism protests in London which were sparked by the death of George Floyd in the US and are now sweeping the world.

It is the first time police in the UK have used the bold stance and those that did outside Downing Street were applauded with whoops and cheers from the crowd.

However people responded to the mother’s decision and claimed that the child was not old enough to know the meaning behind the message.

Dr Karlyn Borysenko tweeted: ‘I sincerely hope this mother just did this for a photo op and the kid doesn’t actually know what any of this means.

The mother was widely criticised online after a tweet with the photograph went viral, with many questioning the decision

‘If you live your entire life with shame of who you are, particularly with the things you cannot change, you won’t really be living life at all.’

Ann-Mari Maukonen added: ‘Helen Leathem should NOT use her child like this! Shame on Helen!’

Another person commented: ‘That’s as bad as beating a dog that has no idea what the f it did wrong.’

One added: ‘So sick and twisted. Kids shouldn’t have any exposure to politics until late high school/early college.’ 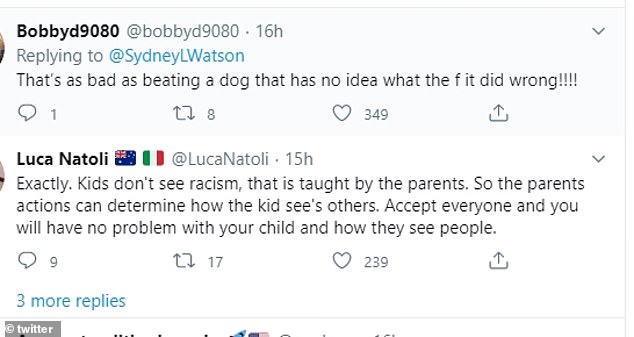 A fourth wrote: ‘Her expression is the most telling part of how ridiculous this is.’

The ‘take a knee’ movement started in the US with NFL star Colin Kaepernick and has become a symbol of anger and solidarity against racism across the world.

In the US, officers recently started taking a knee in support of protesters following days of unrest after Mr Floyd’s killing at the hands of police. 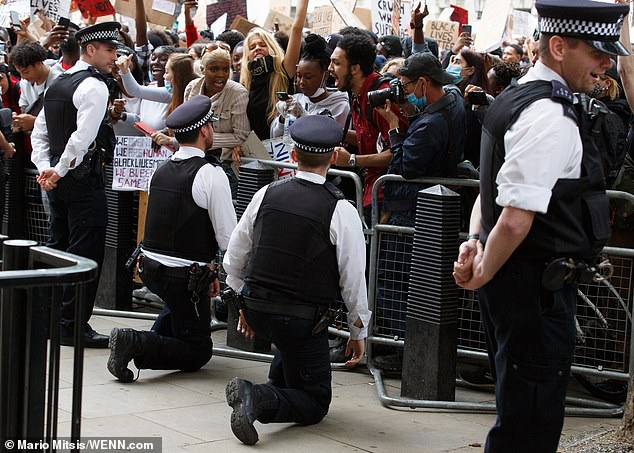 A London police officer who took the knee outside Downing Street yesterday revealed he did so to show his colleagues ‘are not racist’.

The officer, who is based in north London, said: ‘I did it because at the end of the day we’re all one.’

Police are generally advised by their senior officers to refrain from any behaviour that might bring their impartiality into question.

But the officer said: ‘I know I’m not racist and I know that my colleagues are not racist, so why not?

‘I came into the job to help people and it was a nice gesture. A few of us decided to do it.’