My little pony! Oprhaned miniature foal who was too tiny to be looked after by a foster mum is thriving thanks to being hand-raised by humans

A mother and daughter have revealed they’re hand raising an orphaned miniature Shetland pony – because he’s so small his owners couldn’t find him a foster mum.

Four-week-old Hank was born on May 15, but tragically, lost his mother when he was just two weeks old.

Devastated owners Jodie and Lorraine Waite desperately searched to find tiny Hank a foster mum – a common practice when a foal has lost a mother.

But due to his tiny 22-inch high stature, all possible foster mums were simply too big to look after him or lived too far away – with people even suggesting they get a foster goat.

However, the pair have now resolved to raise adorable Hank by hand – and the cute foal is thriving. 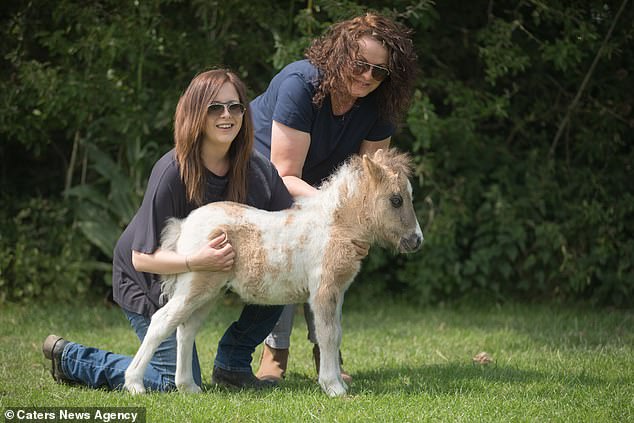 Four-week-old Hank was born on May 15, but tragically, lost his mother when he was just two weeks old. Jodie and Lorraine Waite, from Doncaster, took it upon themselves to look after the foal, who was too tiny to find a foster mother

The mum and daughter duo, who run Plumtree Miniature Shetland Pony Stud together, are thrilled the youngster seems to be coping so well after his loss.

Jodie, 33, said: ‘The reason we wanted a foster mum is for the social aspect, the mares teach them how to be a pony. From what I have read, hand-raised ponies can be very naughty.

‘It’s a lot of work to hand raise a pony. A goat could have been a foster mum years ago; before formula milk it was either goats or cows milk for orphan horses.

‘We’ve rang round, spoken to people with experience. We’re settling into a routine with him. We put him in the stables at night with a camera so that we can keep an eye on him and during the day, we put him in the paddock to play with the foals. 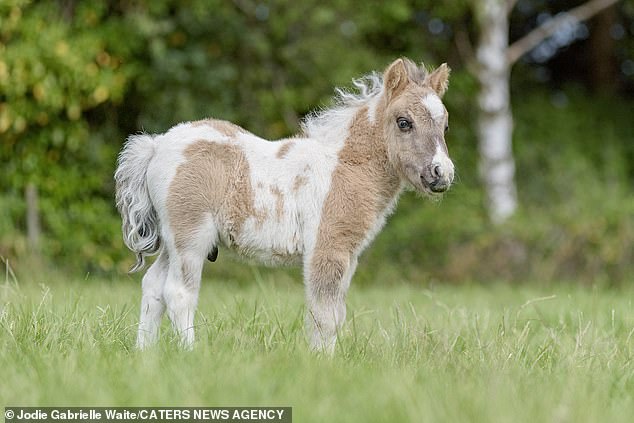 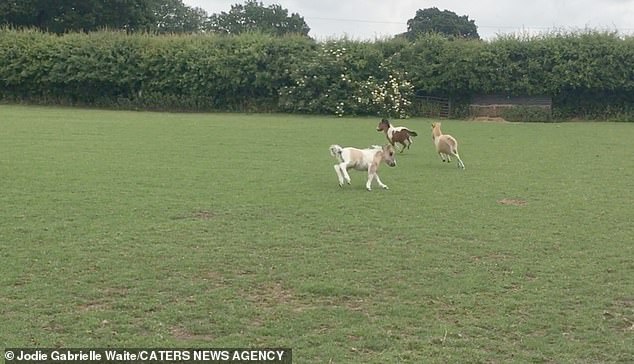 Hopping around the field with some friends. Hank is about the size of a medium dog, and has adapted well to his life with Jodie and Lorraine

‘He comes running to you when he spots the milk in your hands. He’s about the same size as a medium dog.

‘Mum has been breeding miniature Shetland ponies for 38 years and Hank is the first orphan we’ve had.

‘I have been brought up with them. I was very interested in them when I was young, then I turned into a teenager and was less interested. But when I was 22, my mum needed an operation so I had to look after the ponies and fell in love with them again.’ 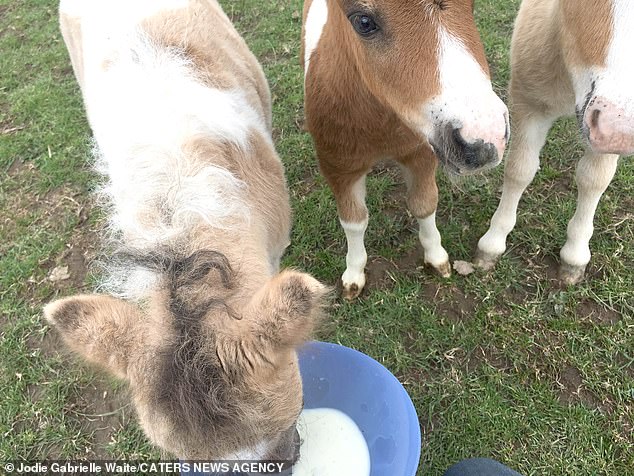 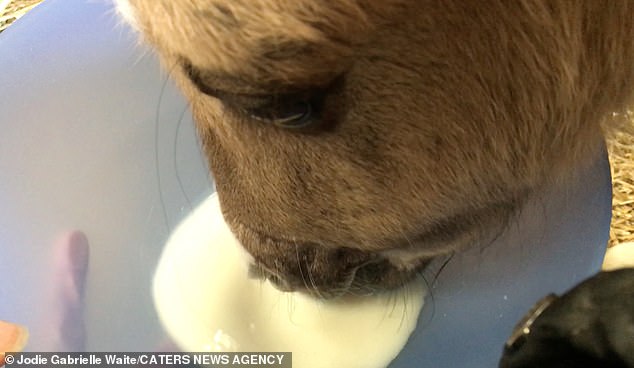 Hank enjoying his milk. Usually, orphaned foals would be taken care of by pony foster mothers, but the young foals was too tiny 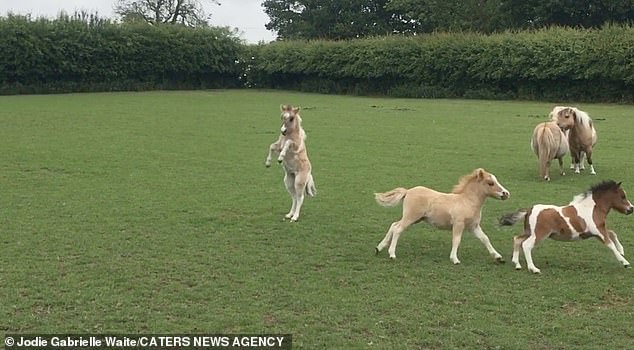 Horsing around with his pony friends. Lorraine has been breeding ponies for 38 years and knew how to take care of Hank

Hank’s mother, Henri, who was just 31 inches high, had to be put to sleep after having colic surgery and developing hyperlipemia.

‘When Hank got home from the hospital after Henri had been put down, he wasn’t drinking so we stayed up all night to try and get him to have his milk.

‘The next day, he was absolutely fine and we are so glad that he’s healthy and happy and doing well, considering what he has gone through in the past few weeks.’ 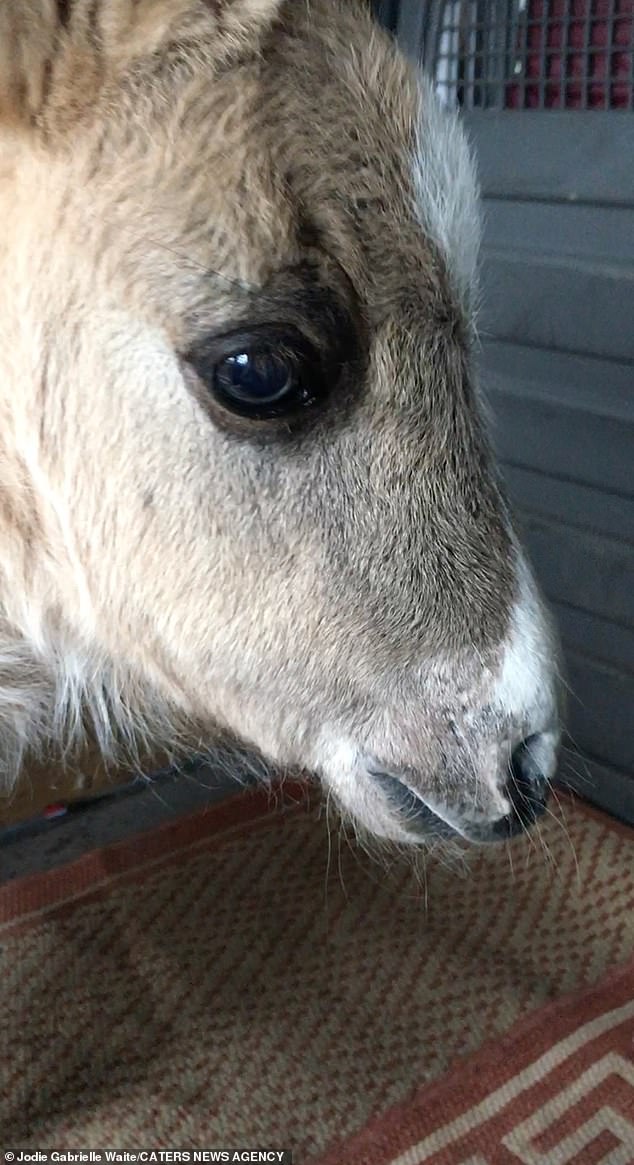 Hello gorgeous! The adorable pony is now thriving, only two-weeks after his mother’s sad passing 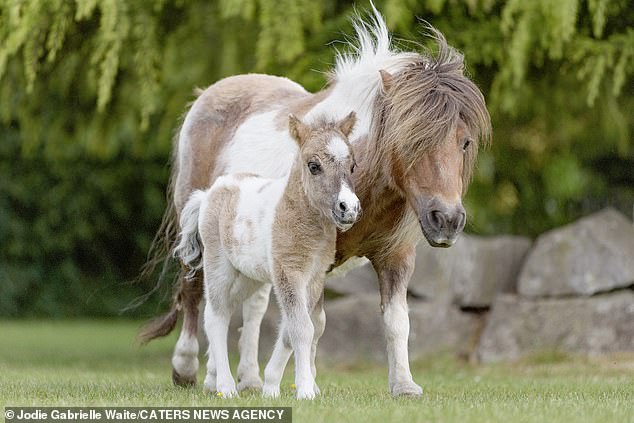 Hank next to his mother Henri before she passed. Henri had to be put down two weeks after Hank’s birth after developing hyperlipemia, a condition that affect ponies’s metabolism and leads to organ failure 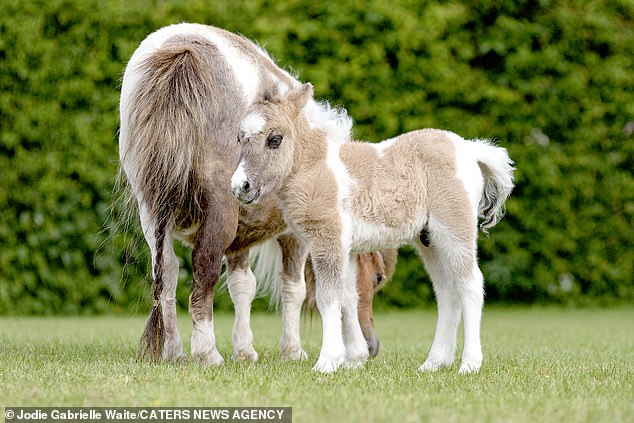