Iron Mike provided another piece of evidence that old habits die hard as he celebrated Thanksgiving prior to his comeback fight this Saturday. 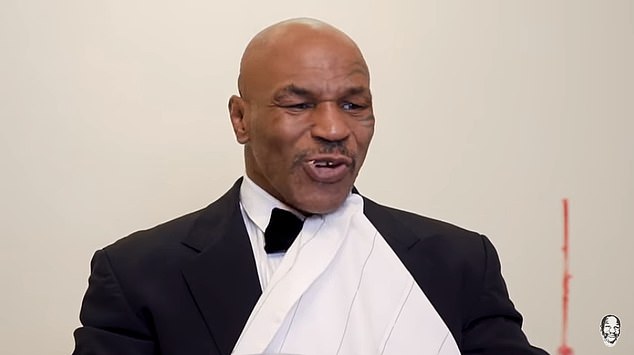 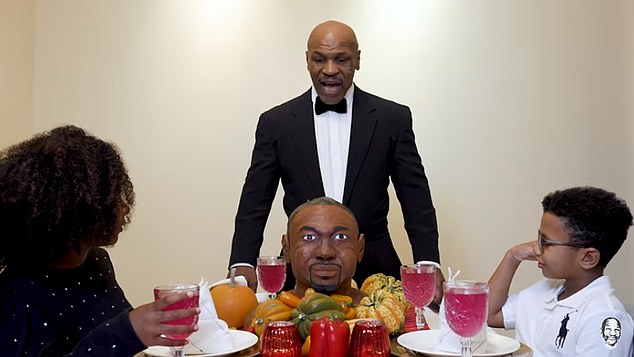 Fortunately, instead of tucking into his opponent’s flesh with his teeth, the Baddest Man on the Planet savoured a chunk of his foe’s earlobe in cake fashion this time.

The stunt comes 23 years after he caused worldwide controversy when he was disqualified for biting part of Evander Holyfield’s ear off in their grudge rematch for the heavyweight title.

Tyson, 54, is pulling on the gloves to battle fellow legend Jones Jr in a highly-anticipated exhibition bout that is already surpassing huge pay-per-view buys.

He decided to up the ante ahead of his comeback by sharing a snap of his pet pooch tucking into a cake designed in the face of his opponent.

Now he has followed that up by referencing the infamous moment with Holyfield in a new video titled 'Thanksgiving with the Tyson's' which the veteran carves up a cake of Jones Jr for his kids.

Presenting the cake to his children, Tyson says it is a 'turkey' before declaring: “I like ears.

“Tastes so much better than Evander's, Roy tastes real good.”

Speaking previously to Fox News about the Holyfield incident, he admitted his rage made him want ‘to kill’ the Real Deal.

Tyson said: “I bit him because I wanted to kill him.

“I was really mad about my head being bumped and everything.

“I really lost consciousness of the whole fight. It took me out of my fight plan and everything.”

Whether or not we see anything as vicious tomorrow when the two ex world champs, with a combined age of 105, go one-on-one in LA.