The A-list actor has been the butt of a joke on Kimmel’s late night show for around two decades. Every night, Kimmel jokes that Damon’s guest appearance on the show was bumped and says something like, “Apologies to Matt Damon, we ran out of time.”

The joke spawned a fake feud and even a friendship, as the “Jason Bourne” actor says he didn’t even know Kimmel when he first started making the comments. 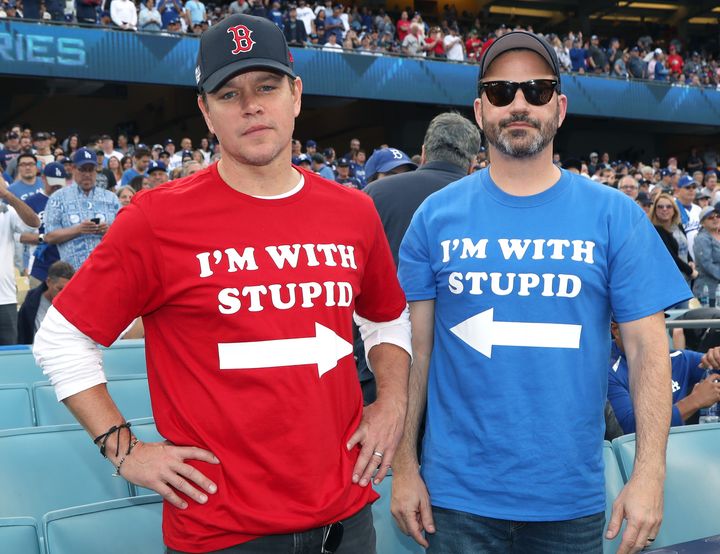 “People started to call me and ask like, ‘Hey, what’s your connection to this guy?’ And I’d never met Jimmy,’” Damon revealed on SiriusXM’s “The Jess Cagle Show” on Tuesday. “He literally pulled my name out of thin air one night.”

“And the way he told me this story, he said he had like a, he said ‘I had a ventriloquist and a guy in a gorilla suit as my guests. And I just said kind of as a throw away, my apologies to Matt Damon when we ran out of time,’ but he could have said Brad Pitt,” Damon said.

“He could’ve said, you know, George [Clooney] ― he could have said somebody else. But he just, for some reason, maybe I had a movie out that week or something, but he just said my name,” the star added. “And it changed the course of both of our lives. We’ve kept this a feud going for, you know, it’s gotta be 15 years now. I’ve had a lot of fun doing it.”

Kimmel has previously spoken about what led to him picking Damon’s name on the show many years ago, telling NPR in 2013 that the joke simply made his producer laugh.

“I decided to say, for the amusement of one of our producers who was standing next to me, ‘I want to apologize to Matt Damon. We ran out of time,’” Kimmel said. “And he got a kick out of it ― the producer ― so I just started doing it every night to amuse him.”

“Matt Damon was just the first name that popped into my head,” the comedian said. “I was trying to think of an A-list star, and somebody we absolutely would not bump if he was on the show.”

The joke has worked so well, Kimmel just kept using it.

“The legs on this bit are unbelievable to me. I mean, people laugh every time I say it,” he told NPR. “Repeating the same joke every single night, you’d think eventually people would get tired of it, but they don’t.”