Mars will appear like a bright reddish-star in the night sky on Tuesday as the Red Planet reaches its point of opposition with the Earth between it and the Sun.

It will be visible with the naked eye and appear slightly reddish in colour – looking through a telescope should allow you to spot surface features and polar ice caps.

Mars won’t appear this bright again until 2035 when the two planets are next in close alignment with one another – but should be bright until the end of October.

Although people should see the bright orange planet already, it will be at its best around 1am on Wednesday, according to the Royal Observatory Greenwich.

‘It’s a really good chance to view it – the last time this happened was 2018 but it was quite difficult for a lot of people to see because it was quite down in the horizon,’ explained Royal Observatory astronomer Hannah Banyard.

From the UK Mars will rise above the horizon at about 19:20 BST but will be best viewed after midnight – to see it look eastwards towards the constellation Pisces. 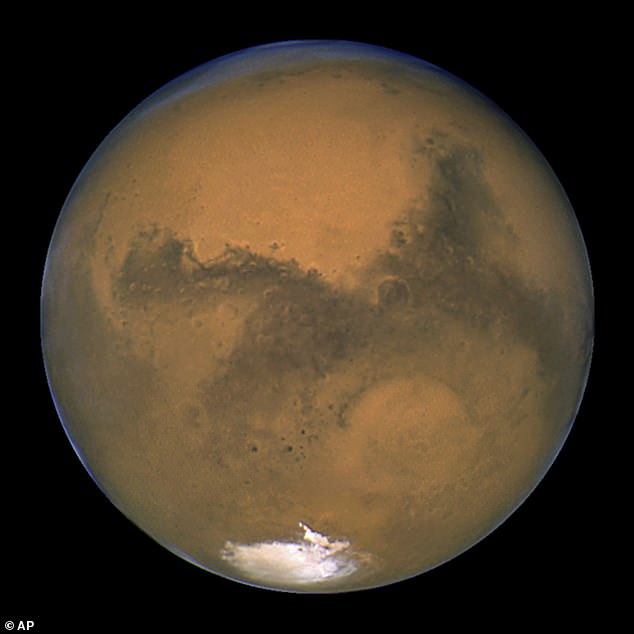 The Red Planet is at its point of opposition, with the Earth passing directly between it and the Sun and will appear ‘effectively as a full Mars’, according to NASA 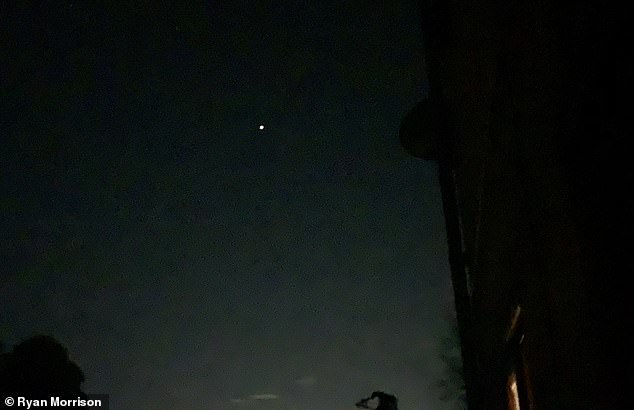 ‘For about a month or so now, it’s been quiet easy to see, as it’s getting close to opposition it’s rising earlier, so it rises from sunset and then you can see it and it gets up quite high into the sky, so it’s really easy to spot,’ said Banyard.

Opposition happens around every 26 months and is not set to occur again until 2023, although not all oppositions are equal, and this year was one of the closest since 2003.

Despite cloudy weather forecast for parts of the UK, Mars should be visible among any breaks and even through lighter cloud, Banyard added.

‘You can see it as a bright orangey-red looking star just with your eyes, but I recommend using at least a four-inch telescope with 24-millimetre magnification and then you’ll be able to make out some features on the surface,’ she said. 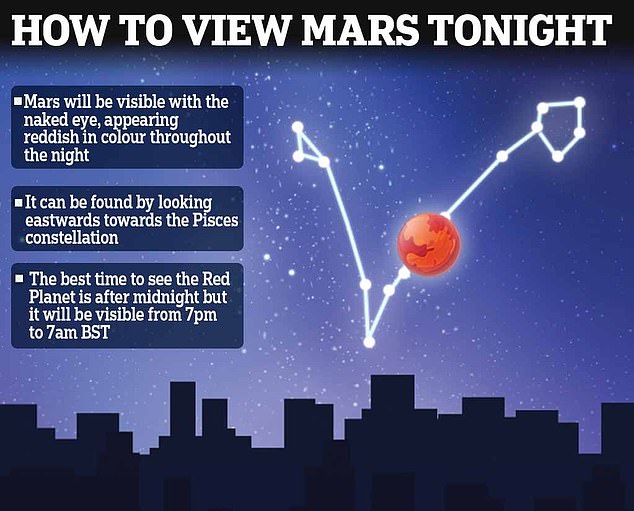 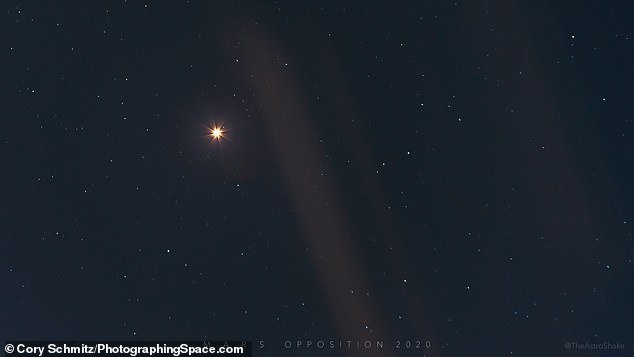 Cory Schmitz of PhotographingSpace.com captured this image of a ‘star-like’ Mars glowing lightly orange in the night sky

Mars goes into opposition with the Earth on Tuesday October 13 – the point it lines up with the Earth and the Sun – also known as the ‘close approach’.

‘Simply go outside and look up and, depending on your local weather and lighting conditions, you should be able to see Mars,’ NASA wrote in a blog post.

It reaches its closest point to Earth every two years, but not every close approach is equal, with distances varying by millions of miles even during the closest points.

The two planets aren’t on an exactly circular orbit – so every 15 or 17 years the gap gets a little bit closer – this year Mars will come 38.6 million miles from Earth. 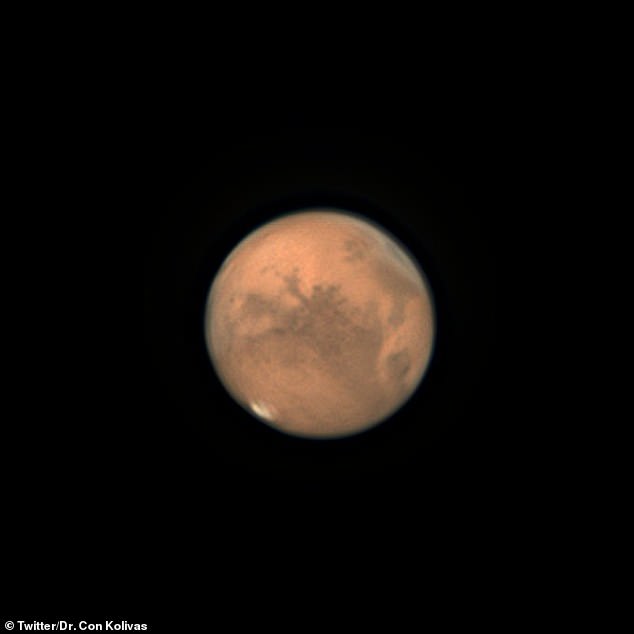 The actual closest point was on October 6 due to the slightly elliptical orbit of the two planets – rather than at the point where they are in direct opposition.

However, Mars will still appear bright throughout October and be visible with the naked eye – it won’t be this bright again until 2035.

‘If Earth and Mars had perfectly circular orbits, their minimum distance would always be the same. However, they have elliptical (egg-shaped) paths,’ NASA said.

‘In addition, gravitational tugging by planets constantly changes the shape of their orbits a little bit. Giant Jupiter especially influences the orbit of Mars.

‘The orbits of Mars and Earth are also slightly tilted with respect to each other.’

This is why the distances can vary between the two planets by millions of miles.

‘When Mars and Earth are close to each other, Mars appears very bright in our sky. It also makes it easier to see with telescopes or the naked eye,’ NASA wrote.

‘The Red Planet comes close enough for exceptional viewing only once or twice every 15 or 17 years’ and the next close approach is in 2035. 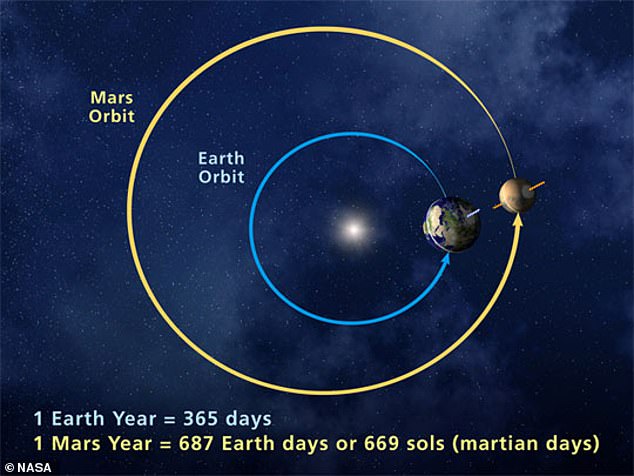 When Mars rises in the sky on Tuesday, EarthSky reports that it will appear like a ‘resplendent red star in the east every evening and in the west before dawn’.

‘Mars is easily the brightest starlike object to light up the evening sky’.

‘Generally speaking, Mars is at its brightest in 2020 throughout the month of October 2020. It is now shining more brilliantly than the planet Jupiter, and it’s not very often that Mars outshines the king planet,’ EarthSky added.

There are three spaceships from Earth currently on their way to Mars – NASA’s Perseverance rover, China’s Mars lander and orbiter and the UAE Hope Mars probe.

They are all due to arrive at the Red Planet in February 2021 and will provide Earth-based scientists with a plethora of new information.

Mars has become the next giant leap for mankind’s exploration of space.

But before humans get to the red planet, astronauts will take a series of small steps by returning to the moon for a year-long mission.

Details of a the mission in lunar orbit have been unveiled as part of a timeline of events leading to missions to Mars in the 2030s.

Nasa has outlined its four stage plan (pictured) which it hopes will one day allow humans to visit Mars at he Humans to Mars Summit held in Washington DC yesterday. This will entail multiple missions to the moon over coming decades

In May 2017, Greg Williams, deputy associate administrator for policy and plans at Nasa, outlined the space agency’s four stage plan that it hopes will one day allow humans to visit Mars, as well as its expected time-frame.

Phase one and two will involve multiple trips to lunar space, to allow for construction of a habitat which will provide a staging area for the journey.

The last piece of delivered hardware would be the actual Deep Space Transport vehicle that would later be used to carry a crew to Mars.

And a year-long simulation of life on Mars will be conducted in 2027.

Phase three and and four will begin after 2030 and will involve sustained crew expeditions to the Martian system and surface of Mars.