By day — or at least what constitutes day on Mars time — Brendan Simon-Chamberlain is a member of a group called the Jet Propulsion Laboratory (JPL), which currently is among a larger team overseeing the Mars Perseverance rover mission; stargazers likely read of Simon-Chamberlain’s recent exploits, as — in his role of Helicopter Integration Engineer — he helped pilot the Mars rover’s helicopter during its inaugural flight on the distant planet.

At night, or whatever Earth hour his daily duties on the Red Planet end, Simon-Chamberlain is Proud Father, his longtime and long-secretive music project that will release its first music to humankind, the space-rock concept album The View of Earth From Mars. The LP draws inspiration from both Simon-Chamberlain’s professional and personal experiences during his tenure at NASA.

The Best of Space Rock

Chasteness, Soda Pop, and Show Tunes: The Lost Story of the Young Americans and the Choircore Movement

4 Ways Venue Owners Can Connect With Audiences During the Pandemic

Speaking to Rolling Stone shortly after he was debriefed from the Perseverance mission, Simon-Chamberlain discussed the inspiration behind the album — which tells the story of the first astronaut to journey to Mars — and how his own meteoric rise at JPL left him both professionally and personally “purposeless.” It’s a theme that courses through the album. “This was the tool that really pulled me out from a sense of aimlessness,” Simon-Chamberlain says from Los Angeles of the LP, out July 16th via Massif Records.

“I had wanted to work at NASA pretty much my entire life. Really as long as I could remember, I was very singularly working towards that goal,” he says. “I can remember planning out my schedule in middle school to set up, ‘Okay, I know I need to take AP Physics in my senior year of high school, so I need to take these classes now to set myself up for that.’ It was very premeditated.

“And I think the thing that was unaccounted for about the journey was that it happened a lot sooner than I was expecting. I thought that this is something I would work towards for the entirety of my career, and maybe — just maybe — I would get to work for NASA after I had years and years of experience, and I ended up getting hired by JPL while I was still an undergrad, which was shocking. Flattering, wonderful, tremendous, but also a total wrench in my plans.”

By age 23, Simon-Chamberlain was already at the controls of Perseverance’s predecessor Curiosity. “It was such a strange existence for awhile because I was a kid, I was broke — I would take the bus instead of an Uber, and lose an hour but save $7 — and then go work on this multibillion project where they’d be handing me the keys of the vehicle, and it was very strange to grapple with,” he says.

As cool as operating a Mars rover sounds (and contrary to what sci-fi movies would have you believe) the actual operation of the vehicle is more like plotting out complex math equations than playing a video game: There is no joystick or push-button control panel that Simon-Chamberlain and his colleagues at JPL employ to scoot the rover around the uneven surface. Instead, Simon-Chamberlain and the team, after doing an “uncertainty analysis” on a potential pathway (“terrain evaluation”), transmit code to the rover and its helicopter millions of miles away on Mars. Based on those 1s and 0s, the rover embarks on its preset journey.

“It was, ‘Oh my gosh, this is a piece of hardware that thousands of people have put their hearts and souls into, spent their entire careers working on, just countless hours of effort [and] American taxpayer dollars,’” Simon-Chamberlain says. “This is a really unbelievably collaborative project, and to have such a phenomenal role at the endpoint, it was very interesting. My first thought was — and I think any sane person’s sane thought was — ‘I don’t deserve this.’”

“I was broke … and then go work on this multibillion project where they’d be handing me the keys of the vehicle.”

However, despite his instant-success in his career and the weight of the assignment, the ambitious Simon-Chamberlain struggled personally. “I had the same goal for 20 years, and it was gone,” he says. “So I went through this really challenging year of starting to really believe that I would never have a goal ever again; that my sense of purpose was over. Essentially, the classic problem of, ‘I think I peaked; I don’t think there’s anything beyond this.’”

To combat that and explore his own feelings, Simon-Chamberlain turned to Proud Father, a moniker he adopted roughly a decade ago to record music. What started as a “late 2000s indie-folk” project — “Frankly, it was bad,” he admits — eventually morphed into its current iteration, a one-man space rock outfit with both a bedroom-pop mentality and a bonafide astrophysicist pedigree.

“Music has been very important to me my entire life,” Simon-Chamberlain says. “And the process of this album ultimately was an exercise in self-exploration and catharsis. I didn’t really start it with the full intention of, ‘Oh, I’m going to make an album about space, because that’s what people want.’ It was truly, genuinely a way for me to unpack the emotional experience of what I was going through.” 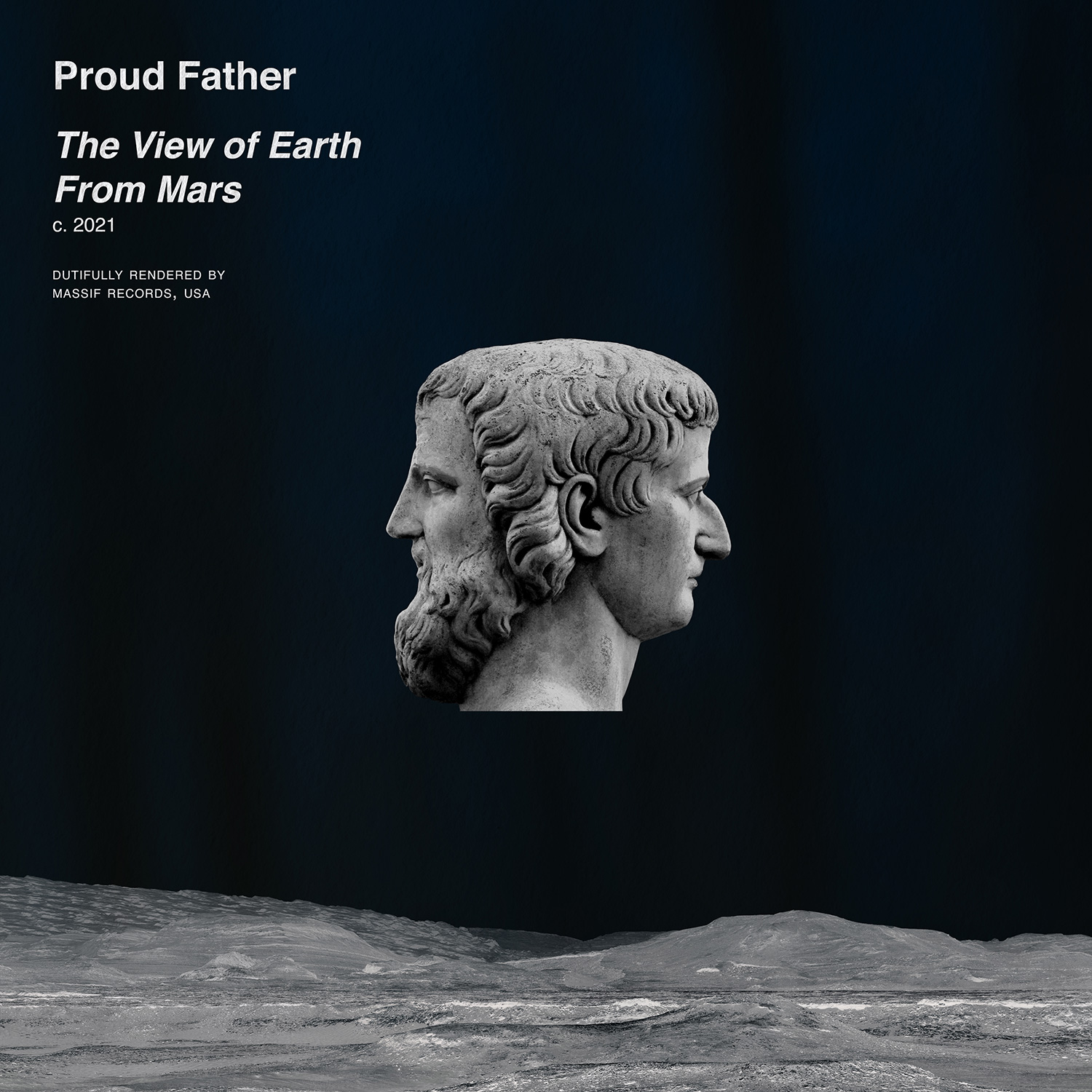 Conceptually, The View of Earth From Mars is not too distant from how astronaut Michael Collins — who died last month — felt as he hovered alone in the Apollo 11 command module as his colleagues Neil Armstrong and Buzz Aldrin bounced around on the Moon. Collins had reached the apex of mankind’s technological advances — the first manned mission to the moon — only to never touch the lunar surface. “I don’t deny a feeling of solitude,” Collins wrote in his memoir Carrying the Fire of his solo orbits around the moon. “I am alone now. Truly alone, and absolutely isolated from any known life. I am it.”

Early on in his musical endeavors, while Simon-Chamberlain proved himself capable at moving rovers millions of miles, he wasn’t nearly as proficient at mastering music programs like ProTools. “I was frustrated by the computer because I didn’t know how to make it sound right. I did the thing that a lot of people do is, ‘I’m gonna make it sound bad on purpose,” he says.

However, the goal-oriented Simon-Chamberlain ultimately gave himself a more astronomical touchstone. “I’m a big Radiohead fan — I know that’s not unique — and I’m particularly a fan of studio recordings that you can put headphones on and lay down on the ground and have it take you somewhere,” he says. “Music that is escapist and transporting. That’s my home base.”

The View of Earth From Mars unfurls over the course of eight space-themed songs, with each track plunging deeper into the astronaut’s increasingly disoriented and isolated state of mind. On paper, the album’s sound should be claustrophobic — “Every song has nine guitar parts and they’re all tuned differently,” Simon-Chamberlain says, maybe jokingly — but the production keeps it crisp and somehow spacious throughout.

“[The album] was genuinely a way for me to unpack the emotional experience of what I was going through.”

Ahead of the album’s arrival, Rolling Stone is sharing its first single and title track “The View of Earth From Mars,” a meticulous and mesmerizing slice of interstellar funk, with Simon-Chamberlain’s melodies like mantras one would sing to themselves if they were alone in a pod hurtling through space. Other tracks include the dream-pop stunner “LC-39A,” the celestial-scraping centerpiece “Victoria Crater” and closer “Perigree,” which sounds as if early Smashing Pumpkins were produced by Apollo-era Brian Eno.

Oddly, Chamberlain was not a fan of the space-rock genre, or science-fiction in general: He admits he is often teased by co-workers because he’s never seen a single Star Wars movie or Star Trek series. (To reiterate, somehow, he has never seen a Star Wars movie.) Instead, his definition of space-rock is “What music would I listen to if I was in space?” His first pick, he says, would be the Blue Nile’s “The Downtown Lights.” Chamberlain’s mentor at Columbia University, astronaut Michael Massimino, told him he listened to “a lot of Bruce” [Springsteen] during his time in space, “but I think that’s because [Massimino] is a Jersey guy,” Chamberlain says. (Massimino is actually from Long Island; close enough but practically a galaxy away.)

Someday he might fulfill his middle school dream of becoming an astronaut, but for now Simon-Chamberlain credits the Proud Father album with helping him to establish new goals, both musically and professionally; performing live for the first time is something he’s considering post-pandemic, if he can figure out how to bottle the album’s spacious and admittedly “extremely indulgent” production into a live setting.

As for his next project on another planet, Simon-Chamberlain says, “I think there’s still a lot for me to aspire to, in terms of my level of involvement, and really what it comes down to at JPL is your level of responsibility.”

Asked in what year The View of Earth From Mars could, optimistically, take place, Simon-Chamberlain settles on 2042. “I would like to believe in a mankind that will make that happen in my lifetime,” he says. “I’m obviously a believer in space exploration; I think it’s something worth doing, and if we continue to invest in it, I don’t think there are technological showstoppers that would prevent that from being possible.” Simon-Chamberlain has a more tempered timeline than SpaceX founder Elon Musk, who has set a goal of 2026 for mankind to reach Mars, despite his recent admission about the mission, “Honestly, a bunch of people will probably die in the beginning.” As the legendary Polish sci-fi writer Stanislaw Lem wrote in The Chain of Chance, “We’re not meant for the cosmos, and for that very reason we’ll never give up.”