A Connecticut man who authorities said was filmed violently crushing a police officer with a riot shield during the U.S. Capitol riot has been arrested and charged related to the incident.

The 23-year-old was among a mob of supporters of now-former President Donald Trump that were attempting to physically force their way into the Capitol during the Jan. 6 riot, authorities said.

McCaughey, in a YouTube video cited in the criminal affidavit, is seen pressing a clear police riot shield against Metropolitan Police Department Officer Daniel Hodges, who is seen painfully pinned between two doors in a tunnel. As he presses against Hodges, McCaughey is repeatedly heard telling the officer to “go home.” He appears to warn Hodges that he’s “going to get squished,” according to the affidavit.

McCaughey’s efforts appeared to have been aided by fellow rioters who took shifts in using their physical force to press against the officers, in effect further injuring Hodges, who appeared to be crying out loudly in pain, the affidavit notes. 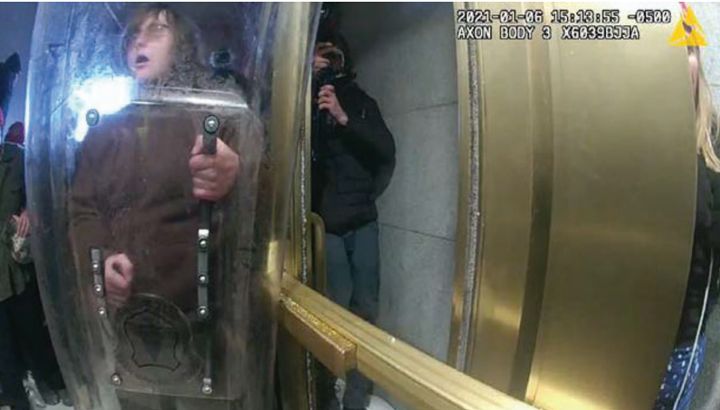 “The vicious attack on Officer Hodges was abhorrent and quintessentially un-American,” said Acting U.S. Attorney Michael R. Sherwin. “It is my pledge that anyone involved in violent attacks on law enforcement at the U.S. Capitol on January 6 will be prosecuted to the fullest extent of the law.”

Hodges survived the attack and later told reporters that he would have stood up against the mob even if it wasn’t his job.

“It was absolutely my pleasure to crush a white nationalist insurrection, and we’ll do it as many times as it takes,” Hodges said.

Five people died as a result of the riots. These deaths included Capitol Police Officer Brian Sicknick, who was pepper-sprayed and bludgeoned with a fire extinguisher.

The FBI has continued to request information about anyone who may have incited or promoted violence at the Capitol. Information can be submitted by calling 1-800-CALL-FBI (800-225-5324) or by visiting: fbi.gov/USCapitol.