Magazine comes under fire for calling Queen Maxima of the Netherlands daughter and heir to the Dutch throne Amalia, 16, as ‘plus-size’ on its front cover as critics claim it’s ‘dangerous’ and ‘disrespectful’

A magazine has come under fire after it described the 16-year-old heir to the Dutch throne as ‘plus-size’ on its front cover.

Princess Amalia, the eldest daughter of King Willem-Alexander and Queen Maxima of the Netherlands, is pictured alongside her mother on the most recent issue of Caras, a celebrity gossip and royal news magazine published in Spanish and Portuguese.

Social media users and media outlets from Maxima’s native Argentina have blasted the magazine for using the term to describe the teenage royal, saying it is ‘dangerous’, ‘disrespectful’ and ‘shameful’. 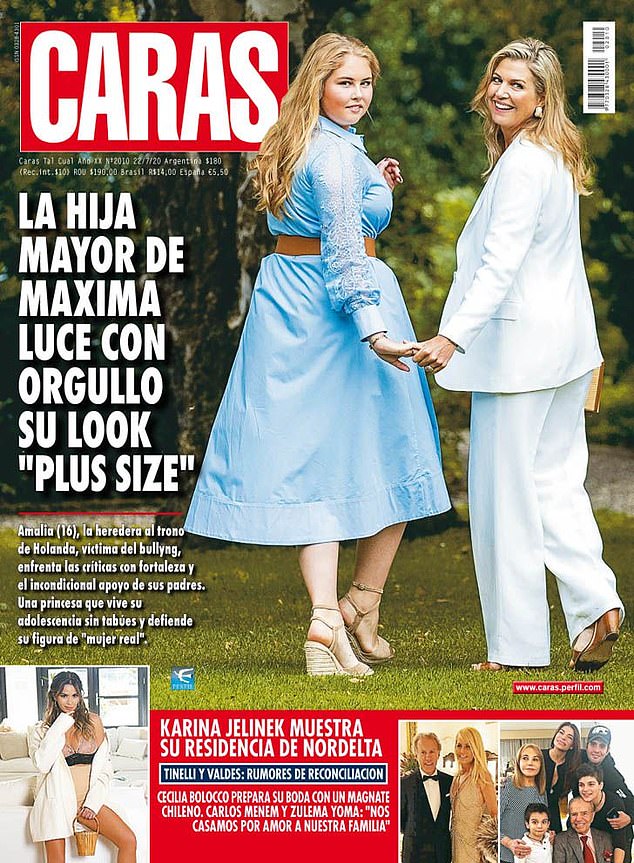 Princess Amalia, the eldest daughter of King Willem-Alexander and Queen Maxima of the Netherlands, is pictured alongside her mother on the most recent issue of Caras, a celebrity gossip and royal news magazine published in Spanish and Portuguese. The headline, once translated, reads: ‘Maxima’s oldest daughter proudly wears her “plus-size” look

In response, the magazine released a statement saying the story was designed to tackle stigmatization and inspire readers who might be struggling with their own body confidence issues.

The front cover photo shows Princess Amalia in a blue dress alongside her mother Queen Maxima during a summer photo call at their residence, Palace Huis Ten Bosch. The photos were released by the Dutch royal family.

A subhead, once translated reads: ‘The harassed heir to the throne of the Netherlands faces criticism with force and with the support of her parents. A princess who goes through puberty without taboos and defends her figure of “real woman”.’

The 16-year-old has never spoken publicly about any issues with her body image or instances of bullying. 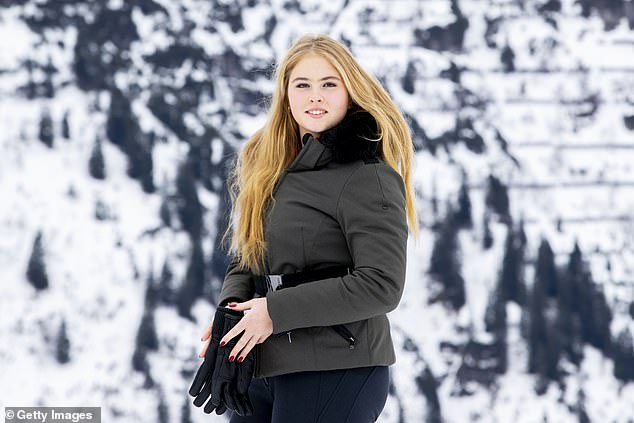 Princess Amalia, pictured in February, is the eldest daughter of the Dutch King and Queen

Caras’ post attracted thousands of comments, with many arguing it’s inappropriate to focus on the young royal’s body rather than her achievements.

One wrote: ‘You have to be very nefarious to propose/ approve this cover. They belittle her Amalia, a beautiful, sensitive and intelligent teenager playing cool. They talk about bullying and they are doing it to them. And they give a very dangerous message to the girls of 16 who read.’

Writing in Spanish, another said: ‘Chubophobic, violent and irresponsible cover. For people like you are, we are one of the countries with the highest number of cases of eating disorders in the world.

‘Are they are aware of the damage they do? ENOUGH to pass judgement on people by their physique!’

A third added: ‘They say that she looks proud of her “plus-size” look and then say that she is a victim of bullying. They are disgusting, they are late and they have a shameful social irresponsibility. Whoever she is, she is a 16-year-old girl with a real body that must not be objectified or stigmatised.’

Hector Maugeri, who is a director at the magazine, wrote a lengthy caption alongside a photograph of the cover to acknowledge the backlash on his personal Instagram account.

He wrote: ‘The magazine is not yet in the kiosks and it is already TT on all digital platforms. The story of Amalia, Máxima’s daughter and heir to the throne, is a story of self-improvement and resilience. 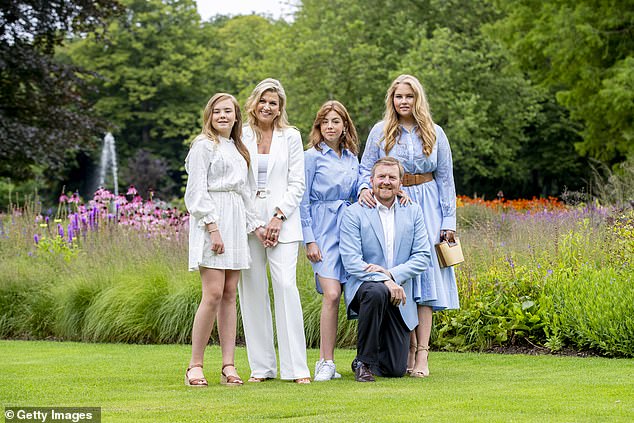 Hector Maugeri, who is a director at the magazine, has stood by the publication’s decision to use the controversial title. Pictured: King Willem-Alexander, Queen Maxima, Princess Amalia, Princess Alexia and Princess Ariane of The Netherlands at their summer photo call

‘The teenager, after having undergone brutal bullying during her childhood (something that Máxima also suffered and commented on on more than one occasion) managed to overcome it along with the love of her family, and above all, believing in her and in the woman he wants and chooses to be.

‘CARAS is a magazine that always gave “voice” to those that society once tried to silence. We are not qualifiers.

‘We are communicators and this week, Amalia’s story is an example for other girls who could – or go through – the cruelty of those who only know how to see darkness and not light.’

Argentine newspaper La Nacion spoke to many who believe Caras’ attempt at joining the body positivity movement was misguided – including feminist Florencia Freijo.

The Dutch Royal family hasn’t commented on the magazine cover.