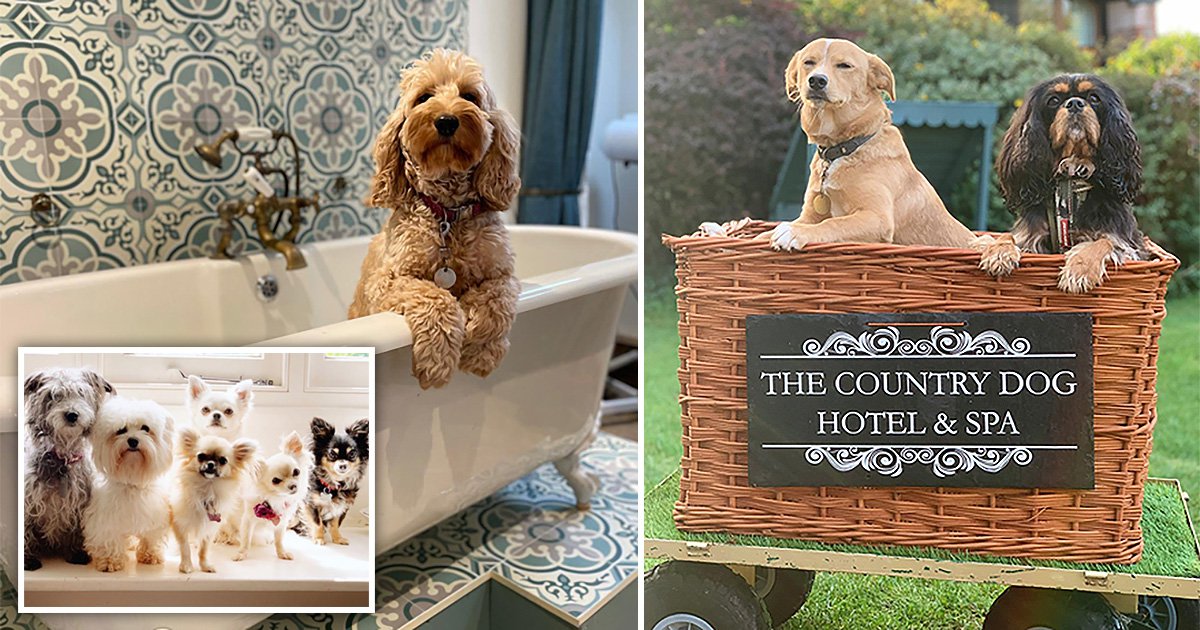 Business has been booming at a luxury hotel in Somerset over the course of the pandemic, despite the fact that lockdown ground the hospitality industry to a halt.

Their secret? For £40 to £80-a-day, they cater exclusively to pampered pooches.

The fully-booked hotel has hosted dogs belonging to the likes of TV presenter Lorraine Kelly and football legend Harry Redknapp.

The Country Dog Hotel is an 18-room farmhouse set in 10 acres in the Quantock Hills near Taunton, run by Rebecca Linnell, 40, with her partner Michael Walton, 33, a former teacher.

Rebecca said: ‘Our hotel is very bespoke, with no humans allowed outside the lobby unless they are inspecting our facilities for their dog.

‘The dogs have a toy room, a snug, a lounge, a library for older dogs to keep away from puppies full of energy, and a biscuit bakery with an Aga in the kitchen, a dog cinema, and we’ve just opened our first dog spa.

‘Dogs generally don’t like being alone in their room like human hotel guests, so they sleep in the 18 rooms in the farmhouse, usually sharing rooms.

‘They can sleep by a warm Aga or on a bed.

‘Most clients now have our VIP package, and many of them say their dog likes sleeping with a human in a bed, so one of our team will sleep with them on the bed. Some dogs can suffer separation anxiety otherwise.’

With amenities such as trips to the beach and beauty treatments on offer, Rebecca’s guests have so much to enjoy that many of their owners say they wish they could stay too.

Rebecca, who lives with Michael, their children and three mixed breed rescue dogs, laughed: ‘A lot of owners say they think their pet probably had a better holiday than they did.’

No-doubt this has especially been the case over lockdown, as people have had to stay indoors and shy away from others while these dogs have been able to have free rein at this lux hotel.

Rebecca and Michael opened the fancy four-legged-friendly establishment after noticing a gap in the market for luxury home boarding when they were moving house in late 2016.

Rebecca said: ‘We knew we were taking a big risk setting this up, but I love dogs.’

As well as having worked in recruitment, she had experience working in rescue kennels and with a rescue group in Thailand, so she felt pretty qualified for the task.

She said: ‘In the library we might put on Classic FM, so the dogs can enjoy a relaxing snooze – a bit like the way grandparents are at Christmas.

‘While they don’t read the library’s books, they show a lot of interest in our outdoor cinema and love watching TV.

‘We put on dog popcorn and dog-related films, because it’s a tailored holiday.

‘We have films like Beethoven, Marley & Me and the Cats v Dogs TV show.

‘Some dogs really do actually watch. Some howl and bark at the screen – although others don’t have a clue and don’t show interest.’

For those who don’t want to chill out on the sofa, there’s a wealth of space to run around in.

Rebecca said: ‘The bored ones have three and a half acres fenced off where they can roam off-lead.

‘For other entertainment we sometimes have an acoustic guitarist in playing them live music and they can join the cooking of their biscuits in the Aga.

‘They can enjoy the garden, we take them for walks in the countryside and drive them to lots of different beaches.

‘Some dogs, like the retrievers, love a swim in the sea. It’s a real treat for dogs from cities like London.

‘We also take them to Cheddar, where there is a specialist dog café that just makes dog biscuits and dog cakes, and they go to famous sites like Glastonbury Tor.

‘And we put on dog shows. An online one recently raised over £3,500 for the Wild at Heart Foundation.’

As well as hiding treats like peanut butter inside toy rubber Kongs scattered around the building for guests, lonely dogs and pining owners are able to keep in touch with each other by video, through Messenger from Facebook catch-ups.

At the end of their stay, the dogs are given personalised biscuits, balls and bowls with their names on, along with going-home treats.

Human needs are also accounted for, with chauffeured collection and drop-offs available for animals from as far away as London in a Land Rover Defender, and they will even meet dogs at the airport.

Rebecca said: ‘We want owners to be able to go away themselves and be guilt-free, knowing the dogs will love their stay.

‘When the dogs leave, our staff often get licks on their face or a paw – although we must admit they don’t do very well on tips!

The hotel also offers standard grooming and clipping services, ear, nail and teeth treatments, mud packs – which are good for de-matting fur – and even massages.

Rebecca said: ‘There’s a jacuzzi, which is an adapted wooden hot tub, but the water is not hot and a paddling pool.

‘And if they’ve been rolling in the mud we give the dogs baths, so they look fluffy.

‘But we are careful not to humanise them and only lay on things that dogs enjoy.

‘We also try not to be gimmicky. The only time we would ever think of putting on a funny accessory like a hat is maybe at Christmas, when everyone does.’

Some celebrity owners naturally prefer to remain anonymous, however Lorraine Kelly is happy for people to know how much her border terrier Angus loves staying at The Country Dog Hotel.

On the subject of some other patrons, Rebecca said: ‘One cavapoo we had to put on a private jet back to its owner in The Bahamas.

‘We’ve also had one dog guest here for a year and a half because Covid has left the owners stuck in South Africa.

‘But the great thing is that dog ownership attracts all kinds, so we’ll also have a dog from a local old man who just wants to treat his pet to a lovely time.’

Making dogs happy all day might sound like a delightful line of work, but Rebecca, a self-confessed workaholic, says running a luxury dogs’ hotel is not for the faint of heart.

‘We can’t go away much, although for my 40th in July I have booked to go to the Bahamas for two weeks – but it’s to a dog sanctuary!’

Nightly stays cost from £40 to £80 for a VIP package, and the No Vacancy message goes out once the hotel has a maximum of 10 dogs.

Rebecca said: ‘We are booked well ahead, and we’ve even had a request for 2023 already. Some regulars book their own holiday around when we can take their dog.

‘Although people might do more staycations now with Covid and be able to take their dogs with them on holiday, we aren’t worried.

‘We are now just about to open a second hotel in Somerset for smaller dogs.’

Rebecca says their reputation is so good that, rather than advertising, their bookings come through social media and word of mouth.

She said: ‘We don’t advertise. Messenger has proved the most successful way of keeping in touch with clients and letting potential customers find out more about us.

‘Most of our business comes through that, so we’ve taken on two extra staff to keep up our presence there and answer any queries we get.

‘We also used Messenger to build up a register of 5,000 dog fostering volunteers during the pandemic, to help key workers and patients in hospital who could not get care for their pooches.’

Even though her work can be demanding, Rebecca says she wouldn’t have it any other way.

She said: ‘Of course there are people who think we’re barking mad for doing this, but we love it.’